What 4 Economists Say About The State Of The Union

The State of the Union is back on after Speaker of the House Nancy Pelosi said she invited President Donald Trump to address Congress and the nation on Feb. 5.

Earlier, she had disinvited the president from giving the speech in the House on the originally scheduled date of Jan. 29.

While we await Trump’s address, we asked four economists to give us their own assessments of the state of the union, as well as the president’s performance so far. Each picked a theme. 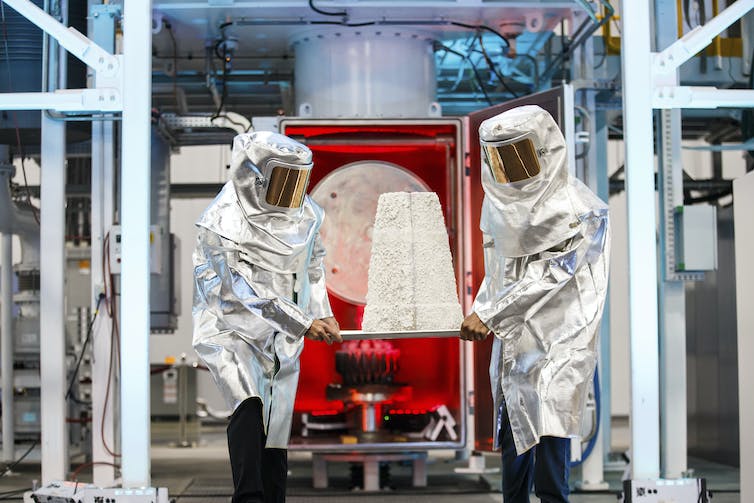 A new joint venture between Siemens and Chromalloy in Gibsonton, Florida, is creating about 350 new jobs on a $139 million investment. AP Photo/Casey Brooke Lawson

Business investment, the lifeblood improving the nation’s standard of living, has been one of the big economic bright spots fueling strong growth in the past couple years.

Combined with a healthy labor market, solid spending on new plants, equipment and intellectual property are all achievements in this near-decade-long expansion. Without it, expanding possibilities and the promise of new horizons for the next generation could be lost.

Signs suggest the party is about to end.

The biggest gains in investment are in energy, telecommunications, automotive and technology sectors.

While the Trump administration may want to claim credit for the investment by pointing to its tax overhaul from late 2017, the Tax Cuts and Jobs Act of 2017 was not responsible for the strong investment. Rather, it was healthy financial markets, strong global economic growth and rising corporate profits that deserve most of the credit.

Indeed, the pace of business investment was similarly strong in 2017, with no notable improvement after the tax law passed that December. And a recent survey showed that the vast majority of businesses said they did not change their hiring or investment plans as a result of the tax cut.

Looking forward, trouble seems to be brewing in terms of business conditions. China’s and Europe’s economies are slowing, and financial conditions are tightening as equity markets wobble and the Federal Reserve continues to raise interest rates and trim its enormous balance sheet. As a result, economic forecasters are lowering their growth outlook for 2019, while the risks of recession are rising.

In all likelihood, those warning signs should put a damper on business investment. 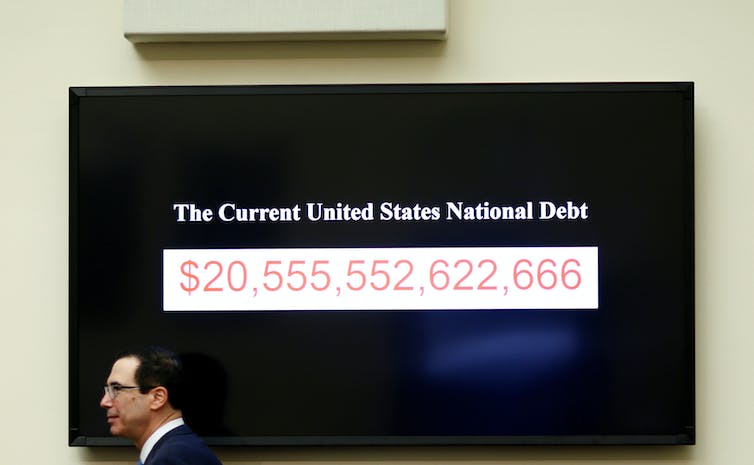 State of the national debt: Sky’s the limit

As a candidate, Trump promised to eliminate America’s national debt in eight years through faster economic growth. How’s he done so far?

The budget deficit – or the difference between government revenues and spending – is what changes the national debt. After falling continuously from $1.4 trillion in 2009 at the end of the Great Recession to $585 billion in 2016, the U.S. budget deficit has risen during the Trump presidency. It hit $779 billion in 2018, the highest level since 2012, and is expected to reach $900 billion this year.

The two main forces driving this are greater spending on the military and disaster relief and the 2017 tax cut, which reduced corporate income taxes by $92 billion.

The Trump administration, and the Republicans who pushed for the tax cut, promised that economic growth would increase tax revenues and offset the losses. Most economists, including me were skeptical that corporate tax cuts would substantially increase investment and economic growth. So far, the data supports the skeptics.

The greatest problem, however, is that budget deficits should fall during economic expansions. This provides more policy flexibility whenever the next recession hits.

During recessions, tax receipts fall and government spending rises, pushing up the deficit. The appropriate fiscal policy response – increase the budget deficit even more – becomes harder the larger it already is. 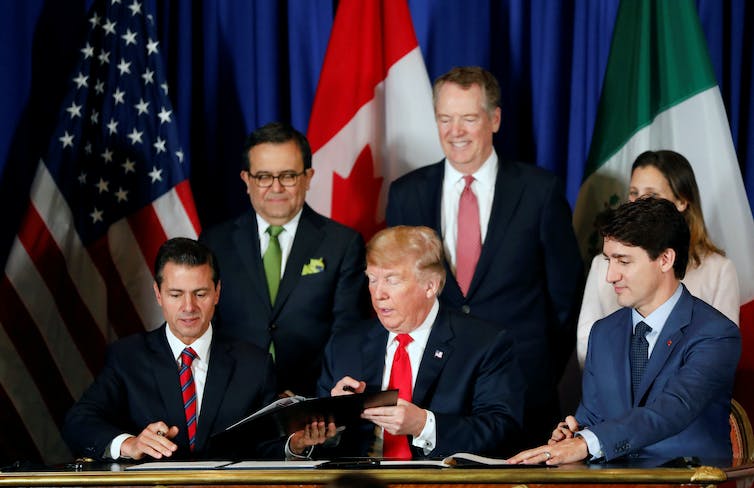 American trade with the world is crucial to the U.S. economy, exceeding 25 percent of gross domestic product. But with uncertainty over tariffs, trade wars and trade agreements keeping U.S. businesses on their toes, the state of trade is in flux.

The raw numbers tell a mixed story. After increasing for six straight quarters, the brunt of strong foreign retaliation over Trump’s tariffs pushed U.S. exports down 1.24 percent in the third quarter of 2018, the latest data available. It’s the biggest fall since the depths of the Great Recession in 2009.

At the same time, imports jumped that quarter as U.S. companies wary of higher tariffs on Chinese goods stocked up. Imports from China surged 11.1 percent, the most since 2011.

As a result, America’s trade deficit with the world – one of the president’s most-cited metrics and a reason he’s fighting his trade wars – widened to a 10-year high.

The Trump administration has spent the better part of the past year escalating its war of words and tariffs with China, with tit-for-tat trade barriers being hurled back and forth. Trump’s tariffs on $200 billion of Chinese goods were set to ratchet up from 10 percent to 25 percent in January until he and Chinese President Xi Jinping agreed to a three-month truce to come to a deal. The deadline is March 1.

But rather than leading to Chinese concessions, Trump’s strong-arm negotiating tactics have led to a new suit this month against the U.S. at the World Trade Organization. And, despite continuing to push hard on Chinese telecom giant Huawei, there’s now talk that the Trump administration’s tariff stance may be softening.

All of this uncertainty together with the higher tariffs are starting to hurt markets as well as companies like U.S. manufacturing bellwether Caterpillar and iconic motorcycle maker Harley-Davidson.

Another major area of concern has been the renegotiation of the North American Free Trade Agreement, which lasted some 18 months and resulted in a deal that looked strikingly similar to the original. There were some modest changes for the dairy and auto industries, but by and large it was the same old agreement.

Nevertheless, Congress still needs to actually vote on the new deal, known as the U.S.-Mexico-Canada Agreement, and newly empowered Democrats are talking about reopening the deal to demand stronger labor and environmental protections.

And, unsurprisingly, Trump is once again threatening to withdraw from the pact altogether. So, more uncertainty ahead for U.S. business, workers and consumers. 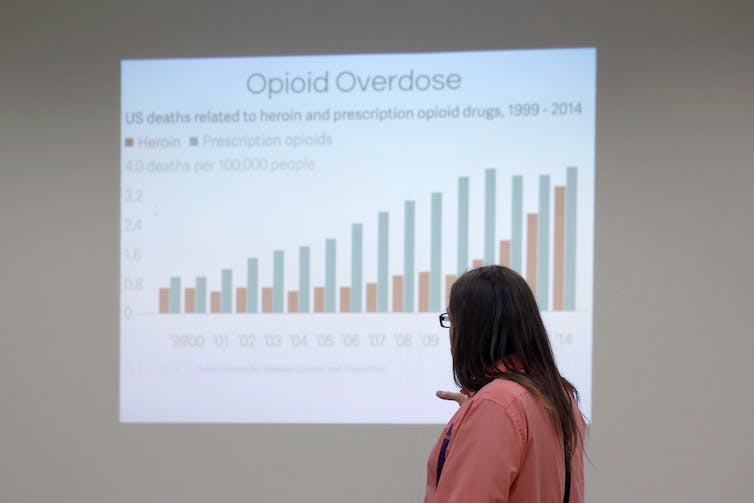 In his inaugural address, Trump vowed to end “American carnage.” If carnage is measured in American mortality, things are are not getting better, unfortunately.

U.S. life expectancy fell to 78.6 years at the end of 2017 – the latest data available. This continues a slide from 2015, the first time it has shown a sustained three-year fall in four decades, according to the Centers for Disease Control. Comparable countries like Canada,the U.K., France and Germany continue to see life expectancy climbing well above 80.

One of the big reasons is the opioid epidemic, which is estimated to have cost the economy $1 trillion from 2001 to 2017. Every state in the union is seeing epidemics of drug overdoses, suicide and alcohol related deaths despite better access to health insurance.

States that expanded access to health insurance showed slower growth of drug overdose mortality and increased access to rehabilitative treatment for addiction. The Affordable Care Act helped cut the share of uninsured Americans from 17 percent in 2013 to 10 percent in 2015, where they have remained.

Better insurance also brings access to services that have lowered death rates from congenital malformations, heart disease and cancer. Yet the ACA is not a panacea and has not prevented lethal epidemics from sweeping the nation.

This is especially frustrating because Americans spend 18 percent of GDP on health care, or $10,739 for every man, woman and child.

So the problem isn’t spending. It’s how we spend it. Research and real-world examples are showing how communities bringing together multiple groups outside of health care to pursue various approaches can lead to promising results. Examples include cutting overdose death rates in Dayton, Ohio, and Wilkes County, North Carolina.

That’s the best way to finally stem the flow of American carnage.

The Apple And Amazon Tag Team

The Apple And Amazon Tag Team