The MSCI all country world index hit a new record high on Monday because of the rally in US stocks. It’s up 0.25% from its January 2018 high. That’s a sideways correction with volatility added in late 2018. The S&P 500 is no longer stuck in a horizontal correction as it is up 9.3% since its January 2018 peak. Its impressive that this has been the best year for stocks in six years. It’s even more impressive that the one year total return of the U.S. 60/40 portfolio is the highest since 1998. Even though the long bond has rallied in 2019 as it forecasts lower nominal growth, stocks have outperformed.

The latest advanced indicators data are boosting Q4 GDP estimates which have been very weak recently. Specifically, wholesale inventories were up 0.2% monthly in October after falling 0.7%. The September report originally showed a 0.3% decline. The retail inventories report showed 0.3% growth which was up from 0.2% growth (originally showed 0.3% growth). The international trade in goods report showed the trade deficit in October fell from $70.55 billion to $66.53 billion. Exports fell 0.7% and imports fell 2.4%. You don’t want to see trade falling if you’re looking for a strong economy, but purely in terms of GDP, it’s good to see imports falling more than exports.

The next update the GDP tracking estimates will give will be higher or has been higher if it has been revised already. On Wednesday the Atlanta Fed Nowcast was revised to show 1.7% GDP growth instead of 0.4% growth. Net exports went from hurting growth by 0.39% to helping it by 0.2%. This section partially explains this update and why the other trackers will go/have gone up as well. Trade boosted the Oxford Economics Q4 GDP growth tracker by 0.2% to 1.4%.

The top chart below shows the monthly trade contribution to GDP growth compared to the Atlanta Fed’s Nowcast estimate. The October reading shows trade helping GDP growth significantly, while the Nowcast expected a negative impact (before this latest update). The rest of the quarter might not continue at this pace, which means the Nowcast might swing from being too negative, to too positive as it only reacts to data. 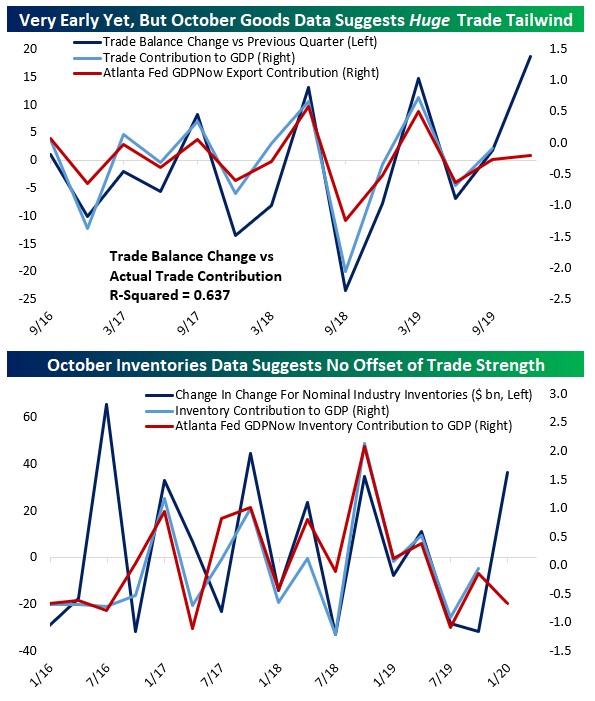 The bottom chart shows the estimated change in inventories (before the Wednesday update) versus October. This also might not continue for the rest of the quarter, but next tracking estimates should include inventory investment helping GDP growth instead of hurting it. If Q4 GDP growth ends up being solid partially because of inventory investment and trade, the bearish investors will point out the weakness in real final sales growth. These positive impacts have come at a great time in the cycle if they stay true, implying the economy could be near the trough of this slowdown.

You can see in the chart below how the 3 month moving average almost always peaks way before recessions.

The exception is the 2001 recession where the cycle peak was in November 1998, but the 3 month average peaked right before the recession. The 2001 recession was unique because the massive increase in housing from the 1990s to the 2000s was the biggest housing bubble in modern U.S. history. Housing was in the middle of its bubble in 2000-2001 which is why new home sales barely fell. The current 3 month average is at a 12 year high which implies a recession should be over a year away. Business investment will be weak in Q4, but real residential real estate investment will help GDP growth for the 2nd quarter in a row. That follows a seven quarter streak where it hurt GDP growth.

New home sales in October were 733,000 which beat estimates for 707,000 and the high end of the estimate range which was 720,000. This report would have had strong monthly growth if it wasn’t for the big September revision. October yearly sales growth was 31.6% because of weak comps; the housing market was weak in Q4 2018. That’s the highest yearly growth rate since January 2013. Strong new home sales will also boost GDP growth estimates. The key to new home sales boosting GDP growth is sales leading to new construction. Construction is what affects growth. Housing starts are important. They should be strong in the near term because permits were strong in October.

As you can see from the chart below, inventory is much healthier than it was in 2H 2018 when the housing market was weak

In December 2018, there were 7.4 months of inventory and now there are 5.3 months of inventory. Starts will be limited by pricing as the median new home price fell 3.5% yearly. Weak pricing and low rates are driving housing demand; it’s a catch 22 to have prices increase to boost starts because higher prices lower demand. More starts mean more supply which raise inventory and pressure prices.

2019 has been amazing for U.S. stocks. Last year the 60/40 portfolio lost money for the first time since 2008 and now it has the most gains since 1998. There is a bit of exuberance in the market as the 14 day RSI is above 70. The advanced data on inventories and trade will boost/have boosted Q4 GDP growth tracking estimates. They may actually rise too far because October might not be repeated for the rest of the quarter. The September and October new home sales readings were amazing. If Q4 GDP growth is weak, it won’t be because of real residential investment growth.

Running: Not So Much A Liberating Hobby As A Cult

Infographic Of The Day: Types Of Shipping Containers

Infographic Of The Day: Types Of Shipping Containers