So where does Iraq fit into this changing geopolitical environment and how will it effect the stock markets? The threat of Iraq disrupting the World’s markets is greatly exaggerated. Some say that if the Iraq’s prime minister, Nouri al Maliki government can keep Sunni militants away from its oil fields, production in Iraq may actually increase through an export deal with the Kurdistan Regional Government in the north.

The real threat, however, is if and when Iraq’s oil supply is cut off now that one of Iraq’s refineries have been shut down.

First you need to know the players: Sunni, Shia and the Kurd’s. Sunni militants, ISIS, have surged over from northern Syria to blitz major Iraqi cities in the past several weeks.

The Sunni-Shiite Divide Explained In 100 Seconds

The battle between Islam’s two major branches began over 1400 years ago when the Islamic prophet Mohammad died and the two sides clashed over who should succeed him. This centuries old ‘war’ is once again threatening Iraq’s (and indeed the Middle East – and thus the world’s) stability.

In the CNBC Market Insider this article, How the collapse of Iraq could actually save oil, If the Baghdad government can keep Sunni militants away from its oil fields, production in Iraq may actually increase-though global prices are still seen staying higher.

Any sort of disruption could be problematic writes William Watts below. 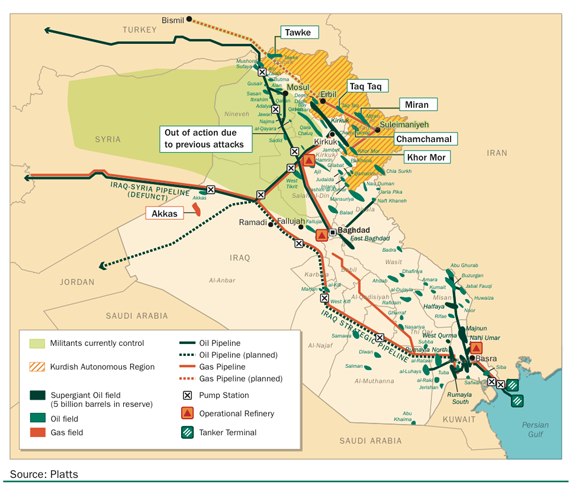 Investors seem relatively sure Iraq’s southern oil facilities will remain insulated from the country’s shocking violence. But the threat can’t be ignored, says one analyst.

A rise in oil is to be expected, but $200 is not very likely to happen even under the worst scenarios, but Chris Martenson thinks so.

The sad fact is that out of 12 OPEC members, eight of them are collectively in decline. When summed together Algeria, Angola, Ecuador, Iran, Libya, Nigeria, Qatar and Venezuela were producing just over 14.5 million barrels per day in early 2005; but are now producing just 11.25 mbd.

These countries are losing nearly 500 thousand barrels per day of production per year.

Of the other four OPEC members not in decline, only Iraq has managed to add significant production. It increased its output from 1.75 mbd in 2005 to 3.25 mbd currently.

This means that Saudi Arabia will have to account for 100% of the hoped-for additional oil supply that the IEA is calling for. There’s quite a bit of uncertainty among oil analysts as to whether Saudi Arabia can even do this, as that’s over 1 million barrels per day more than the country has ever pumped in its entire history.

If conflict causes this flow to become restricted, then $200 per barrel would seem positively cheap. While this risk is small, it is a catastrophic potential outcome that cannot be dismissed.