The Markets appear to being to doing better and the bears are making all sorts of noise, but to no avail. So where is this market correction everyone is talking about?

The NASDAQ finally finished the week closing at the top of the trading channel it has been for a month, but the question still is, ‘When are we doing to see a correction’?

Historically, accordingly to Eric Parnell, “major bull markets have almost never reached their final peak in a sideways grinding pattern. Instead, they have almost always peaked with flourish including one final crescendo toward a new all-time high before finally rolling over and succumbing to the forces of the new bear market”. (READ MORE >>)

According to the STTG Market Recap the market actually looks good from a technical standpoint.

The NASDAQ capped off a strong week of out performance as we finally saw some rotation back into high growth / momentum type of stocks. Today the S&P 500 gained 0.42% but the NASDAQ jumped 0.76%; this continued a trend we saw much of the week.

Weeks just ahead of a holiday are generally very light in volume and tend to drift upward in the absence of news so that was par for the course this week. There was some decent housing data:

Sales of new U.S. single-family homes rose more than expected in April and the stock of houses on the market hit a 3-1/2 year-high. The Commerce Department said sales increased 6.4 percent to a seasonally adjusted annual rate of 433,000 units, ending two straight months of declines.

Yesterday we said the NASDAQ made a potentially important move as it broke a 2 month downtrend, but still needed to make a new higher high. Well today we saw the index rip right up to that level it needed.

It has had a strong move this week so some digestion is probably needed but this is definitely an important spot as we could have a big change in tone here. Also it would be a positive to see the 50 day moving average slope turn from downward back up (as it remained in the S&P 500 during the entire correction).

But, investors, some at least, are not so sure the markets are in all great shape.

Investors pull money out of equity, plug it into cash and bonds 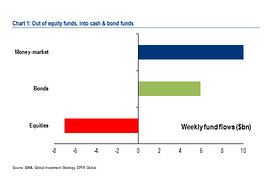 Investors pulled money out of equity funds last week, plugging it into bonds and cash as Treasury yields tumbled.

This piece is good reading and brings to light some important market aspects that might be good to know.

This is what the start of a bear market looks like. The S&P 500 struggled to a new high only two days ago on low volume amid an abundance of non -confirmations.

Investor sentiment is still high while the number of new daily highs is lower on each successive rally. New highs reached 536 last May, 428 in October, 362 in December and only 165 this month.

A year ago 90% of S&P 500 stocks were above their 200 day average, compared to only 72% recently. Margin debt is at record levels, both on an absolute basis and relative to GDP.

Small stocks are under pressure with the Russell 2000 down 10% this morning only two days after the S&P 500 peak. [More]

Long article, but many hope look towards a correction for some different reasons. Long overdue on narrow trading ranges, low volume and serious complacency. However, trying to predict the future sentiment of our emotionally unstable friend, Mr. Market, is a fool’s errand.

Why anxiety has been brewing over an imminent correction.

To be sure, any genuinely adverse event will indeed trigger the much-anticipated correction, especially if it contains an element of surprise. But in the absence of such news, the market will do what it always does to the universally-believed trade – something else.

Xpresso reports: Gold futures continue to grind sideways, as the lack of investment demand and geopolitical tension have played pig pong with the market. Global investment demand from exchange traded products has fallen year over year. Total ETP holdings fell to 1,074.5 metric tons in the quarter, from 1,077.2 tons a year earlier, according to the World Gold Council.

The geopolitical risks from the Ukrainian crisis have been well noted here and elsewhere. They may continue to underpin the market, providing a layer of support for Gold prices.

Turning to the chart, we see the August Gold contract continuing to consolidate in a progressively tightening manner. This has formed a triangle/wedge pattern on the chart, which has tightened to the point where a breakout is all but imminent. The direction of the potential breakout is unknown, but may move the price of the metal in the range of $50-60.

Xpresso reports:Copper futures have been trading non-directionally for the past month, as many traders try to make sense of current economic data and formulate projections of what the future may bring. Fundamentally, it seems as though the market is well supplied, largely due to previous stockpiling in China.

This brings about questions regarding when China will restock and to what degree. Some traders have discounted anemic US and European growth, making Chinese data even more important. Technically, the picture remains just as murky as the fundamental outlook.

The tightening of the chart hints at an imminent breakout, but the direction of the breakout is what is eluding traders. Some traders may wish to consider sitting back in the wings to wait for a direction to go long or short the market. The chart can be used for guidance to set objective and stop levels once a breakout occurs.

Traders not wishing to trade Copper itself may also look for the breakout to help formulate opinions in other markets, as the price of the metal can oftentimes be seen as a better leading indicator of economic growth than government reports.

The Bite of Robotics