Janet Yellen, chair of the Federal Reserve Board, gave an important speech in Providence, Rhode Island, on Friday, May 22. The speech was widely followed by the press and pundits.

News outlets pounced on her statement that

“I think it will be appropriate at some point this year to take the initial step to raise the federal funds rate.”

Headline writers warned that the Fed was about to raise interest rates. Markets immediately reacted, sending the dollar up and stocks down on fears of higher rates.

There was only one problem with the reporting, the analysis and the market’s knee-jerk reaction. Reporters left out the biggest little word in the English language – “if.”

Those who took the time to read the actual speech instead of relying on reporters saw that Yellen’s headline quote started with the phrase, “if the economy continues to improve as I expect…”

In other words, Yellen’s prediction of a rate increase is conditional on her forecasting ability. The truth is that no major institution has a worse forecasting record than the Federal Reserve.

Yellen was candid about her abysmal forecasting record. Elsewhere in her speech, she said:

“I can assure you that any specific projection I write down will turn out to be wrong.”

So we can give the Fed chair credit for honesty about her forecasting, even if reporters were cherry-picking her speech to give investors the wrong impression.

Yellen expects the data on growth, inflation and job creation to strengthen, which is why she sounded her warning. But a look at actual data shows that GDP growth will be close to zero for the first half of 2015, job creation has slowed significantly since last November, real wages are flat and inflation has been below the Fed’s target for three years.

Growth in China is slowing dramatically, and what little growth Europe has shown has come entirely from the currency wars, including negative interest rates, quantitative easing and a cheap euro.

There is nothing on the horizon to change any of this. U.S. growth may struggle back to the same 2% level is has displayed since 2009, and some job growth will continue. But these developments are nowhere near what Yellen said she needs to see before raising rates. In short, expect more of the same weak growth and zero rate policy we’ve seen for the last seven years.

If Yellen’s warning and the market reaction were false alarms, what can investors expect for interest rates in the months ahead? And what are the implications of that rate forecast for various asset classes, especially gold?

As readers of Currency Wars Alert know, we use the IMPACT system based on inverse probability informed by “indications and warnings” to estimate market developments. You can think of this as reading road signs to figure out where you’re heading, even though the destination is not in sight.

The road signs can validate your path or alert you if you’re heading in the wrong direction. The important thing is to have a mental map of the area and pay attention to the signs.

The stated purpose of each QE program is to lower interest rates, especially on intermediate-term securities. The idea is to make the yield so low that investors channel funds into other asset classes, such as stocks and real estate.

The higher prices on stocks and real estate are supposed to create a “wealth effect” that causes people to spend more. More spending will then result in higher money velocity and higher nominal GDP. Everything about this theory is flawed, but the Fed believes it, so we need to pay attention if we want to understand Fed policy.

The chart below shows the path of interest rates on 10-year Treasury notes over the past seven years. The shaded areas are the periods of quantitative easing. The red arrows show what happened to 10-year note yields during the QE periods.

Incredibly, note yields did not decline during QE. They rose all three times!There was some volatility along the way, and there were short periods when rates did decline, but the overall impact of QE was to increase rates, not decrease them. 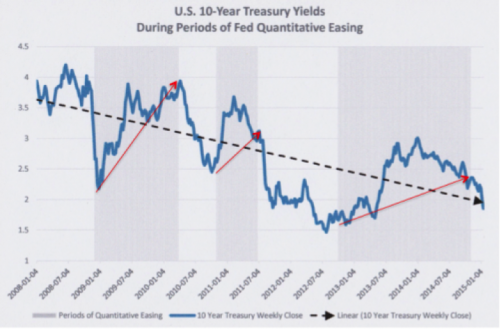 The shaded areas in this chart are periods of quantitative easing, or “QE,” by the Fed. The red arrows show that interest rates on 10-year Treasury notes actually rose during periods of Fed easing.

Equally important for present purposes is that rates declined when the Fed was not doing QE. This is also apparent from a glance at the chart.

Why do rates rise when the Fed is easing and fall when the Fed is not easing? The answer has to do with investor expectations. The Fed may believe the economy is getting stronger, but investors and everyday Americans know better – the fundamentals are weak and getting weaker.

For decades, the mantra on Wall Street has been “Don’t fight the Fed.” That was good advice in the past. But manipulation has gone on for so long and the Fed models are so muddled that a new mantra might be in order – Fade the Fed.

When the Fed is talking strong growth and rate hikes, it’s a good idea to expect the opposite.

The Fed ended QE3 last November. Not surprisingly, job growth and GDP growth rolled over around the same time, and the data have been getting weaker ever since. Interest rates have trended downward since then, despite a recent backup.

The “May Massacre” in bond prices should be seen as a technical cascade triggered by a Bill Gross blog, which resulted in position squaring by hedge funds with leveraged long Treasury positions in an overcrowded trade. The stop loss algos kicked in, and the cascade fed on itself.

Nothing fundamentally changed in May. The secular downtrend in rates, which has persisted since 1981 and accelerated since 2007, is still intact. The end of QE3, combined with tough talk from the Fed, will weaken the economy further and result in lower inflation expectations and reduced yields in the months ahead.

It is difficult to see how the Fed can raise rates in 2015 without sinking markets and the economy completely; therefore, a rate increase should not be expected. The only things that will change this outlook are if the Fed blinks and admits it cannot raise rates or if it starts to talk about QE4. We’ll be watching closely for indications and warnings on both of those events.

How can investors benefit from the huge gap between what the Fed expects and what markets expect? This is a good time to take another look at gold, especially high-quality gold mining stocks.

Gold has two ways to win. If low rates persist, gold becomes more attractive because costs of carry and opportunity costs of holding an asset without yield decline. Conversely, if rates go up, that means inflation is on the way, and the gold price benefits from that also.

Gold mining stocks have been beaten down to the point where stock prices will either go up or the miner will go out of business. That’s why it’s important to stick to the high-quality names in the major indexes.