Light At The End Of The Tunnel For African Miners

Last week I attended the Investing in African Mining Indaba in Cape Town, South Africa, as both a presenter and a student seeking opportunities. One of the highlights of the conference was former Prime Minister Tony Blair’s keynote address, during which he offered some crucial advice to African governments: To attract and foster a robust mining sector, a commitment to fiscal stability must be made. 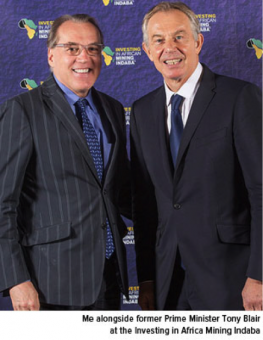 Since 2009, Blair has run the Africa Governance Initiative, which counsels leaders in countries such as Rwanda, Sierra Leone, Liberia, Guinea and others.

Simply put, without fiscal stability and predictability in taxation, capital will be unwilling to flow into any country-African or otherwise-for exploration and production. If a government changes its tax policy every three years or so, that instability discourages the inflow of financing. This is bad for Africa.

“The mining sector remains absolutely vital for Africa’s future, and even with the sharp declines in [commodity] prices, there are tremendous opportunities and there will be, no doubt, an adjustment and reshaping of the face of mining within Africa over these next few years.”

I shared the following map last week, but it’s worth showing again, as it supports Blair’s point. Central and Southern Africa, especially, are extremely commodity-rich and maintain a large global share of important metals and minerals such as platinum, diamonds and gold. 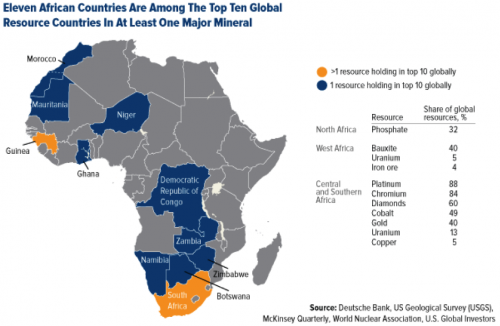 Fiscal instability is also bad for investors in Africa. If foreign investment is not respected by a government, if it is punitively taxed or arbitrarily confiscated, further investment will not flow into that country. Politically, African nations need to recognize that seemingly faceless investment institutions represent real people’s hard earned dollars.

In Zambia, for example, a huge 12 percent of the country’s GDP comes from mining, an industry that employs 10 percent of all Zambians. Yet its government has increased, rather than cut or at least eased, restrictive royalty taxes on mines. In the case of open pit mines, royalties were raised from 6 percent to a crippling 20 percent.

“Mining companies are not going to put another dollar in [Zambia]” if the government continues to be unreliable.

This is proof positive of what I frequently say: Government policy is a precursor to change. In the example above, the tax policy is leading to change that could very well hurt Zambia’s economy. With mining being such a strong contributor to its GDP, it seems the government would want to make it easier, not more challenging and costly, for international producers to conduct business there.

The less friction and fewer disruptions there are, the easier it is for money to flow.

But Zambia’s isn’t the only African government that’s placing roadblocks in front of miners. The Democratic Republic of Congo is in the early stages of hiking royalties on mines and revising its mining code. And in his recent State of the Nation Address, South African President Jacob Zuma announced that foreigners could no longer own land in the country, which raises the question of what implications, if any, this might have on U.S. and Canadian companies that own and operate South African mines. Zuma’s announcement comes at a time when persistent electricity shortages have stymied mining activity and rumblings of a miners’ strike similar to the one last year that brought platinum and palladium production to a five-month halt are intensifying.

At the same time, many governments in Africa are waking up to see that they’re going to have to provide the sort of stability and consistency Prime Minister Blair outlined if they hope to attract the capital necessary to fund and develop their mining opportunities.

A strong mining sector doesn’t just benefit the native country, either. It’s a global good that benefits all. In another presentation at the African Mining Indaba, Terry Heymann of the World Gold Council convincingly showed that the economic output of the global gold mining sector far exceeds the collective aid budget of world governments. Gold mining, he said, created and moved as much as $47.3 billion to suppliers, businesses and communities in 2013, compared to governments’ $37.4 billion.

Many gold mining companies take a more direct approach to helping the communities in the countries they operate in, including Randgold Resources, which works primarily in Mali. In an interview during the African Mining Indaba, CEO Mark Bristow detailed his company’s involvement in the fight against Ebola and other epidemics that have hit the West African country:

“Our doctors, the Randgold doctors, run a technical committee meeting every day where we coordinate with the [Malian] health authorities, and we help manage the deployment of energy. Now that we’ve eradicated the second [Ebola] outbreak, our big focus is on prevention and education.” 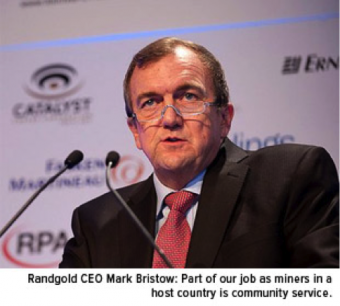 Bristow explained that the company had sponsored the development of an educational film about Ebola, before highlighting other company achievements:

“We were part of the Neglected Tropical Disease Initiative rollout… We’re very big on the AIDS programs around the country. We brought the malaria incident rate around our mines down by more than four times.”

Because Randgold is the largest employer in Mali, Bristow suggested, he feels a moral obligation to partner with his host country and make it a healthier, safer place to live and work.

During the same interview, he insisted that Randgold, which we hold in our Gold and Precious Metals Fund (USERX) and World Precious Minerals Fund (UNWPX), has a “solid five years ahead of us,” citing the fact that the company holds no debt and managed to replace all the ounces it mined in 2014 at $1,000 long-term gold price. It also increased its dividend 20 percent.

This is in line with gold mining stocks in both the NYSE Arca Gold Miners Index and FTSE Gold Mines Index, which are outperforming the return on bullion.

As I mentioned back in July, when mining stocks do well, bullion has tended to follow suit. This also shows that producers are successfully adjusting to a $1,200-per-ounce environment by scaling back on capital spending, selling off assets, putting exploration on hold and engaging in mergers and acquisitions-which in the past has signaled that a bottom in spot prices might be reached. B2Gold Corp. closed on its deal to buy Papillon Resources in October; we learned in November that Osisko Gold Royalties is taking over Virginia Mines; and last month it was announced that Goldcorp would be purchasing Probe Mines.

Debt Be Not Proud

Xinyuan Real Estate: What the 4th Quarter Report Tells Us

Xinyuan Real Estate: What the 4th Quarter Report Tells Us