One More Major Sell Off Coming In Gold

Our framework of expectations for Gold has not changed, and this week’s report will contain a number of charts that confirm the analysis that is already in place. Even though the expectations will seem familiar, members should use the report to deepen their understanding of Gold’s likely current path. Be forewarned, however, that the analysis is somewhat repetitive. To an analyst, that’s encouraging – the more stability we find in a Cycle framework, the higher the probability that we’re on the right track…and that the current cycle will conclude as expected.

As readers know, I’m a long term (secular) Gold bull who has been short term (cyclical) bearish for some time. And although I’m not quite ready to declare a change in trend back to the bullish side, the bull in me is beginning to get excited again. As the Gold sector continues to lose broad investor appeal and interest, and as volume and volatility continue to decline, I’m becoming cautiously optimistic that we may be on the cusp of a surprising and impressive upside move.

Even so, we need to remain patient…and diligent. As is often the challenge in trading and investing, timing is the key. Although there is evidence to support both short term and long term changes in Gold’s trend, the reality is that it’s still a little early. A move higher from Gold’s current position would be early for a trend change, especially with Gold not having shown quite enough evidence that the turn up we’ve been waiting for is here.

There is evidence that gold is turning bullish – and even that Gold formed both a DCL and ICL this week. Because Gold was technically oversold and deep in the daily count (27 days), the Swing Low this past week was most likely confirmation that a new Daily Cycle has started.

But did the Investor Cycle also form a Cycle Low? The answer is…maybe. And that’s not an answer designed to simply cover all the bases. It’s the right answer based on the evidence – in a bear market, a bottom can’t be called simply because an asset formed a DCL. A bottom call typically rests on one or more of three pieces of evidence. The first, upside confirmation, can take weeks to unfold. The others – a deep low in terms of time, or a decline that is extreme and which ends in capitulation selling – didn’t happen. Since we had none of the three during the past week, an ICL, though technically possible, is far from probable based on how major turns generally form. 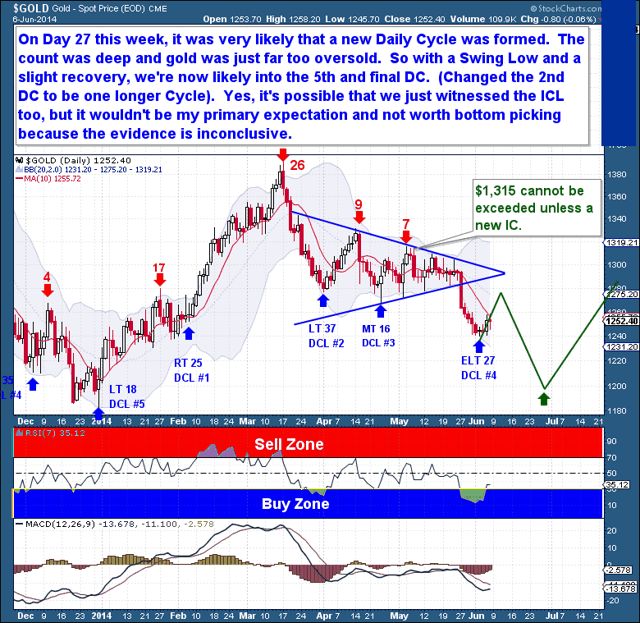 Looking at the precious metal Miners, we note that they led Gold out of the current DCL by moving higher 3 days earlier than Gold. This is not unusual – Miners often lead Gold. Their move during the last 7 sessions, however, has led me to believe that Gold has one more leg lower during the current IC.

Why Does the Eurozone Need a Negative Interest Rate?