Once again, the market’s caught completely off-guard by a vicious oil bounce.

Crude is screaming higher this week. After bottoming out in August near $38, a barrel of West Texas Intermediate Crude is now just shy of $50.

A real rock-em, sock-em rebound. But this sharp move has left a lot of investors asking a serious question…

Is this oil bounce for real?

Today, we’re taking a stab at this burning question-and revealing how you stand to profit handsomely from oil’s next big move.

Oil forecasts are all over the map these days. You’ve got the legendary T. Boone Pickens who thinks oil’s going to $70 before the end of the year. Then you’ve got the infamous vampire squids at Goldman Sachs telling everyone to get ready for an oil bear that’ll last for 15 years-and send crude down as low as $20 per barrel.

I know I’m not going too far out on a limb here, but the truth probably lies somewhere in between.

To be honest, I’m not a fan of the oil price guessing game. After all, if you want to make money in the markets you have to react, not guess. But right now we’re seeing plenty of evidence that’s giving me enough ammo to toss an end-of-year prediction your way.

Like I said, I’m not getting into long-term forecasts here. We’re just looking out a few months into the future. But that’s enough to hand us some sweet, West Texas gains…

So let’s go to the charts for some clues. First up is crude: 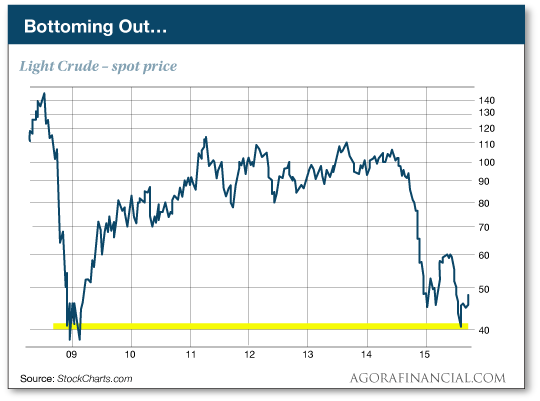 This is a long-term view going back to the 2008 crash. And what do we have here? Looks to me like crude is bottoming out right near its 2009 lows…

But what about energy stocks? Investors have been selling energy names with both hands since last summer-only taking a brief break earlier this year before inflicting more carnage.

Take a look for yourself: 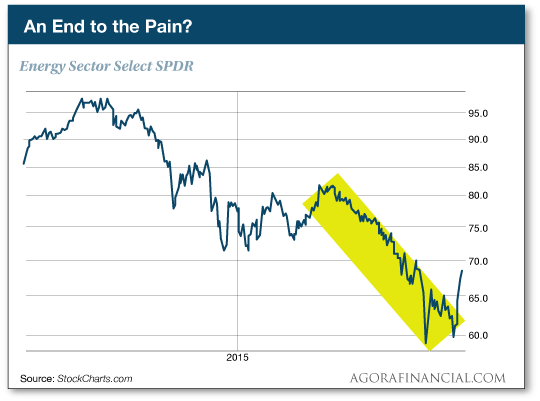 Now, it appears that the May through August swoon was the final move lower. Note the higher lows posted just last week before the big thrust higher out of the downtrend.

Both these charts point to a continued rebound-at least in the short-term. And the short-term is enough for a profitable trade, as far as we’re concerned.

So let’s pair these findings with some other data. I asked Matt Insley from our resource desk to help scare up our end-of-year price target…

“The way I see it there’s a gigantic ceiling over the price of oil right now. Barring a Middle East meltdown or Oil War, the current oil supply and demand situation tells me that prices likely won’t go – or stay – above $60-$65 for quite some time.”

Matt says “marginal producers” will begin churning out production when oil creeps toward $60 because they can make a profit at that price. But all that extra supply will flood the market, which will drive prices back down again. So once we begin to see prices creep toward his $60-$65, the selling pressure could begin.

Combining Matt’s data and our charts, I’m comfortable with a $60 end-of-year target for crude. That leaves plenty of upside for oil and energy stocks over the next few months.