While oil prices this year have traded at lower levels than I expected, natural gas prices have been mostly in line with my expectations. Following the unseasonably cold winter of 2013-14 that depleted natural gas inventories, a mild summer and normal winter – along with record natural gas production in the U.S. – allowed gas inventories to return to normal. There have been no major surprises since that have moved the natural gas market in either direction, so prices have remained depressed this year as I expected.

The longer term picture for natural gas producers is still bullish. The EPA is aggressively phasing out coal, and natural gas still looks to be the biggest beneficiary. The first liquefied natural gas (LNG) export terminal in continental U.S. is set to open within the next six months, with more to follow.

Chemical manufacturers are also taking advantage of low U.S. gas prices. According to the American Chemistry Council (ACC), as of July 238 new chemical manufacturing projects were planned in direct response to low U.S. gas prices. These projects represent $145 billion in capital investment, mostly by foreign companies, and will eventually consume a significant share of the U.S. gas supply. In fact, the ACC also reports that nearly 40% of these projects have been completed or are under construction, and that is beginning to show up in the industrial natural gas demand numbers which have risen every year since 2009: 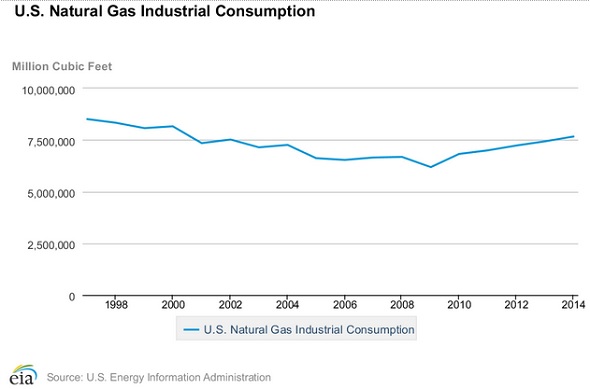 On the demand side, the U.S. Energy Information Administration recently reported that natural gas production across all major shale regions is projected to decrease this month for the first time ever. Thus, a future with higher demand and potentially lower supply is a pretty good bet, and that should drive natural gas prices higher over the next few years.

In this week’s Energy Strategist I am going review the key metrics for many of the biggest natural gas producers, and examine their outlook in light of current and projected gas prices. Here are some highlights.

ExxonMobil (NYSE: XOM) is the world’s leading publicly traded natural gas producer. Here are the top 10 in terms of gas production during Q2 2015 in descending order, along with some key metrics:

If we remove the integrated companies and just focus on the top 10 pure oil and gas producers with the greatest revenues from natural gas, the list looks like this:

However, most of these companies still derive the majority of their revenue from oil production. So if we want to look at the top 10 “purest play” natural gas companies, the list looks quite a bit different. Here, I limited the rankings to companies that obtain more revenues from natural gas sales than from oil sales. Here were the top 10 sorted in descending order by enterprise value:

(Cabot’s EBITDA and related metrics show the effect of a $771 million non-cash impairment charge taken in December to account for the diminished value of non-core oil fields in east Texas. Adding back that sum would yield metrics much more in line with the competition.)

This table comprises the E&Ps that are the largest predominantly gas companies in North America. Besides CONSOL, which is a gas/coal company, these companies are oil and gas companies – with the emphasis on gas. These companies will be the focus of this week’s Energy Strategist.

Gold Stocks Break Out of Slump – and This Rally Looks Stronger