As a result of the oil price crash, a number of oil and gas companies are in financial trouble. The media has reported on these troubled companies several times this year. Last week Bloomberg reported that one-sixth of major independent oil and gas producers have debt payments that amount to more than 20% of revenue. 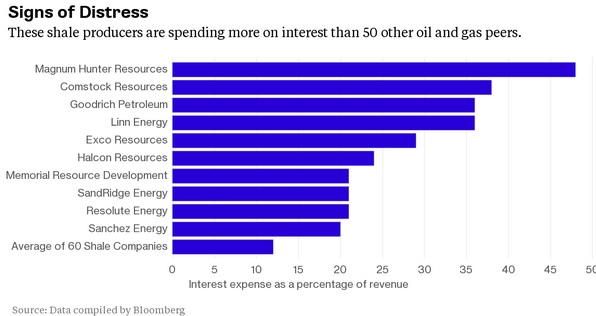 I thought it might be interesting to take a look at the oil and gas producers that are on the other end of that scale. So I screened for companies that are spending the lowest percentage of revenue on servicing their debt. I limited this screen to companies with an enterprise value (EV) of at least $1 billion. Here are the 10 that have paid the least interest expense as a percentage of revenue for the first half of 2015, along with some other important financial metrics:

While there are many names that you might expect to see on the list such as EOG Resources (NYSE: EOG), ConocoPhillips (NYSE: COP), Devon Energy (NYSE: DVN) and Apache (NYSE: APA), there have been quite a few news stories this year highlighting Chesapeake’s high debt level. How then did it manage to only pay interest in the first half of 2015 equal to 2.3% of its revenue? Is Chesapeake’s debt less than advertised?

This highlights why you have to be careful with these screens. If you look at Chesapeake’s absolute level of debt and its net debt/EBITDA ratio, you can see that it has more relative debt than most of the other companies listed. Its current ratio is also less than 1, indicating that liabilities currently exceed assets.

This screen simply indicates that, for whatever reason, Chesapeake didn’t pay much interest on that debt in the first half of the year. Likewise, just because a company appears on a list for the highest proportion of interest paid doesn’t necessarily mean it’s in dire financial straits. You have to cross-check against other debt metrics.

In this case, most of the companies in the Bloomberg table above do have other high debt-related metrics. Magnum Hunter Resources (NYSE: MHR), for instance, has a current ratio of only 0.3. Further, the 10 companies paying the highest interest relative to revenue have an average debt/EBITDA ratio of 3.5 – versus only 1.3 for those ranking among the 10 lowest.

This is a reminder to do your due diligence. Don’t short a stock advertised as financially distressed on the basis of one metric, and don’t buy one that looks strong based on one, either. Evaluate companies using a variety of information and multiple financial ratios, and cross-check those financial metrics against peer companies.

Irrigation Myths – What Seems Obvious Is Not