Investors in oil and gas companies have one more unpleasant surprise awaiting them at the end of the year.

Each year in their annual reports, companies report on their future cash flows, net of costs, based on their proved reserves. This is referred to as the Standardized Measure (SM), which must be calculated according to specific guidelines set by the U.S. Securities and Exchange Commission (SEC).

The SM is the present value of the future cash flows from proved oil, natural gas liquids (NGLs), and natural gas reserves, minus development costs, income taxes and existing exploration costs, discounted by 10%. All oil and gas firms that trade on a U.S. exchange must provide the Standardized Measure in their filings with the SEC.

I say “in theory,” because there are some very important caveats that apply.

It is important to understand that the SM is based on year-end proved reserves. So let’s review the difference between a proved reserve and a resource.

An oil resource describes the total amount of oil in place, most of which typically can’t be technically or economically recovered.

Oil and gas resources that became proved reserves as prices rose will no longer be considered as such should lower prices make them uneconomic to produce.

This is often the reason that companies have to write down proved reserves, though there are also times when it happens because a company believed there was oil or gas and found out later that there wasn’t.

PD means the resource can be produced with existing or minimal investment, while PUD may be booked as “proved reserves” if the development plan for those reserves provides for drilling within five years of being booked. If circumstances change and a company becomes unable to justify the five-year development, then it may be required to reduce its reserves estimate.

The prices used for oil, gas, and NGLs in the SM calculation are derived from the 12-month period prior to the ending date of the period covered by the annual report, determined as an unweighted arithmetic average of the first-day-of-the-month price for each month within such period for the specific commodity. Therein lies the reason for the impending reserves write-downs.

Using the proprietary screener that we have developed specifically for use with energy companies, I can extract the prices used for oil and gas company SM calculations for year-end 2014 (as well as the realized price for the most recent fiscal quarter).

Let’s look at EOG Resources Inc. (NYSE: EOG). EOG is widely recognized as one of the best shale oil operators in the country. They have increased their proved reserves dramatically over the past six years, but that is partially a function of the dramatic rise in oil prices over that same period. 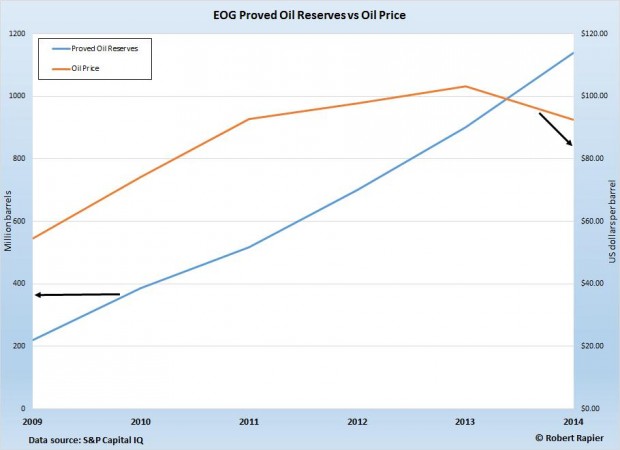 In fact, for the most recent fiscal quarter, EOG reported a realized price for crude oil of only $46.70/bbl, a decline of nearly 50% from last year’s SM price.

Our screener further tells me that at year-end 2014, EOG had proved reserves of 1.14 billion barrels, but 645 million barrels of those reserves-about 57%-were undeveloped.

The question at year-end will be

“How many of those barrels won’t be developed within five years given prevailing oil prices?”

This is where write-downs will come into play. Barrels that won’t be developed at current prices will be removed from the proved reserves category.

This might not be a big issue for EOG, as they are also one of the lowest-cost operators. Perhaps they will still manage to grow their reserves despite the challenging oil price environment.

But it will be an issue for many operators. It’s almost certain that there will be large write-downs on the annual reports of many oil and gas operators.

Gas producers will be impacted as well. While EOG is primarily an oil producer, their realized price for natural gas in the most recent fiscal quarter was $2.50 per thousand cubic feet (mcf) versus $3.90/mcf that they received in 2014.

This phenomenon will extend to countries as well.

For instance, Venezuela has an enormous heavy oil resource in its Orinoco region. But this oil is very expensive to extract.

But most of those barrels aren’t economic to produce when oil trades at $50/bbl. So if oil prices continue to be depressed, Venezuela will be forced to slash its estimate of proved reserves.

The good news is that most of this is already baked into the price of oil. That’s why so many companies are trading below their expected future cash flows-investors are anticipating that these projections will decline when year-end reports are filed.

But proved reserves that come off the books when prices fall can go back onto the books once prices start to rise again.

Phelps on What is Wrong with the West’s Economies