How China Lost an Entire Spain in 17 Days

Concerned about a tumbling equity market, PBOC moved to cut both interest rates and the reserve requirement ratio for banks over the weekend.

However, increasingly wary of a market bubble in China, investors still sent Shanghai Composite spiraling down another 3.3% on Monday after the dramatic 7.4% plunge last Friday despite the support from the central bank. 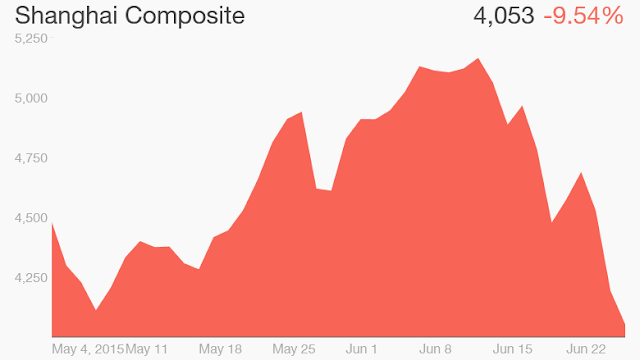 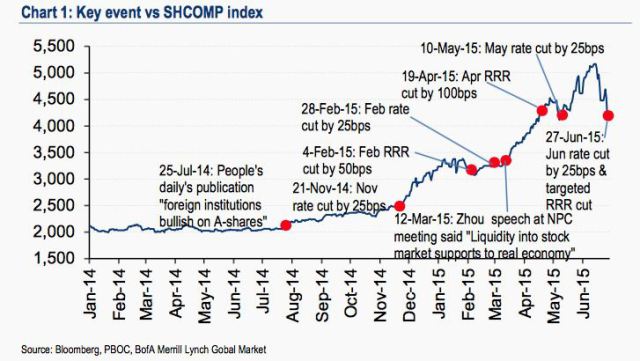 Investors are also unnerve by the latest development of Greece just days before a total default and Grexit out of EU, and the news that Puerto Rico could become another Greece of the U.S. facing a financial crisis and cannot pay back its $70 billion in municipal debt.

MarketWatch reported that VIX spiked 33% to above 18, the highest since February, implying that investors are very nervous about the chaos going around.

If you think U.S. stocks are lofty trading at an average of 16 times last year’s earnings, the average Chinese stock is now trading at 30 times earnings.

Analysts at HSBC think the China’s central bank was trying to engineer a “soft landing” for stocks. But this could be a difficult balancing act trying to shore up investors’ confidence while keeping a lid on the speculative fever among Chinese retailer investors (Remember those Chinese housewives who bought up 300 tons of gold and made Goldman Sachs swallow their gold selling recommendation?)

The Shanghai Composite has fallen 21.5% since its June 12 peak wiping out ~ $1.3 trillion in market cap. To put this in perspective, Quartz pointed out that the ~ $1.3 trillion loss in market cap, in 17 days, is close to the combined market capitalization of Spain’s four stock exchanges, and it’s not even counting losses in Shenzhen, China’s other major bourse.

Greece has been the center of financial market attention for the past few months. With a record $370 billion in margin trades, the Chinese stock market is looking even more ominous.

Only time will tell if Beijing’s able to turn the situation (i.e. slowing economy with a bubbling equity market) around. But if the world’s biggest trading nation suddenly has a crisis of some sort, it would be a catastrophe of a different scale. Size does matter when it comes to financial collapse, and China could do far worse damage than any Grexit or PIIGS debt default.