The U.S. government is finally getting serious about upgrading the country’s crucial energy and electric infrastructure.

A new first-of-its-kind report, known as the Quadrennial Energy Review, issued by a White House task force in late April, has identified the need to spend billions on replacing aging gas pipelines and modernizing the power grid.

The sheer magnitude of the spending required should boost regulated gas and electric utilities’ earnings since they’re essentially guaranteed a rate of return on such investments. And higher earnings not only lead to share-price appreciation, they also eventually flow through to the dividend.

The Edison Electric Institute, the association of investor-owned power companies, has estimated that by 2030 the U.S. electric utility industry will need to make a total infrastructure investment of between $1.5 trillion and $2 trillion, of which transmission and distribution investment is expected to account for about $900 billion.

It turns out we’ve been coasting on investments made, in some cases, nearly 60 years ago. Almost half of the country’s gas transmission and gathering pipelines were built back in the 1950s and 1960s in response to the thriving post-World War II economy.

Consequently, interstate pipeline investment is projected to range from $2.6 billion to $3.5 billion per year through 2030, depending on the overall level of natural gas demand. The total cost of replacing cast iron and bare steel pipes in gas distribution systems is estimated to be $270 billion.

But we’re not just talking about aging infrastructure. Many of the power industry’s systems are facing obsolescence.

In fact, the White House offered yet more evidence that the dramatic changes in the energy industry over the past few years, such as the increased adoption of renewables, the shale revolution, the rise of efficiency technologies, as well as security issues, demand an entirely new grid and pipeline system.

For years, utility executives have been working toward the development of a smart grid that would, as the report puts it, 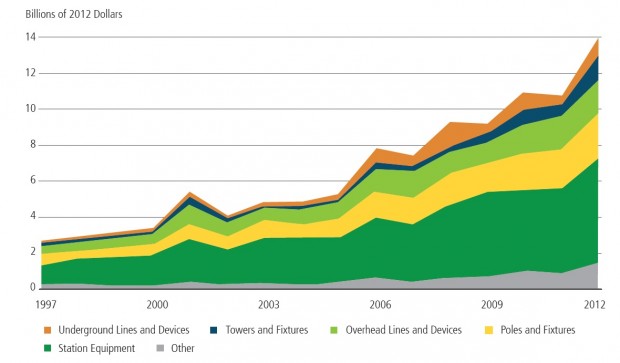 But the White House also concedes that there are other factors that could hinder the build-out, including uncertainty about state and federal incentives such as the Production Tax Credit, and perhaps most important, flat or declining electricity demand.

At the individual company level, investors must evaluate whether utilities have a constructive relationship with regulators. For instance, the infrastructure build-out in certain areas of the country has already pushed electricity prices up so high that some regulators are starting to balk at allowing certain investments into regulated rates.

According to federal statistics cited recently by The Wall Street Journal:

The newspaper found that various utilities around the country have had to raise rates by as much as 60% to pay for new infrastructure.

Fortunately, as far as regulatory relations go, we’ve already done much of the heavy lifting for you. One of the eight fundamental criteria in our longstanding Safety Rating System is whether utilities have good relations with their regulators, including demonstrated cooperation with officials in key states or federal agencies.