We’re cautiously optimistic that we’re on the verge of a major European bull market. Sure, potential headwinds don’t make this potential market as perfect as we’d like. But to paraphrase the French philosopher Voltaire, we won’t let the perfect be the enemy of the good.

Clearly, a Greek exit from the Eurozone could reverse the recovery, so too could some major geopolitical incident, such as an invasion by Russia of Ukraine. Yet these risks come with long odds.

We don’t leave anything to chance at Global Income Edge and that’s why our European investments are over-weighted toward the United Kingdom to protect the portfolio in the event that the Eurozone should suffer a reversal. Further, the strength of the British pound makes it easier for those firms to pay outsized dividends (which have 0% withholding tax for U.S. investors given tax treaties that are in place).

That being said, we strongly believe Europe still has the best prospects for growth after the United States, and given the severity of the European recession there are many undervalued firms there. As the Eurozone continues to strengthen we will rebalance the portfolio toward the Continent.

In fact, the performance of European stock markets in the last few months has been good by any standard, and some might even say great. Various indexes are now outpacing even the S&P 500 as the European Central Bank (ECB) started its one trillion Euro stimulus program earlier this month.

And the European markets have appeared to shrug off much of the drama between Greece and Germany in the last three months. The London FTSE 100, the European regional CAC 40 index and the German DAX have all hit new record highs, up 6.6%, 17.9% and 19.9%, respectively (see chart). “Don’t fight the Fed,” is a well-worn investing mantra, and a new one might be “Don’t battle the ECB.”

Meanwhile, this bull market doesn’t seem to be running entirely on stimulus money, and there are some new indications that the Eurozone’s recovery is starting to strengthen. According to the Financial Times, a closely watched poll of purchasing managers indicated on March 24 that Eurozone activity is now rising at its fastest pace since the spring of 2011.

The flash purchasing managers’ index for the Eurozone, compiled by data firm Markit, registered 54.1 this month, up from 53.3 in February and well above the crucial 50 level that marks an expansion in activity, according to the FT. 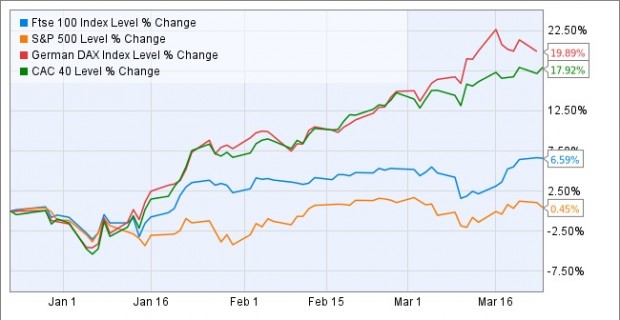 Furthermore, various trends have been accelerating the European recovery. The fall in oil prices is improving the purchasing power of consumers worldwide, and this has given Europe in particular a needed boost given that its economy has been in recession or near recession for the last few years.

In addition, the strengthening of the dollar and weakening of the euro (which is now about a fifth less against the dollar than it was the same time last year) makes European products more competitive globally and is creating a boost to corporate earnings.

For subscribers, we profile the performance of one of our top holdings that’s delivered 20% appreciation on renewed growth in Europe.

A special thanks to Walt T., Thomas C., Phil G., Ricky K., and the many others who wrote in to say “I love trivia.” We’re happy to hear that you enjoy this feature.

The answer will be provided in next week’s issue.

Last week’s question was: What large group of Pacific islands are protected by the U.S., home to 68,000 residents, and named for a British sea explorer?

The answer: The Marshall Islands. Named for Captain John Marshall, these far-flung pacific islands are small dots in the large empty ocean between New Zealand and Hawaii. The U.S. has maintained a military presence on the islands since they gained control of them from Japan in 1944.

The Marshall Islands are home to the corporate offices of one of our favorite shipping stocks –Seaspan (NYSE: SSW). We like the long-term contracts that are built into their charter model of business, which powers a consistent dividend of 7.58%.

*Due to an email problem, not everyone received the answer to the question from two weeks ago, which was: In 1847 a German immigrant to England named Bernard Morris opened a small tobacco shop on Bond Street in London. What was the name of his son?

The answer: Philip Morris. While he was only a local tobacconist with a small shop in London that sold hand-rolled cigarettes, after his death his surviving widow made his name into a brand. The popularity of the branded cigarettes grew quickly, and eventually were acquired by what would later become one of the largest and most successful tobacco companies in the world.

As a 2008 spinoff from the company Altria, the continued brand of Philip Morris International (NYSE: PM) maintains a 16% market share of cigarettes sold outside the U.S.

They manage the world-famous Marlboro brand and are realizing continued growth as they bring the brand into Asia and other emerging markets.

While health advocates are rightly opposed to the proven dangers of tobacco products, there remains a strong market for the consumers who decide to consume them anyway. A nearly 5% dividend yield and attractive growth prospects make this company a solid pick for any income investor who chooses to own shares.

Find out how high-yield dividends can power a retirement without worry, and collect steady income from a class of dividends that we call “Golden Years Paychecks.”

Living in a Free-Lunch World