Finally, things are now getting back to normal after the holidays.

Of course, the oil price “Grinch” is still with us. He outstayed his welcome weeks ago, but with the shorts still driving today’s oil prices lower, he’s decided to extend his stay.

And as the first two trading sessions this week have shown, the instability in the energy sector remains as well.

But as I’ll show you, it’s not all bad news.

For one portion of the industry, lower oil prices actually mean higher profits… 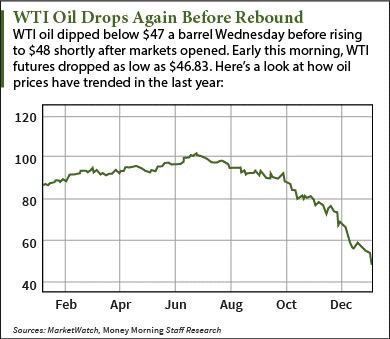 Of course, this time around, the downward pressure on oil prices is coming more from the refined product rather than from the crude oil side.

Keep in mind that all of this movement, however, has little to do with market dynamics. Instead, it is about short positions attempting to estimate the supply.

Unfortunately, that uptick has been tempered by some preliminary figures that show tomorrow’s government statistics may show an unusually large buildup in distillates and, to a lesser degree, gasoline inventories.

In other words, the depressing influence this week is in refined products, not necessarily the volume coming out of the ground. That doesn’t change the fact that the real engine for lower prices is coming from contract manipulation, not straight up supply and demand.

After all, the new volumes of U.S shale and tight oil production are hardly something recently recognized by traders. The truth is this is not a recent event. It has been building up for several years, and now pundits are using it to explain the 50%+ collapse in oil prices.

But it just doesn’t fit.

As I have noted before, the rise in domestic production from the largesse of unconventional reserves influences oil prices only indirectly.

There are two facts to remember here. First, demand in other parts of the world dictates the price of oil, not just that in North America. Second, until Congress changes the law, American crude cannot be exported.

The only factor in play here is the decline in U.S. imports. And that has been taking place for at least the last four years. From satisfying almost 70% of our domestic needs, imports will account for only about 30% of the required crude within the next 10 years.

Once again, it’s hardly a trend that has gone unnoticed.

Yet, there is one aspect of the “oil product glut” occurring this week that has created some interesting investment options.

It is also the answer to the rather obvious question: Why are refiners producing so much product given the current environment?

The answer is simple: Unlike crude oil, refined oil products are exported.

In fact, the United States is the world’s leading supplier of refined products, including everything from gasoline, diesel, low sulfur heating oil, and naphtha (a necessary constituent element in high-octane fuel).

As a result, American refiners can now hedge both the raw material (crude oil) required for the product and what is actually being produced. And in the latter case, they have a number of foreign markets to turn to.

Remember, while the price of crude oil continues to be the single biggest factor in refinery operational expenses, it is the refinery margin that determines the profit. The refinery margin is the difference between what it costs to run the plant and the price commanded at the first wholesale exchange point or the “rack” price.

Exports allow refiners (and traders) the ability to utilize wider applications of crack spreads. These spreads allow refiners to hedge crude oil prices against gasoline and heating oil. This also allows for the usage of diesel pricing, since diesel and heating oil are the same “cut” in the distillation process.

Which brings us back to the “product glut” hitting this week.

The demand levels that impact prices are occurring elsewhere, not in the United States or in Western Europe. If the supply surplus moves to the oil product end of the spectrum, however, American refiners and futures contract traders are going to benefit.

The decline in crude prices simply means the refinery margin is improving.

So long as demand remains steady in developing parts of the world – and in this case there doesn’t need to be any appreciable increase – the refineries still operating will benefit from higher foreign pricing versus what is a lower-cost product back at home.

So it seems the oil price Grinch has a plan to profit after all.

The WSJ Is Outraged That Someone Would “Loot a Company”