The Year of the Utility

Utility investors should be forgiven for popping the champagne a little early this year, as they have much to celebrate: Utilities produced a stunning 33.1% total return in 2014, outperforming all other sectors in the S&P 500, while more than doubling the broad market’s return.

This performance has once again proved that utility stocks are the ne plus ultra of equity-income investments, especially when safety and stability are in high demand. And the latter was certainly the case in 2014, with a year punctuated by various geopolitical and market uncertainties that kept investors on edge.

Though most economists viewed the Federal Reserve’s taper of its extraordinary stimulus as a positive sign for the strengthening of the economy, many investors were not so sure.

And the huge 2.1% contraction in gross domestic product (GDP) during the first quarter increased concerns that the economy was still too weak to stand on its own without the Fed’s monetary largesse, stoking fears that the economy could reverse course and fall into recession.

This was the first of several indicators that the global recovery was not as strong as some had believed. And geopolitical shocks such as Russia’s annexation of Crimea gave the world an unwelcome reminder that political tension, if not outright conflict, can easily undo economic gains and hinder global trade.

Each of these factors spurred investors to seek safety in utilities since their highly regulated structure helps insulate them from external shocks.

Then, even as U.S. GDP was on the mend, spiking 4.6% in the second quarter and a further 5% in the third quarter, global growth began to slow in parts of Europe, Asia and Latin America. And that caught many investors off guard.

In October, the market suffered a sharp selloff that was just shy of formal correction territory, though thankfully it quickly recovered. Some believed the sudden decline was a response to the official conclusion of the Fed’s stimulus, with investors anticipating a revaluation of the market as a result.

But the swift fall in share prices put the fear of God in many. And I believe the fact that the utilities sector protected and preserved value during that correction drew many new investors to the sector.

While the S&P 500 fell by nearly 10% from its all-time high during that period, the average Utility Forecaster Growth Portfolio Core Holding gained 8%. 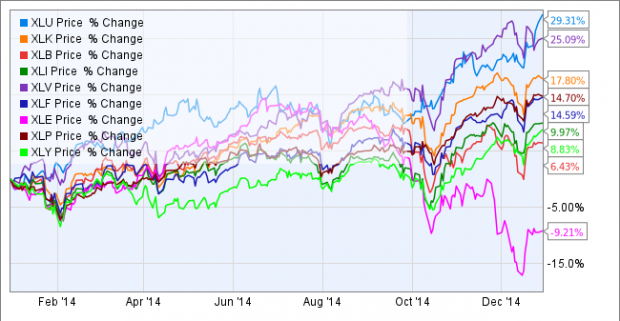 Source: YCharts
Note: Each SPDR security represents a sector or component of the S&P 500

As we noted at the time, it’s rare for stodgy utilities to beat the market in the short term during bull runs. Instead, it usually takes a full market cycle, including both bullish and bearish periods, for these stocks to outpace the broad market.

But with new uncertainty about the trajectory of the global economy, anxious investors are finding solace in our stocks’ ability to provide income while preserving value during protracted declines. And weakening global growth along with the collapse in crude oil prices have been painful reminders of how volatile markets have become.

Although oil’s steep decline has been gut-wrenching for investors with holdings in the energy sector, it should be a boon for the larger economy. Indeed, many economists believe that lower prices at the pump are tantamount to a tax cut and could spur consumer spending in other areas.

Crude’s selloff has also given the Fed confidence to start raising short-term rates again, possibly as soon as the middle of next year, assuming that low oil prices keep inflation in check. The Fed expects the benchmark rate will be 1.125% at the end of 2015 and 2.5% a year later.

Though few doubt that the U.S. economy is on firmer footing, there are questions as to whether it can sustain this pace if global growth does not recover.

Further, there are also fears that a strengthening dollar will make U.S. exports more expensive overseas, and that could cut into the profits of many U.S. companies. The strong dollar could also lead to price deflation, which could harm the recovery.

Of course, it’s clear that all these scenarios-both positive and negative-play perfectly to utilities’ unique strengths as investments. Utility stocks generally offer extraordinary downside protection, with the possibility of growth even as other sectors falter.

Thanks to their pricing power, utilities are excellent investments during deflationary periods because they hold their value while continuing to deliver income. And if the economy does take off in 2015-as we hope it does-utilities will benefit from higher earnings due to the greater energy use that typically comes with rising economic growth.

Last week, my colleague David Dittman observed that despite challenges ranging from rising capital expenditures to low load growth and competition from new market entrants, the utilities industry is well down the road toward long-term transformation.

“Opportunities for the future are starting to come into focus. Many of the moving pieces around fuel prices, renewables, customer interaction, managing distributed generation, electricity storage, demand response and energy efficiency are beginning to fall into place.”

Further, he noted that utilities are taking concrete, financially sound steps to incorporate these elements directly into their business models to seize opportunities for growth, as opposed to ceding this playing field to new competitors.

Those utilities that have taken these challenges seriously and positioned themselves accordingly will deliver value to shareholders in 2015 and beyond. And we’ll be with you every step of the way, bringing you more of tomorrow’s top utility investments.

On behalf of the Utility Forecaster team, we wish you a prosperous New Year!

We’re pleased to announce that Utility Forecaster was just named “Best Stock Newsletter” in Kiplinger’s annual “The Best List.” Fortunately, the best is still available at a reasonable price.