Will There be Support for Oil Around $55?

The futures contract for January 2015 has gone from $102 a barrel in July to $57 a barrel today, a $45 dollar a barrel discounting of price in less than six months. Much of this move is based upon bearish sentiment and future expectations for oil supplies along with bearish headlines coming out of OPEC Members and the exiting of the long side of the market (Players stepping away) and a huge short trade pushing prices lower. But the question is has too much bearish sentiment been priced in too fast? Well let’s look at some EIA Inventory Data for trying to put some actual data footholds if you will on the subject.

The US has 380 Million Barrels of Oil in storage right now, and this time last year the US had 375 Million Barrels in storage, yet the futures price was $97.65 a barrel last year at this time versus $57 and change as of Friday. That is roughly a $40 re-pricing of the commodity on a little US Inventory difference on the WTI contract. In fact just a couple of weeks ago we actually had less US oil Inventories in storage, as from week to week the year over year comparisons (noise) can move the needle in either direction (last week’s EIA Report showed a surge in Imports) this can be reversed the following week. 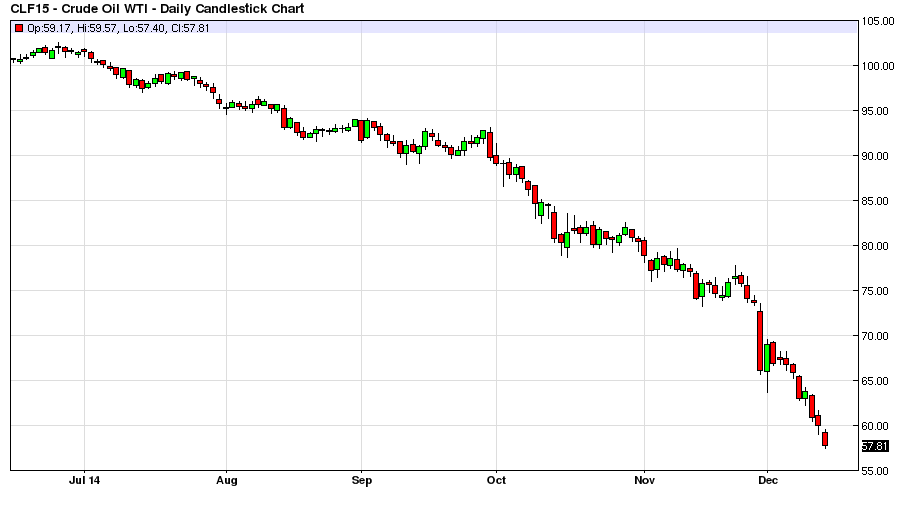 Let us dig a little deeper as this is the slow period for the oil market, after the summer driving season and before the heavy cold weather hits increasing demand for heating oil and other energy products in the heart of winter. On July 4th the US had 382 Million Barrels of Oil in storage, so actually more oil in storage at the heat of the summer driving season than we do today at the weak part of the oil market in terms of demand, but yet price has gone down $40 a barrel on essentially the same level of oil supplies here in the US.

Another interesting tidbit regarding supplies is that the US had its highest level of supplies both at Cushing Oklahoma and overall when the futures price was around $115 a barrel due to Middle East disturbances, i.e., much more worrisome supply and demand issues here at home with high prices eating into consumer demand for gasoline and a less robust economy.

Markets are Routinely Mispriced in the ZIRP Alternative Universe

I have always criticized the oil futures market as being an accurate arbiter of value, and frankly these days with Central Banks’ Influenced Markets, I have little confidence in any financial markets assigning the proper values regarding the fundamentals of price. But let’s get back to some actual data as there is more than enough of rampant speculation regarding price, value and where the oil market is ultimately headed.

If we look at gasoline stocks the US currently has roughly 216 Million Barrels in storage that compares with 219 Million Barrels in storage a year ago. The RBOB Futures price was $2.73 per gallon a year ago (depending upon the contract), and in the $1.60 range today, so over a dollar re-pricing for gasoline on basically the same level of gasoline supplies, and this is a week after an abnormally large build in weekly inventories which may have pulled forward from next week’s figures. And on July 4th the US had 214 Million Barrels in storage at the heart of the summer driving season compared with just 5 Million more in the weak part of the gasoline demand season. Yet the RBOB Futures price was $2.75 in July versus $1.60 today with what amounts to basically noise in Inventories of actual gasoline products, that’s a sharp $1.15 per gallon difference in price. 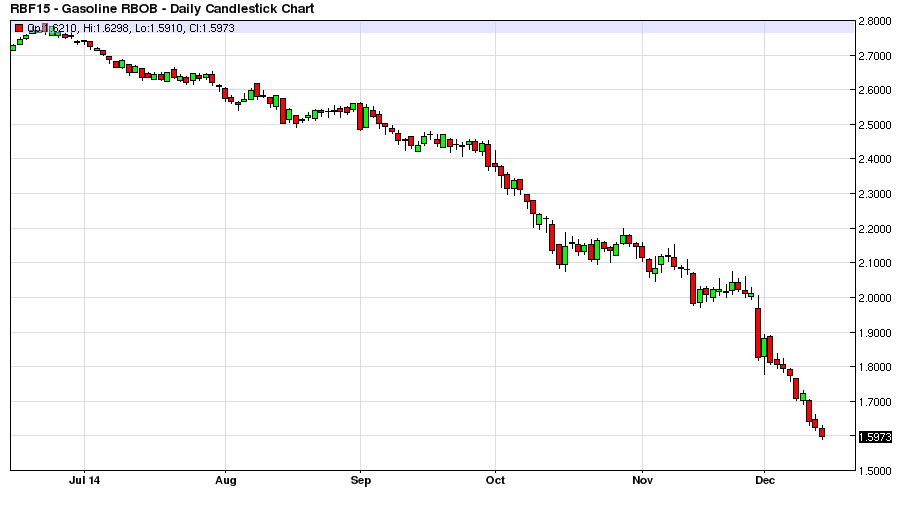 I could continue this analysis with the Distillates Market but it portrays the same picture, in fact prior to last week’s large build in Inventories, US Distillates Stocks were shockingly low for this time of year in relation to the current futures price, and well below last year’s level on the wholesale market, i.e., roughly down 8% year on year at the wholesale level from a supply perspective. Distillate Stocks are at the very bottom of the 5-Year Range, and with prices so low for Heating Oil, and the heavy part of the winter still ahead of the US and Heating Oil demand, we could experience a real squeeze in price with supplies at such low levels if we get 3 or 4 weeks of extremely cold weather. 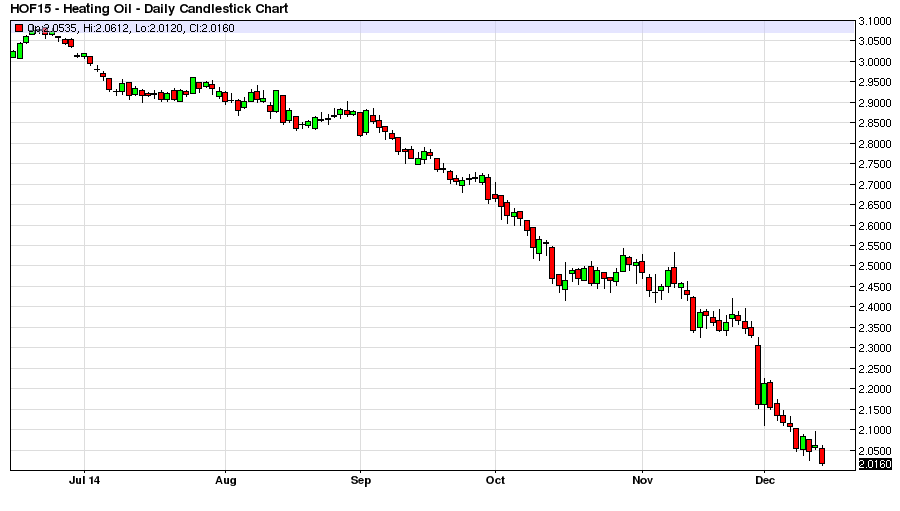 To sum up there is a lot of future bearishness already priced into the oil market, should prices have been as high as they were, probably not from certain perspectives. But what is a commodity worth, what are the costs associated with bringing it to market? The oil market has essentially prior to this latest breakdown traded in a range from $80 to $110 the last several years, and the last 7 years based upon current price is negative in value. But sure better drilling technology has brought some cost efficiency to the table, however, overall production costs have soared over this same 7 year period.

So at what price level should a barrel of oil reflect these costs associated with getting it out of the ground, not just today but six month’s from today, two years, etc.? For example, compare the oil market to healthcare or Education and it sure looks like an undervalued long-term asset and maybe the Saudi’s and OPEC should utilize the strategy of cutting production by 1.5 Million Barrels per day today, let the US Shale Industry run its course, deplete its resources, get a higher value for their current offerings to the market, and have more actual supplies for the real inflation push in the oil market similarly to Healthcare or Education from a price curve perspective during the next up-phase in the oil market.

The price of a new automobile ironically reflects the inflation curve over the last 7 years far more than the product that actually fuels it with this recent downturn in gasoline prices. Does that mean that Heating Oil and Gasoline are underpriced at current levels on the futures contracts? Let’s see how the oil market responds to several weeks of hard freezes, the Heating Oil market particularly, and what type of short squeeze occurs in Oil as a result. The amount of shorts in oil right now must be good for at least a $15 a barrel pop in price on a retracement alone during an extremely cold period lasting 4 weeks. My best guess is that there is solid support around $55 a barrel for oil, and a solid retracement is probably in the cards sometime over the next couple of months.

Orion: to Boldly Go, so Long as the Wind Blows Fair and the Weather Holds