Is China on the Verge of Devaluing the Yuan?

I have been speculating that CHINA will join the currency war AGAIN, and in an even bigger way, the currency war that JAPAN is currently leading and threatening to win in a walk unless CHINA gets serious about ‘getting competitive‘

CHINA lowered interest rates last week; and this spurred heavy buying in Chinese stocks. Why such heavy buying in Chinese stocks, when the economy is weakening? One thought is that rich Chinese are eager to unload their Yuan holdings before the Great Devaluation begins. One way to do this is to plunge ‘money’ in stocks before the devaluation. Devaluation WILL drive stocks higher. See the US during the QE Half-Decade as an example of this, and Japan after every stage of QE in their past decade of debt-monetization.

Interestingly, not all Chinese stocks are rising wildly. In fact, the Shanghai Index (SSEC) is roaring; and the Hang Seng Hong Kong Index (HSI) is not, is whimpering in a languid consolidation move. The Hang Seng is the international index, allowing foreign investors to trade in Chinese stocks; the SSEC is (or at least has been) open to only Chinese nationals for investment. In November, China did open a small window to the Shanghai market for foreign investors ($2 billion in a $3 trillion market), but this does not seem to explain the divergence. China, as an economy, faces a lot of problems; and seems to be heading into another leg of recession due to continuing debt problems and housing bubble collapse. The Chinese economy is growing at its slowest rate since 2009. So, why is Shanghai soaring?

Let’s look at a few charts. 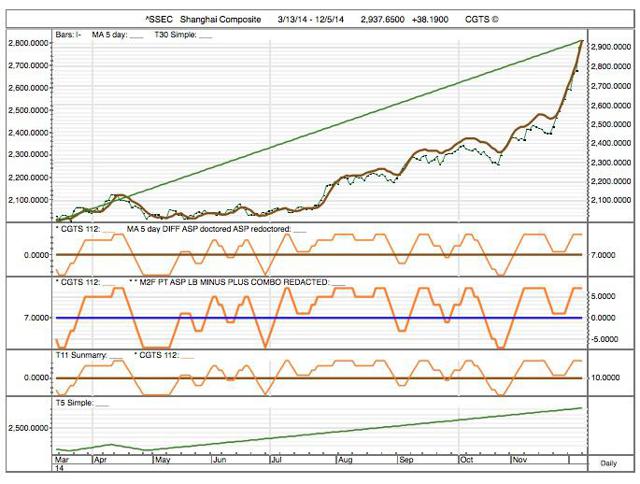 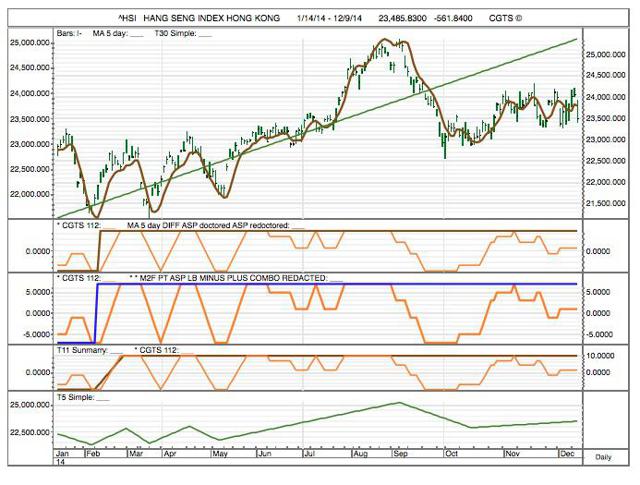 CYB is the Chinese Yuan ETF from Wisdom Tree. It has made a long run up, over many years; but it is trying to top. Is it topping? 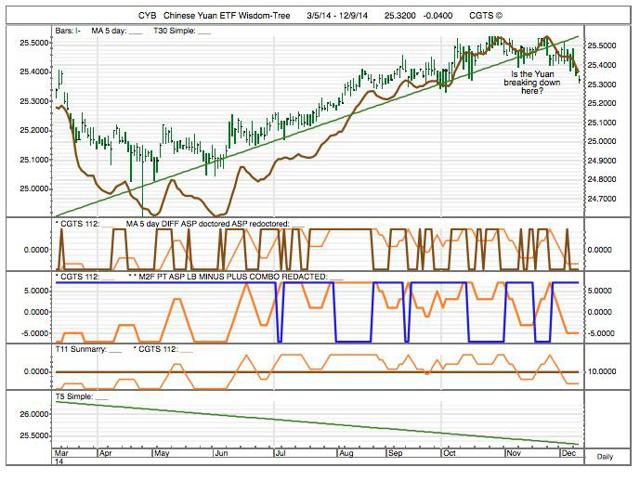 The USDCNY currency trade has been positive USD for the first half of 2014; then it pulled back from June to November. It is bottoming again, which means we should expect gains for the USD again. A stronger USDollar hurts developing currencies and economies. One wonders how the USDCNY can move at all, considering China’s YUAN peg to the Dollar. When the Dollar rises, the Yuan follows, by law. 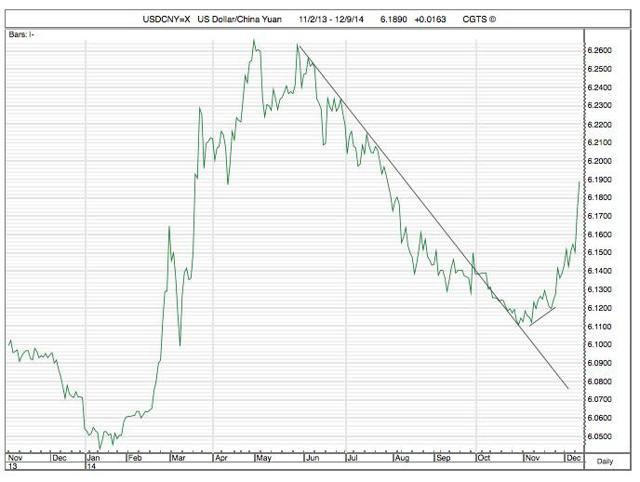 However, look at the JPNCNY chart, Japanese Yen to the Chinese Yuan. For manufacturing nations (exporters), a weak currency gives a country an edge in pricing. Japan’s edge comes from its QE destruction of the Yen. China may be becoming edgy, with Japan apparently winning the race to the bottom. 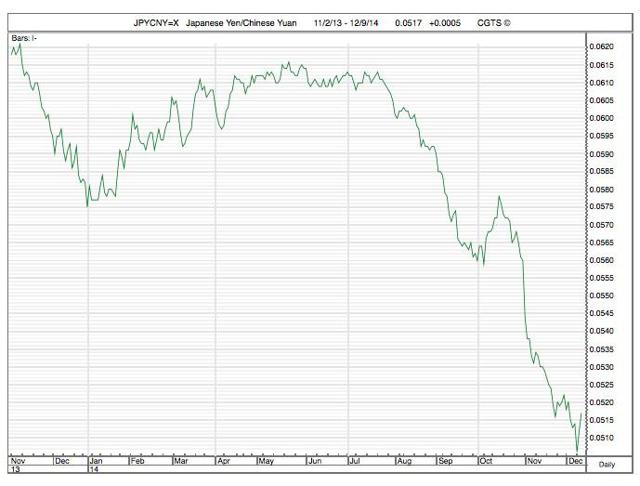 Is it a race to the bottom? If so, it is like a three-legged race: Japan is using two legs; China has one leg tied to the US Dollar, which is going the opposite direction, for the first time really since the FED decided to lay waste to the Dollar after 2009.

Is China ready to devalue?

According to Fortune Magazine and Geoffrey Smith, nearly all the panic buying in Shanghai has come on margin, is borrowed money.

This is an interesting read. However, it does not make the conclusion that the spring to stocks, and the spring out of Yuan (bank deposits are also dropping significantly) is because of a coming devaluation.

Brian Kelley wins tonight’s game ball. Brian asks in his web blog: “Is China getting ready to devalue the Yuan?“

The proximate cause of the massive run in Chinese equities is the fact that in the last month 1 million new brokerage accounts were opened in China. What do you do when you have a new toy? You use it…in this case to buy stocks.

However, there could be another reason why the wealthy Chinese are eager to exchange Yuan for Equities…yep, you guessed it…a devaluation of the Yuan.

…this is a 2015 event and will likely be the catalyst that pushes the US dollar to the so-called moon. For now the dollar likely pauses and refreshes.

FYI – this would also explain China’s insatiable appetite for gold.

In “Get Read For the Real Mess”, Vivek Kaul writes:

Among other things the depreciation of the yuan was also a response to Abenomics which had led to the depreciation of the yen against the dollar. One dollar was worth around 80 yen in November 2012, before Shinzo Abe had taken over as the Prime Minister of Japan. By January 2014, one dollar was worth 105 yen, thus making Japanese exports more competitive in the international market. China’s yuan had to be adjusted to this new reality. As China is trying to move up the value chain, its products are competing more and more with Japanese products in the international market.

This would mean Chinese exports become more competitive. As the yuan depreciates against the dollar it would allow Chinese exporters to cut prices of their products. Let’s understand this through an example. A Chinese exporters sells a product at $100. He ends up getting paid 614 yuan for it, at the current rate. But if one dollar is worth seven yuan, he would be paid 700 yuan. This situation will allow the Chinese exporter to cut the price of his product. Let’s say he cuts it to $90, even then he ends up earning 630 yuan ($90 x 7), which is more than earlier.

As Choyleva of Lombard Street Research, writes in a recent research note, “If both Japan and the euro area go for extensive QE, emerging markets in Asia would suffer as their currencies appreciate. There would be no way China could restart its sputtering growth engine without major yuan devaluation.”

In order, to stay in competition, prices of products from other countries will have to be cut. And this will end up exporting deflation (a situation where prices are falling) to large parts of the world. Of course, it is worth remembering here that everybody cannot have the cheapest currency. Once countries start devaluing their currencies, it becomes a race to the bottom and is not good for anyone. In technical terms this is referred to as beggar thy neighbour policy.

As a senior official of the Federal Reserve once remarked: “Devaluing a currency is like peeing in bed. It feels good at first, but pretty soon it becomes a real mess.”

If rich Chinese are unloading Yuan in order to buy stocks (on margin), and this is the first stage of the coming de-pegging of the Yuan to the Dollar, or some other form of devaluation, stocks should fly. 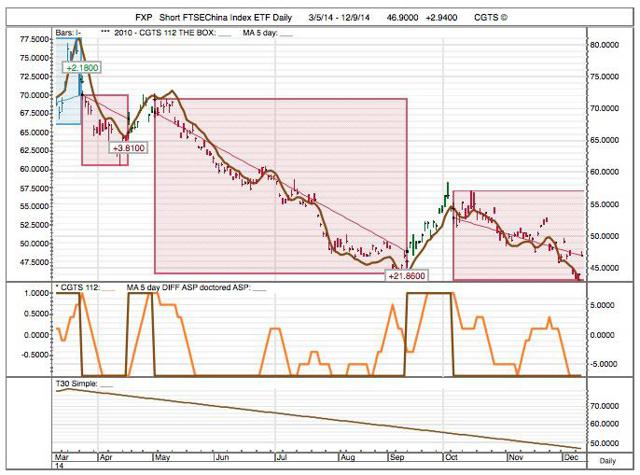 America was the first to pee in the bed, through QE and ZIRP. They were joined by Japan, the UK, Switzerland…and then the whole world was doing it. Japan has been amazing in its staying power — in its urinary capacity — and now China seems like it will be forced to de-link from the Dollar, which is ready to rally anotehr leg up against the Yuan, dragging the Yuan with it higher (the peg), a direction China cannot afford to go at this moment.

Timeline: The Tortured History of the Senate’s Torture Report