Recent News From Xinyuan Real Estate Not Good, BUT-

Xinyuan (NYSE:XIN) announced its third quarter results last week and they were not good. Following the announcement, some continue to support the company while others do not. To get a balanced and current view of the company, I read with care the earnings call transcript of its third quarter results as well as its latest SEC filing. Below, I present the bad news, some perspective, and the good news.

There were two “Bad News” stories from the third quarter:

This redemption creates two immediate problems for shareholders: XIN will have $86 million less for dividends and share buybacks.

XIN was quick to point out “TPG remains a strategic investor of Xinyuan, with 7.6% ownership of our outstanding shares and will continue to maintain its seat on our Board. But were the reasons for the redemption? XIN claims that both sides wanted it: XIN stated the redemption “…was mainly due to the restrictions of those covenants on the ability of financing for the company…. for a company at the size of Xinyuan it is critical to grow to certain level of operation so that we will be able to survive over the long term…. the restrictions, the covenants from TPGs convertible notes have put a tremendous pressure on the company in terms of financing for our growth.”

Maybe so, but I doubt this was really the driving force. I worked on real estate development in Shanghai a decade back with the large Western financial houses – Carlyle, Merrill Lynch, Lehman, CS First Boston, Goldman Sachs, Morgan Stanley, JP Morgan, Fidelity Investments and GE Capital. They all had Asia real estate branches and they all wanted to be first out of all their investments. They would rarely touch anything that did not have a 70% return. They would then say “once we have our money back and an additional 40%, we will give other investors our remaining share of the profit if you let us get out early.

My guess is that TPG was targeting on some high return deal with XIN. Once they saw it was going to take more time than they anticipated, they wanted to get out. They could immediately redeem its convertible notes with a small profit so they did. They have held off redeeming their stock because of the capital losses involved (they bought in on August 26, 2013 when XIN’s price was $5.54). Unfortunately, this all-too-likely further liquidation will overhang the market until it occurs. So much for the bad news.

Real estate development companies worldwide operate in the same way: they raise money, buy land, build, and sell. They do it over and over. Most of them ignore the reality that there are real estate cycles. Once they are good at raising money, they buy land, build and try to sell. This inevitably means overbuilding when supply has caught up with demand. And in nearly all real estate downturns, development companies go belly up. This pattern holds everywhere and means investing in real estate companies involves risk.

In China, government actions to taken nearly a year back to reduce the dangers of a real estate bubble have slowed down real estate purchases all over the country. The government now recognizes it has overdone it so during the last quarter, it took steps to increase real estate demand. I quote from the XIN transcript:

“The Chinese government has initiated some [rejuvenation] activities at the end of September and early October that will ease the mortgage and purchasing restrictions imposed earlier. The results…on the market [have] shown up pretty good…. [But]… the policies decided by Central Government have not been detailed by the local banks.”

In effect, Xinyuan is saying there has been some delay in implementing the central government policies through the banks, but this should happen in the near future.

So here we have a classic case of a real estate slowdown having a negative impact on XIN. Let’s look a little closer at the numbers.

In China, we are not seeing a country-wide real estate bubble bursting. Instead, we have just observed a cutback in real estate demand resulting from restrictive government policies that have just been eased. The demand for more building remains. Evidence for this can be seen in Table 1 where the population and GDP growth of cities where XIN is investing is presented. Population and GDP growth are the drivers of real estate demand and there is nothing in the West that is comparable to what is happening in China. 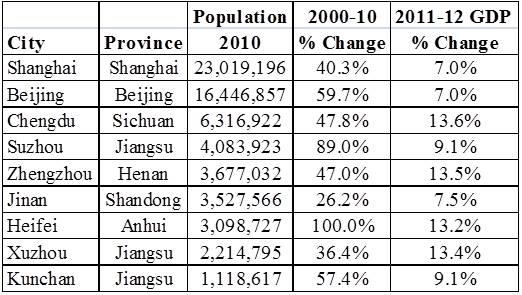 Table 2 indicates that for the company’s existing inventory of developed properties, sales of $2.2 billion have covered 68.7% project costs. Ceteris paribus, that means it will take $3.2 billion to cover all project costs. The table also gives an estimate of the total sales value of the total inventory – $4.8 billion. If these prices hold up, that would leave a profit of $1.6 billion for the company. 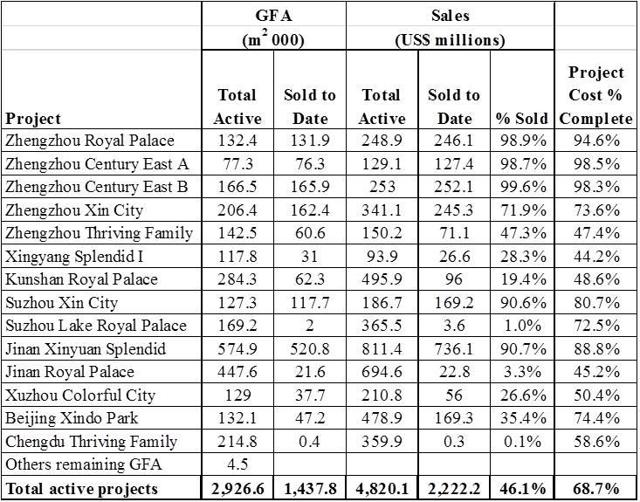 How significant would $1.6 billion be to XIN? Very. At the end of September, XIN had long term debt of $861 million. A $1.6 billion profit could wipe out that debt and leave $739 million for the company.

But will real estate prices hold up? Table 3 gives gross floor area (GFA) and average selling price per m2 (ASP) for XIN’s active properties. Government real estate restrictions started in the 2nd quarter. It is notable that for a number of XIN’s properties (shown in bold), selling prices actually increased. And the ASP for all properties increased from 8.2RMB to 10.2RMB.

At the last two open discussions of quarterly earnings, a number of financial analysts argued that the best investment the company could make would be to buy back its shares. XIN said it has an ongoing buyback program. At the last meeting it announced it bought back 630,000 shares at a cost of $2.3 million ($3.65 per share) in the third quarter of 2014. That buyback is hardly significant given that there are 89 million shares outstanding. And with the $86 million payment to TPG coming at the end of the year, there will be little “free cash” available for share repurchases.

XIN has a good real estate investment strategy. And once it gets beyond the temporary real estate slowdown in (over by the end of 2014), profits should grow rapidly. But in the interim, problems abound. In addition to insisting on the $86 million payment at the end of 2014, one wonders when TPG will start liquidating its 7.6% share of XIN common stock (6.7 million shares). The immediate future is murky and unless you are a real risk taker, this is hardly the time to buy.

For current holders of the stock, XIN is paying a 20 cent annual dividend that works out to a yield of 8.5%. When asked whether the dividend will be changed, XIN said it was a once a year decision and will not be taken up again until 2015.  So an 8.5% yield at the current price for existing stockholders versus selling the stock?  Better times are coming. Maybe not the best time to liquidate.