Selling The Shale Boom: It’s All About Reserves

If It Sounds Too Good to Be True, It probably Is

Over a year ago, Netflix CEO Reed Hasting got into trouble with the SEC when Netflix stock price spiked 21% after Hasting boasted on his Facebook page that Netflix monthly viewing exceeded 1 billion hours 3 weeks before the company’s scheduled earnings release.

At the time, we opined that

Ever since the collapse of Enron and Lehman Brothers, corporate executive behavior and communication has been under the microscope with increasing regulatory scrutiny. There’s a good reason why almost all Fortune 500 C-Suite executives are very cautious and tight-lipped when speaking to the public about anything with stock price moving potential ….. It is irresponsible for a CEO to announce something without all the facts and figures.

Well, apparently we might have been too harsh on Hasting. Bloomberg reported even more serious discrepancies rife in the U.S. shale industry (see also chart below from Bloomberg):

Sixty-two of 73 U.S. shale drillers reported one estimate [of oil and gas reserves] in mandatory filings with the Securities and Exchange Commission while citing higher potential figures to the public, according to data compiled by Bloomberg. 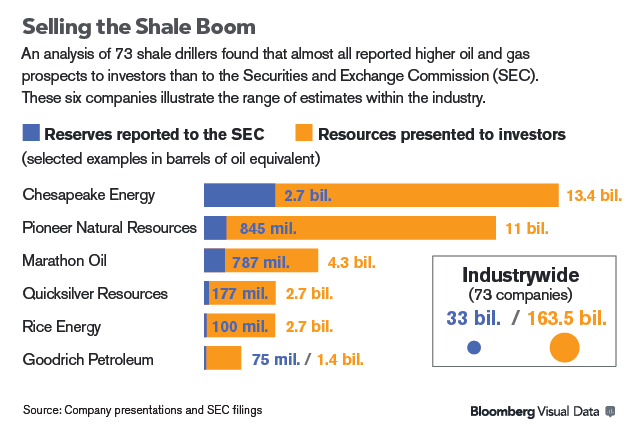 For example, Bloomberg cited Pioneer Natural Resources (NYSE:PXD) Co.’s estimate was 13 times higher, while Goodrich Petroleum Corp. (NYSE:GDP) was 19 times. Bloomberg also noted the number PXD told to potential investors has increased by 2 billion barrels a year in each of the last five years — even as the proved reserves it files with the SEC have declined. Similarly, the investor presentation by Rice Energy (RICE) shows 2.7 billion barrels. Rice, which went public in January, reported 100 million barrels to the SEC in March, that’s almost 27 times higher.

Read More >>> Solar in Oil Drilling: Beat Them or Join Them?

So in other words, these companies tell SEC one number, then can just turn around and inflate that number to whatever ‘estimates’ companies believe to be ‘probable’ and/or ‘possible’. If you think executives would be held responsible for this kind of ‘mis-communication’, you would be wrong. Apparently it is legal and a common operational procedure as Bloomberg explains:

The SEC requires drillers to provide an annual accounting of how much oil and gas their properties will produce, a measurement called proved reserves, and company executives must certify that the reports are accurate.
No such rules apply to appraisals that drillers pitch to the public, sometimes called resource potential. In public presentations, unregulated estimates included wells that would lose money, prospects that have never been drilled, acreage that won’t be tapped for decades and projects whose likelihood of success is less than 10 percent ……..
Many of the companies use their own variation of resource potential, often with little explanation of what the number includes, how long it will take to drill or how much it will cost. The average estimate of resource potential was 6.6 times higher than the proved reserves reported to the SEC, the data compiled by Bloomberg News show.

Meanwhile, Bloomberg quoted comments from two of the drillers. From the Chairman and CEO of Pioneer Natural Resources (NYSE:PXD):

“Experienced investors know the difference between the two numbers……..We’re owned 95 percent by institutions. Now the American public is going into the mutual funds, so they’re trusting what those institutions are doing in their homework.”

Here is the spokesperson of Marathon Oil (NYSE:MRO) chiming in:

Figures the company executives cite during presentations “are used in the capital allocation process, and are a standard tool the investment community understands and relies on in assessing a company’s performance and value,”

So this means Wall Street analysts model valuation, growth, and therefore stock recommendation based on ‘estimate’ that does not meet SEC reporting standards but thrown out by executives to pitch a better story of their stocks to the potential investors?

Honestly, it seems even worse than Enron’s off-Balance Sheet Financing scheme. Ultimately, in the Enron aftermath, CEO Jeff Skilling is serving 14 years of a 24-year original sentence for misleading investors. Unfortunately, that precedent does not seem to have made as much impact one would think at least within the onshore E&P industry. In that regard, we totally agree with John Lee, a Petroleum Engineering professor at University of Houston:

If I were an ambulance-chasing lawyer, I’d get into this.

This ‘over-optimism’ also opens up a whole new can of worms as to the current projection of U.S. energy reserves and production. Is the U.S. really on its way to become energy self-sufficient as some may believe based on “resource potential”? We certainly hope U.S. government checks all supporting data and facts before lifting the crude oil export ban.

According to Bloomberg, investors poured $16.3 billion in the first seven months of the year into mutual funds and exchange-traded funds focused on energy companies. Our advise to retail investors – Do your homework and double triple facts-checking, if something sounds too good to be true, it usually is.