The Fed minutes came out this past week and they mentioned the strong dollar and less than stellar growth out of Europe, basically more over the top dovishness which just encouraged more unwise risk taking in the bond markets. This week Dallas Fed’s Fisher said that they have identified areas of risk in markets, and James Bullard has said on several occasions that the markets are even behind the most dovish participants at the Federal Reserve regarding the forecasts for rate hikes, and the actual market actions of participants.

Market participants may say that the Fed will raise rates mid-year in 2015, but they are speculating in bonds far out of touch with this reality. In other words, bond speculators just like any other speculators will push price as far as they can up until the last possible moment until they literally are forced out of the market by real fear of rate hikes, and the more dovish comments out of the Fed just reinforces this risky speculation. 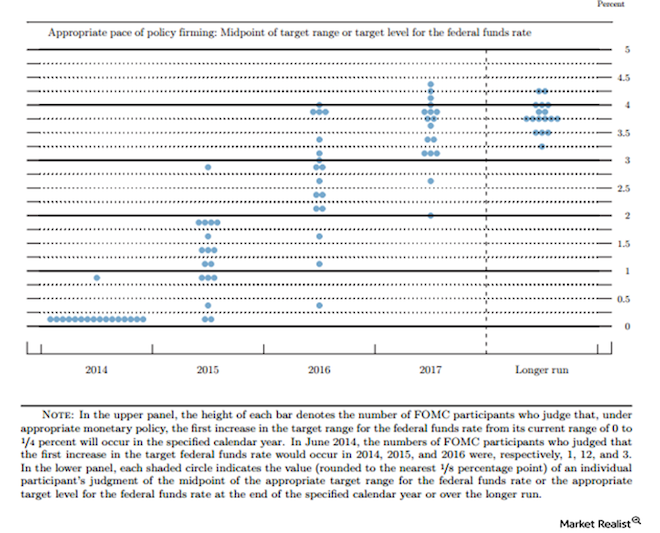 For example take the US 5-Year Bond trading with a Yield of 1.53%, remember this is for a 5 year time period, and if the Fed starts raising rates by June of 2015, roughly 8 months from today, the Fed has 10 members forecasting a Fed Funds Rate above 1% by the end of 2015, with 4 members between 1.75% and 2%. There is no way in hell the 5-Year Bond trading with a Yield under what the Fed Funds Rate could be in 2015 by their own Fed Forecasts, (with a highly dovish Fed slant by the way) there is no way this is a safe investment strategy. There is no way in hell this bond is any good this time next year with the current price and yield. 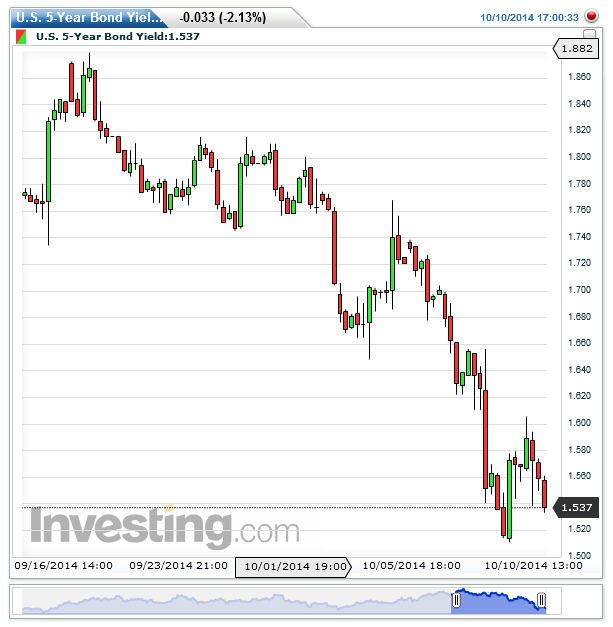 But remember this is a 5-Year Bond, so theoretically an investor is locking up the money for 5 years, and even based on the Fed’s own forecasts for Rate Hikes for 2017 (only 3 years from now) 15 Fed Members forecasts are all above 3% for the Fed Funds Rate. Remember this is for the Fed Funds Rate, and doesn’t even include an inflation forward looking component added to every bond, or just call it a risk premium that inflation could spike during the duration of this bond. By the way, Inflation is currently running at 1.6% by the government models.

In essence current bond holders have a negative real rate, the only way they make this risky trade is if they can borrow at essentially zero percent borrowing costs, use insane leverage, and ‘speculate’ on the low borrowing cost to bond yield Delta and also benefit from price appreciation by pushing the bond prices up as far as they can. I am sure this is the kind of risky behavior the Fed wants to encourage with their ZIRP program versus promoting sound long-term investment decisions that aren’t a threat to the financial stability of the system. Remember all these bond purchases that are only viable in a ZIRP Environment will have to be unwound – this unwinding is the systemic risk that the Fed has created! This is where the Unintended Consequences of ZIRP come back to bite the Federal Reserve. They cannot provide ZIRP with no restrictions and expect investors to make rational sound investment decisions, the cheaper the liquidity and the more available the liquidity is in direct correlation with the ‘riskiness’ of the investment choices. 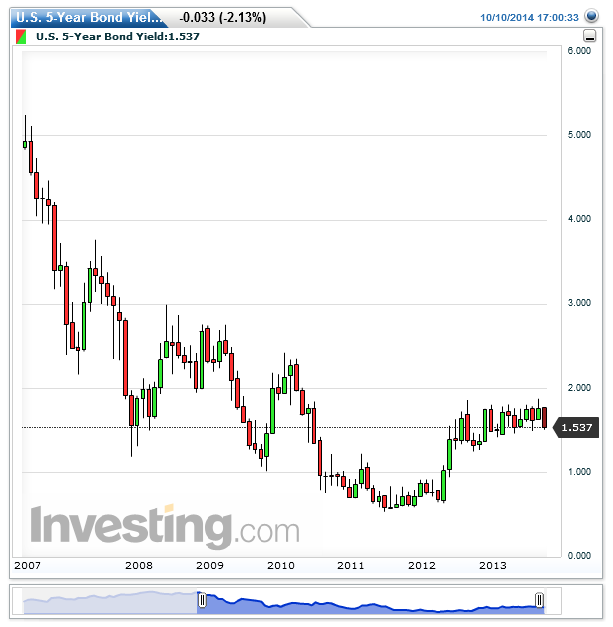 Literally the 5-Year Bond has to be one of the ill-advised investments in the history of stupid investments by speculators who bought this bond the past week. There is no way in hell this is sound risk reward investing, it isn’t even sound speculating. It is the most idiotic place one could store one’s money, and is indicative of what James Bullard and many see as major problems ahead for these speculators in the bond market induced by ZIRP borrowing costs. These investors will literally pick up pennies in front of a massive steamroller, more money has been lost chasing yield in the history of financial markets than any other mainstream trading strategy. It is amazing how risky and stupid speculators can be when their gains are rewarded by profits and fat bonuses and theirs losses are subsidized by bank bailouts!

Market Participants May Say they are onboard for June 2015 Rate Hikes, However they haven’t come to terms with this Reality given the positions they are putting on, and the length of time required to unwind said positions without causing major market dislocations

I think the Fed needs to get out their calculator and start realizing just how off-sides the mainstream bond market is in ‘actual terms’ to their own forecasts for rate hikes, calculate the amount of losses ahead for anyone holding a 5-Year Bond with a yield of 1.53% today, with a conservative Fed Funds Rate of just 3% during this 5 year period. Moreover, guess who are holding a lot of these bonds, financial institutions, namely banks. Is the Federal Reserve prepared to bail out these banks or buy these bonds all over again with an already stretched 4.5 Trillion Dollar Balance Sheet?

This is the kind of “Prudential Regulation” that Janet Yellen should be doing right now in assessing over the top risk taking due to zero percent cheap money slushing around the banking sector. This has encouraged all kinds of “imprudent risk-taking” by investors, and the Fed better wake up to the actual numbers we are talking about here, especially once you calculate the interconnectedness of financial assets, and the fact that many of these bonds are used as leverage and collateral for other investments.

The Federal Reserve is seriously asleep at the wheel to the massive bubble building in what is supposed to be a conservative market, but losses are losses, just start doing the math Janet Yellen. The Bond Market is in a massive bubble even by your own conservative forecasts, she better start doing some “Prudential Regulating” and developing a real hawkish tone just to get some of these overzealous speculators to start unwinding these massive positions. Forget the stock market, commodities, or Social Media Stocks they can go up or down; no real threat to the financial system, but the size of the bond market, and the sheer bubble that exists, is the real threat to financial stability of the entire system. Just look at the 5-Year Bond and tell me that price and yield makes any sense, (just do the math it doesn’t add up) this is symptomatic of the bond market in general, there is no way that any of those 10-Year European Bonds are any good during this duration of time, and many banks have these toxic assets on their books right now because of global ZIRP incentives. 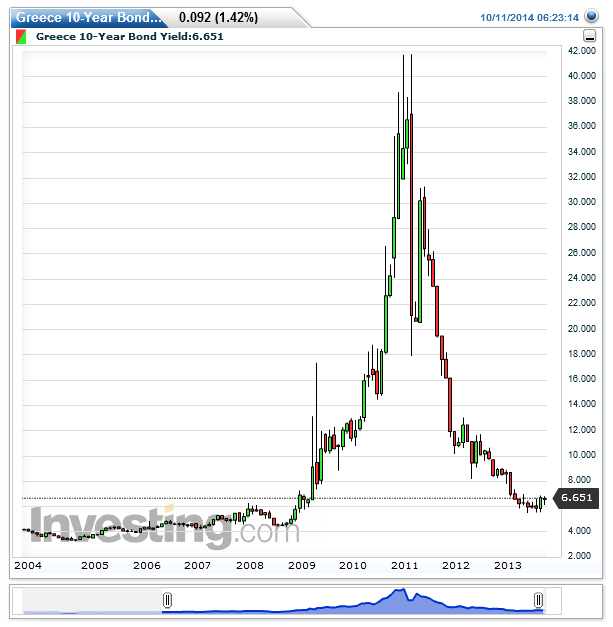 The difference between 2007 and today is these were largely sub-prime loans and overvalued real estate mortgages in the financial crisis of 2007/08; but this is the entire global bond market from Spain and Greece to the United States 5-Year Bond with rates rising by everyone’s standards in 8 months’ time by the Federal Reserve. There is no capacity in the ECB or the US Federal Reserve to buy all these toxic and deteriorating by the minute bond assets on banks’ balance sheets. This time the only option is major haircuts by bond holders, shoot even the best house on the block in the United States has a 5-Year Bond that from a price and yield perspective is going to cause major losses for these investors going forward!