Bond Kings to be Dethroned in Second Half of the Year

Jeffrey Gundlach of DoubleLine Capital LP says the 10-year U.S. Treasury note will likely trade in a range between 2.20 and 2.80 percent during the second half of year. Gundlach also said U.S. Treasuries are a buy for investors as they are yielding in the upper half of his projected trading range. He said this on June 10th of 2014 and it seems he still expects the 10-year yield to be lower than the 2.40% bottom put in about 3 weeks and 20 basis points ago.

He runs primarily a bond fund, and he gets paid mainly on assets under management, so talking one’s book to encourage more inflows into the fund is very important for his business model. Therefore it is hard to know whether this is just ‘sales tactical speak’ or he legitimately believes that the 10-year hasn’t put in the bottom for not only this year but maybe for the next five to ten years and beyond as many on Wall Street believe.

However, if he generally is drinking the Bond Kool-Aid, and who can blame him with all the craziness of central bank intervention, that means he didn’t take profits when many did at the 2.40% lows, as the same day yields were back at 2.47%, a 7 basis point move, and quickly moved another 25 basis points higher before settling back at the 2.60% level. If I were an investor in his fund I sure would have wanted him to take profits there ahead of another robust jobs report, a Fed meeting announcing continued tapering and maybe more tightening, and strong GDP numbers for the second quarter coming soon. 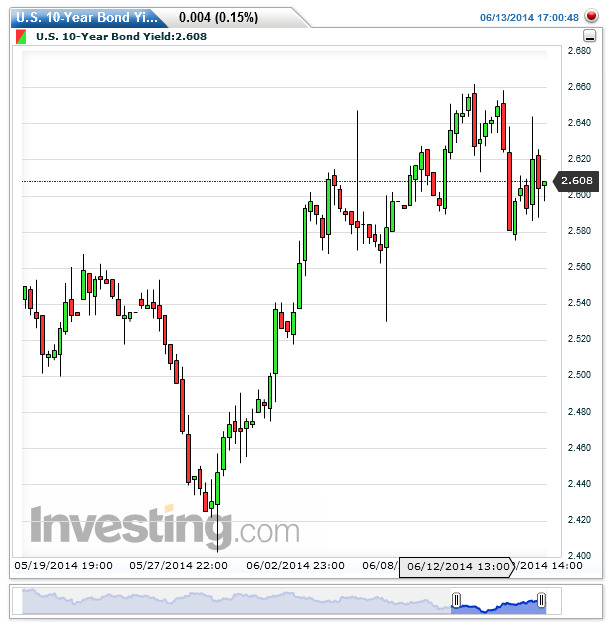 Bond King Knows Best versus Most Jobs Created Since 1999

But again Jeffrey Gundlach specializes in bonds so I am sure he knows best, but I would give him a friendly wager that the 10-year yield is higher than 2.80% over the next 6 months as our economy seems to be back-end predisposed to growth within a given year based upon everything from back-to-school retail spending, holiday supply chain drivers and football season.

I believe Gundlach is focusing too much on European Bonds relativity to US Bonds, and as Bank of England Governor Mark Carney said last Thursday U.K. interest rates could rise sooner than investors expect. This goes the same for US investors as the Fed could be forced to raise rates much sooner as Joseph LaVorgna, chief U.S. economist for Deutsche Bank recently put the robust job growth this year in context by pointing out that if we continue on this same pace of adding jobs to the economy more jobs will be created in 2014 than in any year since 1999.

Context for the Doom & Gloom Crowd

This is an amazing fact when you consider that anybody who could fog up a mirror was hired in the tech bubble running up to 2000. For all those who focus on the slow growth in the housing sector right now including Jeffrey Gundlach, remember that the jobs created this year are more than the 2003-2006 housing boom on an annual basis.

What Jeffrey fails to realize is that our economy has shifted from a housing based economy to a technology based economy; we are far healthier in the technology industry than we ever were in the 2000 boom era in technology.

This fact is lost on a guy whose fund is based in California which seems even more short-sighted in our opinion. Besides Apple, Facebook, and Google even Intel, Microsoft and HP are showing some life with new leadership changes. We are on pace to create more jobs in this country than the tech glory days, the housing boom years, and the mortgage underwriting boom on a year over year comparison, and Gundlach thinks rates are going to stay below 2.80% for the second half of the year with the Fed exiting the bond market?

Frankly there is a big difference between Europe and Japan on one hand and England and the United States on the other, the latter will be raising rates sooner than investors currently have priced into their models as Joseph LaVorgna states so succinctly: “In six months, the unemployment rate will be below 6% and the core inflation rate will be at 2%,” he said. “We are way ahead of schedule. We’re going to get to 5.2% or 5.4% a year ahead of schedule.” And that the “The Fed is behind the proverbial curve,” and “The Fed should be raising rates.”

Inflation Expectations to Rise in Europe

Frankly when it comes to Europe I think investors were just an example of the ‘inmates running the asylum’ who wanted a bunch of free money from the ECB, their inflation rate was still 0.5% by their measures and probably much higher in real terms.

Markets influence the Central Banks these days, and they keep begging hard and long enough eventually they force these weak central bank official’s hands within limits and have gotten their free capital. However, I think just as the Fed was raising the Fed Fund’s rate to 5.5% right before the financial crisis, the ECB decision on rates and other monetary stimulus measures is the last we will see for a long while.

To be more specific, we have reached the end of the easing monetary cycle with the recent ECB fait accompli and this sets the stage for the next tightening monetary cycle. This tightening monetary phase which is upon us and will have to run its cyclical course will be at least 5 years in duration in our opinion. The Central Banks will be forced to pivot to the tightening cycle in order to combat rising inflation pressures.

At any rate, I expect Europe will be raising their equivalent to the Fed Funds Rate which currently stands at 15 basis points in 9 months as they are more concerned with inflation levels than employment levels, and any uptick in measured European inflation freaks them out!

We think the inflation cycle is finally upon us even in official measurements that Central Banks focus on now that the wage part of the inflation puzzle is set to take off as witnessed by Seattle’s $15 minimum wage law recently enacted and these wage pressures start to push through to the rest of the country.

Wages are finally going up in all areas, not just the upper spectrum of employment. We are officially in the wage inflation cycle, and tightening monetary policy is to follow as the Central Banks are forced to cut off the free money supply. It is now going to start costing investors to borrow money which is a healthy thing in our opinion.

In summary, we believe Jeffrey Gundlach is wrong regarding the 10-Year Bond yield staying below 2.80% over the second half of the year as growth picks up and accelerates during the home stretch of 2014. We believe the Fed will be forced to raise rates before March 2015. Just like the Bank of England Governor Mark Carney’s recent market warning, Janet Yellen will be sending her own market warning over the next six months that she needs to move faster on rate hikes.

But that’s what makes markets, for every buyer there is a seller! And we are definitely sellers of bonds at these levels. We believe that anything below 2.60% in yield on the 10-year over the next six months represents a positive expected value proposition from yield appreciation over this time period.

The Outlandish Costs of Hosting the World Cup

Infographic of the Day: Study Abroad Without Breaking the Bank

Infographic of the Day: Study Abroad Without Breaking the Bank