Strategic lessons for investors in stock indexes, forex and other global markets, both technical and fundamental outlooks, lessons about what’s really moving markets now and what we need to watch in the future. Don’t be fooled by the prevailing calm.

The following is a partial summary of conclusions from our weekly fxempire.com analysts‘ meeting about the weekly outlook for global equities, currencies, and commodity markets.

We look at the technical picture first for a number of reasons, including:

Chart Don’t Lie: Dramatic headlines and dominant news themes don’t necessarily move markets. Price action is critical for understanding what events and developments are and are not actually driving markets. There’s nothing like flat or trendless price action to tell you to discount seemingly dramatic headlines – or to get you thinking about why a given risk is not being priced in. 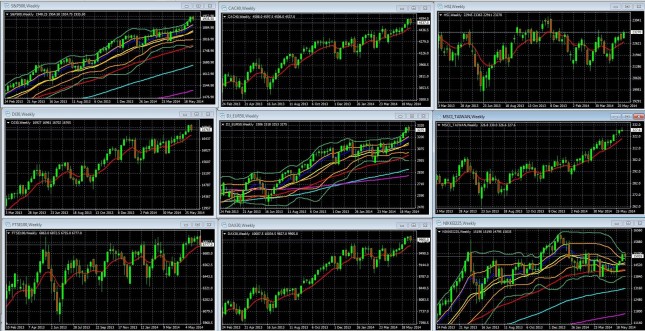 Our sample of weekly charts for leading global stock indexes shows all of our sample leading US and European indexes down together for the first time in a while, driven by a combination of fundamental factors discussed below, as well as nearby overhanging technical resistance of big round numbers (like 2000 on the S&P 500 and 17,000 on the DJIA).

Of course there are plenty of reasons for a sustained pullback, however they’re just the same ones we’ve had on the scene for years while the market kept rising anyway (weak recovery with indexes at multi-year or all-time highs, EU crisis risk due to failure to make meaningful reforms, etc.).

Thus these don’t explain or justify a reversal of the current bull market as long as the real drivers of its recovery remain in place: low returns and interest rates, central banks dovish, and no crisis threats. The EU’s flaws and risks are being ignored, and no one cares enough about the various bullying by Russia or China to endanger profitable business with either with meaningful sanctions.

Meanwhile all of our sample US and European indexes retain strong medium term upward momentum as per their weekly charts, as demonstrated by their remaining firmly in their double Bollinger® band buy zones and their 10-200 week EMAs ascending in unison with no sign of the shorter duration, more sensitive EMAs even flattening out, never mind turning lower and threatening to cross below the longer term EMAs

Investors will likely be watching for a near term bottom to form before considering new longs that could fuel another assault on yet another all-time high above these level on the US indexes (which of course influence EU indexes).

The only big lesson is that given the past week’s lower close, the S&P 500 and most other leading US and European indexes in our sample are now in the double Bollinger® band neutral zone, which suggests a horizontal trading range for the coming days.

There is no really meaningful support until we start hitting 50 day moving averages (at around 1900 on the S&P 500, so a test to that level (not even a 2% drop from Friday’s close) is still no big deal at all, and would not surprise us, especially given the fundamental picture described below, which is unlikely to inspire a new burst of optimism.

The consensus at this time is that prime market drivers this week for stocks were a combination of:

The looming overhead technical resistance (for example 2000 on the S&P 500, 17,000 for the DJIA), which had investors waiting for an excuse to take profits. That excuse came from:

If you’re not convinced that these were reasons should drive much of a reaction, you’re not alone. The minor pullbacks on the indexes suggest that markets felt the same way.

No huge deal, still progress, but the below forecast result emphasize the “slow” part of the “slow but steady” recovery theme. The miss also somewhat undermines the recent solid jobs figures, as these should in theory generate spending. It also undermines the excuse that earlier retail weakness was weather related, now that weather should no longer hinder shoppers’ spending.

Despite the drop in so many global stock markets last week, there are some developing bullish stories worth watching.

Goldman Sachs’ top economist Jan Hatzius believes the economy is now growing at an above-trend pace, despite Q1’s disappointing contraction. His reasons include:

The NFIB’s small business confidence index not only beat forecasts, its 96.6 reading was the highest since 2007. While such sentiment readings aren’t the most reliable leading indicators, the fact that planned compensation increases noted in the report reached their highest level since the start of the Great Recession, and rising wages should translate into rising consumer spending, which makes up about 70% of US GDP. 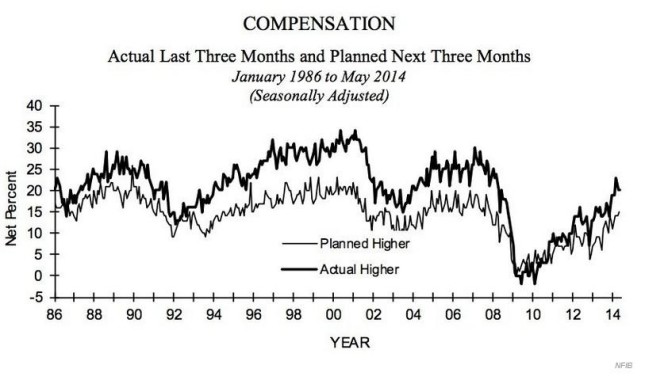 This idea is supported by the chart below, which indicates a rising number of businesses citing “labor quality” as their single biggest problem. 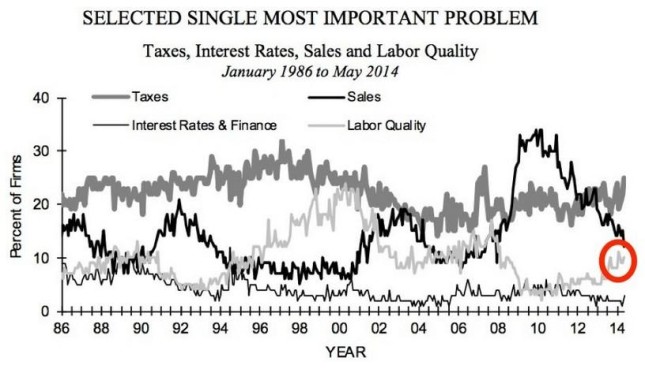 That said, note that this latest reading was still far below readings expected during an expansion. 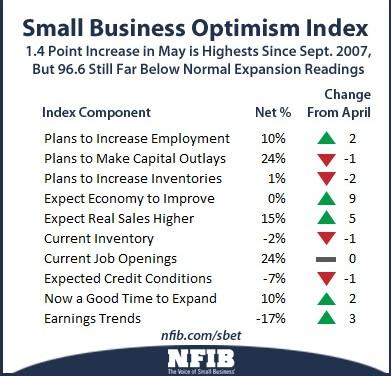 A brief look at the above components of the index shows plenty of pessimism:

In sum, we’ve improvement, but it’s strictly a relative gain.

We’ve another typical late month economic calendar week that’s light on top tier events with market moving potential. The FOMC meeting has the most potential to move markets, for reasons we discuss in some depth here. The German sentiment and inflation data are more relevant than usual for the coming months as they could be influential in deciding the ECB’s next easing steps. Weak results could be bullish for stocks and other risk assets as they could be seen as reducing German opposition to sooner, larger additional stimulus. Events to watch include:

Daily index charts suggest that we’re likely in a horizontal trading range in the coming days, with the odds favoring a modest test of support lower, most likely only about 2%. At that point we hit our first real support, and whether or not we get a bounce will depend on the week’s few top tier news and economic data offerings.

As always, we need to watch for anything that suggests the pillars of the current bull market are threatened. Those pillars are:

Will Lies Shape Our Actions in the Last Chapter of Our War in Iraq?

Will Lies Shape Our Actions in the Last Chapter of Our War in Iraq?