EURUSD Weekly Outlook: More Volatility Likely, But Can The Pair Finally Break Out?

FX Traders’ weekly EURUSD fundamental & technical picture, this week’s market drivers that could change it- the bullish, the bearish and likely EURUSD direction.

Overall risk appetite per sample of weekly charts for leading global stock indexes shows virtually no change from the prior week.

Key Points To Note From The EURUSD Weekly Chart Below 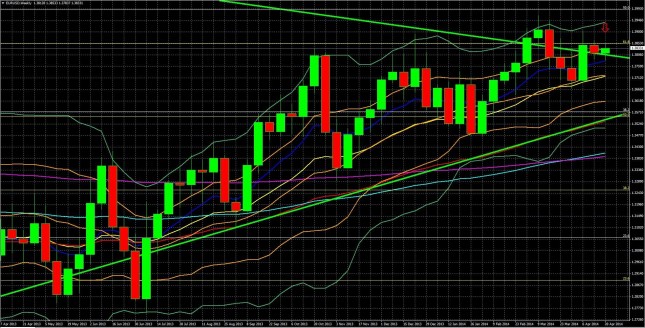 FUNDAMENTAL OUTLOOK: THE BALANCE OF BULLISH VS. BEARISH

As the above recent EURUSD price action demonstrates, there have been no significant new fundamental drivers. These typically come in two types:

The pair tends to move with risk appetite as reflected in the major US and European stock indexes. These continue to trade within a narrow range, so there has been no sustained pressure up or down from these. Last week the EURUSD tracked the S&P 500 well, with both making minor moves higher that brings both back to the lower edge of their double Bollinger band buy zones, suggesting rising odds of a break higher the coming week’s events (see below) are supportive.

Changes In EUR Or USD Specific Fundamentals: None In The Near Term

As we discussed in some depth last week here, the relative fundamentals for both currencies remain in equilibrium, with no changes in outlook for their underlying economies or for their central banks’ policies expected in the coming weeks.

Longer term most agree the ECB is moving towards EUR-bearish easing, but probably not before June, as noted below. The Fed is slowly tightening via its $10 bln/ month cuts in its QE program, but that’s already priced in. Actual increases in benchmark rates are not expected before April 2015, to the extent that you trust forecasts of events 12 months away.

-ECB attempts to jawbone down the EUR have had little influence over the pair beyond the day of the latest comments.

-The same goes for economic data, and earnings announcements, all of which have been mixed overall, and even the recent uptick in US data will need to prove persistent in order to bury doubts about the US recovery from the past winter’s weak data.

Summary Of This Week: Breakout Unlikely Despite Packed Calendar

This week, most of the big fundamental drivers come from the bevy of top tier US data releases, led by Q1 GDP, an FOMC rate decision, and US jobs reports on Friday, along with the earlier reports like the ADP non-farms payrolls that serve as leading indicators for the big Friday result.

The two big EUR drivers for the coming week and beyond are:

Beyond next week’s U.S. economic reports, the big wildcard is whether we see an escalation in the conflict between Russia and Ukraine, because that has not yet been priced in. If Russia invades Eastern Ukraine, we could see a deep sell-off in currencies and equities on uncertainties about the effects of yet a new round of sanctions. We still see such selloffs as buying opportunities for those with medium-long term time horizons, as detailed in the above noted report, but in the shorter term selloffs could easily come, with the EUR more likely to suffer than the USD.

As the below chart suggests, continued inflows to EUR denominated assets, ranging from riskier GIIPS bonds to more conservative German assets, continues to provide a bid for the EUR despite threats of coming ECB easing, Russia-Ukraine tensions, and of new EU crisis flare-ups. 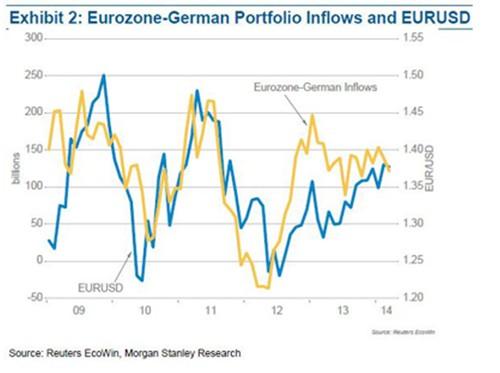 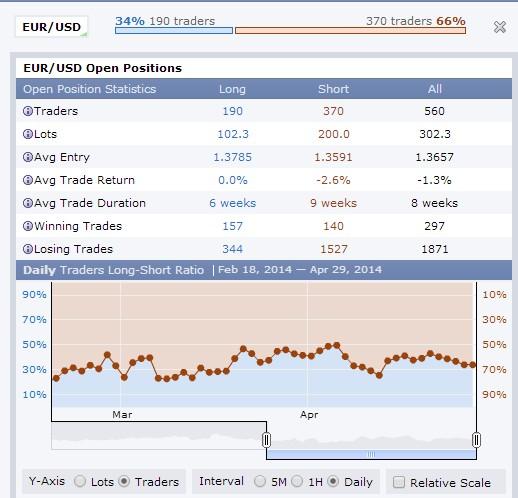 This week’s calendar is heavy on top tier US data, light on other top tier data from the biggest economies, and almost devoid of top tier EU data, so the pair moves with US reports and overall risk appetite.

Earnings season has thus far been mixed, and usually by this fourth week that theme is set and so earnings lose much of its market moving potential.

Advance GDP: +2.6%/+1.1% Like all the major US data releases over the next month, these are critical for either confirming or dispelling the excuse that early 2014 weakness was due mostly to temporary weather conditions. Strong results not only reaffirm the US recovery, they also feed expectations for an additional data boost as deferred spending adds to coming data.

FOMC Statement: Important only if it changes market perceptions (correct or not) about Fed policy. No changes expected until we see a sustained change in US data.

Chicago PMI: 55.9/56.6. The jobs component of this manufacturing index may influence sentiment about the Friday BLS report.

Given the low likelihood of surprise from the above discussed fundamental drivers:

Infographic of the Day: Your Tax Dollar Receipt

Infographic of the Day: Your Tax Dollar Receipt