First time unemployment claims for the first week of January are now lower than any first week of the year since 2007 as the housing/credit bubble economy was topping out. At that time, stocks topped 4 months later and the market subsequently collapsed, taking the economy with it.

The headline seasonally adjusted number for initial jobless claims this week was 330,000, which beat the consensus expectation of 338,000. Media reports noted that it was the lowest level in a month and that it suggested a healing labor market. Nowhere was it reported however that it was the lowest early January level in 6 years, and that that conceivably might imply an overheating economy.

That’s right, I said “overheating.” ZIRP and QE have created so much distortion that fewer people are being laid off than at any time since the economic peak of the last bubble. So is this bubble about to burst? Maybe it’s time to set our countdown clocks to T minus 4 months and counting.

Instead of looking at the headline seasonally adjusted numbers which tend to obfuscate almost as often as they reflect the actual trend, I concentrate on the actual, not seasonally adjusted numbers as they are reported each week by the Department of Labor. These are not small survey samples, but the actual claims collected by the 50 states and reported to the DOL. [The advance number misses a few thousand interstate claims each week, so the next week’s revision for that week is always up, but the change is normally less than a rounding error and not material.]

The DOL reports this data in detail, but not a single mainstream publication bothers to mention it. They run with the manipulated, fake data and ignore the actual data. As the DOL put it today, “The advance number of actual initial claims under state programs, unadjusted, totaled 486,033 in the week ending January 4, an increase of 34,384 from the previous week. There were 557,724 initial claims in the comparable week in 2013.” That was a year to year decline of 12.9%, which is slightly better than the middle of the range of the year to year change that has persisted since 2010.

Here’s what the actual data looks like, with lines connecting the same week each year to make the trend clear. 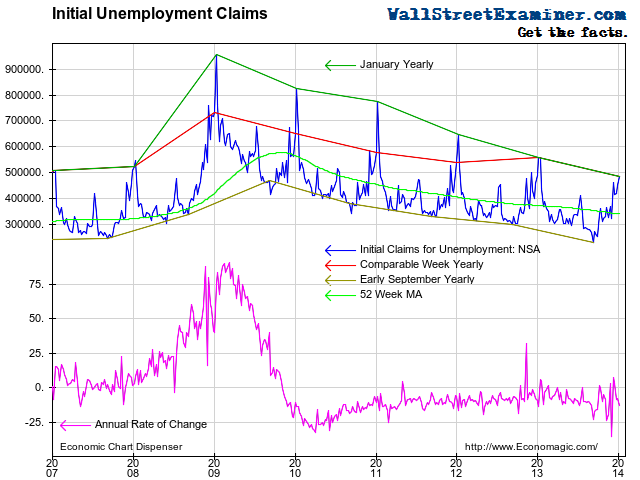 Regardless of whether the Fed has had the QE spigot open or shut, the rate of decline in new claims has been consistently around 10%. The question becomes whether the extraordinary policies of QE and ZIRP have artificially stretched this trend and caused markets and the economy to become distorted, as I have complained for years. Apparently, the FOMC is finally beginning to worry that that’s the case, according to the propaganda released yesterday in the Fed minutes.

The S&P 500 correlates strongly with the inverse of the actual weekly initial claims as plotted below. That’s because they both have the same drivers. The 13 month long parabolic rise in stock prices that has coincided with QE3-4, now appears supported by the big change in jobless claims over the past year. Employers are beginning to reflect the stock market’s bubbly exuberance, thanks to the gains in their stockholdings, whether their own companies or others. Many pundits will take that as good news. 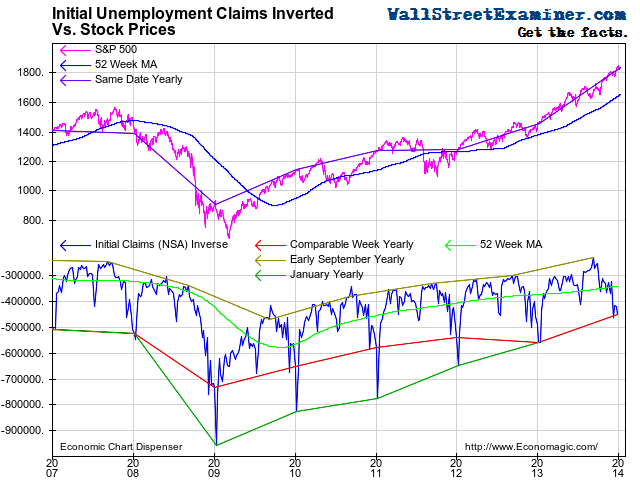 I don’t. Both the normal annual low in claims in September (the high on the inverted scale chart), and the normal annual peak in early January have now exceeded the levels seen at the last top in both the stock market and the economy. At that point in 2007, the Fed began to panic about the housing bubble and pulled the plug on growing its balance sheet before panicking the other way later in the year with its alphabet soup rescue programs.

It’s making the same kinds of whimpering noises today as it watches stock market and housing price bubbles (again in certain markets) growing out of control. If the Fed hardens in its intent to taper QE now, then we’re headed for one of those inevitable collapses that results from the Fed’s long term history of generational serial blunders. It’s just a matter of time.

I work on the timing issues in the study of liquidity flows and technical analysis in the Wall Street Examiner Professional Edition.

I tell CNBC Africa’s Lindsay Williams why I think the market will continue higher in 2014 on his nightly radio show on South Africa’s Fine Business Radio.

We’re Not in Kansas Anymore

Infographic of the Day: The Gay Marriage World Map

Infographic of the Day: The Gay Marriage World Map