The most successful ETF launch in 2012 was Pimco Total Return (BOND). Bill

And a whole lot of happy investors. For a guy who spends a lot of time lamenting the poor investment environment and musing about the end of robust bond market returns, Gross sure pushed a lot of right buttons in 2012. 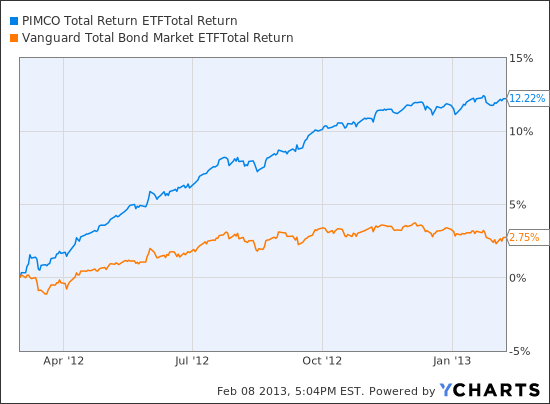 I guess the new normal took the year off; that 12% gain is about three times the return Gross and Mohammed El-Erian have been insisting we all need to get used to in the new (low yield) world of bond investing.

That sort of outsize gain is going to be ever harder to replicate this year, but Gross’ active hand may still have the upper hand over indexing.

The problem with indexing right now is that the Barclays Aggregate Bond index is loaded up on Treasuries and high-grade corporate bonds. Both those segments of the fixed income universe are suffering from Bernanke repression; with abnormally low yields there’s little room for further yield declines that would fuel price gains (Bond total returns are the sum of yields plus price change; and prices go up only when yields go down.) 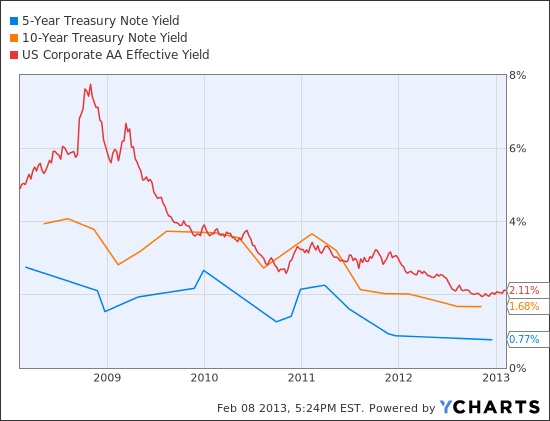 For the past year Gross has underemphasized Treasuries; the fund’s current 19% stake is about half the level of the Barclays index. Meanwhile investment grade corporates account for just 6% of Pimco Total Return assets, compared to 21% for the index. Gross also has 10% invested in municipal bonds, and another 10% of the bond portfolio is in in foreign bonds. Both those sectors are not part of the Barclays Aggregate index.

In a nutshell, Gross is clearly going his own (non index) way. In 2012 that paid off spectacularly for Pimco Total Return shareholders, and Gross’ long-term record shows his calls are often in the money. The 3, 5 and 10 year annualized performance of the mutual fund version of this new ETF was at least 1 percentage point better than the index, a wide margin in the world of (typically) single-digit bond returns. That said there have been-and will be-off years. In 2011, the mutual fund version of this ETF lagged the Barclays index by more than 4 percentage points.

Why Must Unregulated Mean Unacceptable?

Infographic of the Day: Climate Change

Infographic of the Day: Climate Change