If you’re looking to hit a home run over the next 12 months, your best bet for stocks to buy now is biotechnology companies – especially those focused on cancer research.

Here’s why: biotech stocks have been in a stealth bull market in 2012.

In fact, the values of the 230 publicly-traded biotech companies tracked by the BioWorld Stock Report have jumped by an average 38% year-to-date.  The third quarter was especially hot. The Nasdaq Biotechnology Index rose 10% over that time frame and is up a healthy 37% this year.

And, nothing is hotter than companies focused on the battle against cancer.

Take Medivation Inc. (Nasdaq: MDVN), for example. This California-based biotech has jumped from $23 to $46 a share, largely on the approval of Xtandi, its novel prostate cancer drug.

Thousands of other experimental drugs are going through various stages of clinical trials, and the largest category in the pipeline is cancer drugs. With that in mind, it’s safe to say that if you’re looking for a stock with big upside potential, cancer-driven biotech stocks should be high on your list.

A cancer diagnosis was once a death sentence — especially if you were diagnosed with the disease in its late stages.

But, both government and industry have spent vast sums in the last decade researching how cancers develop and spread.

And now all that investment is starting to pay off — recent clinical trials and treatment breakthroughs show real promise.

These revolutionary new therapies have given patients renewed hope — and investors good reasons to bid up shares of biotech companies that specialize in cancer cures.

The value of a company that’s working on cancer cures hinges on how its drugs progress through clinical trials. 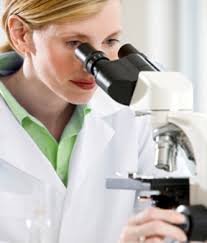 The Food and Drug Administration (FDA) requires drug makers to navigate a three-stage testing process to prove a drug’s safety and effectiveness.

New drugs are first tested on humans in Phase One trials to determine whether a drug is effective and if it has serious side effects.

Phase Two testing treats a specific illness in a larger group of patients at a predetermined dose level and measures how patients tolerate it.

Phase Three trials compare the benefits of the drug against existing treatments.

If the drug ultimately proves both effective and safe, the results are submitted to the FDA for approval.

But as a drug successfully completes each trial, the odds of success rise. And analysts start to boost their values — often by exponential amounts.

Still, almost anything can happen before a drug gets final regulatory approval.

For investors, that presents both challenge and opportunity.

The failure of a single clinical trial can send both the company and its investors into a tailspin. Conversely, if a drug succeeds, a small company could suddenly have the potential to double in price overnight.

By focusing on biotech stocks with drug candidates headed into late stage clinical trials you can vastly increase your odds of finding a winner to buy now.

Here are three cancer-focused biotech stocks that experts feel are worth a look:

As for a fourth, Private Briefing Editor Bill Patalon has discovered a biotech stock with a large, sudden and concentrated block of insider buying. In fact, these insiders just spent $353,000 on the purchase of nearly 215,000 shares of their company’s stock.

According to Bill, this company is so strong its shares could jump by 295%.