A Most Important Ratio is at a Crossroads

This is the third in a series of articles dedicated to the $CRX and its relationship with the S&P 500. The original installment was first published May 12, 2011 and as reported by Mr. John

Lounsbury, that particular piece became the #1 most read article on Global Economic Intersection over the following 2 quarters. For a completely inexperienced writer that was a rather surprising but welcome development because not only did it act as a vote of confidence that perhaps I should consider continuing to write the occasional article, it definitely indicated that readers were seeing merit in the revelations that particular study contained. A follow up article was published on Jan. 2 of this year once it became apparent that significant changes were occurring in the ratio and that it was indeed behaving as predicted. More specifically, as suggested would likely happen, the ratio began to reveal the fact that deflationary forces were showing up in the $CRX long before they would become readily visible to the naked eye by most other measures.

Ultimately the original goal of this study was to determine firstly whether or not the commodities only related stocks had been behaving differently than the stock markets in general over the past dozen years and secondly, to determine whether or not the results of the study could be used as reliable evidence that might assist in determining the future direction of the overall stock markets. The answers to the first question was “yes they have and in jaw dropping fashion”. And the answer to the second question was “most likely, since the ratio is very sensitive to the inflows and outflows of funds as a direct result of inflationary or deflationary forces”.

In this installment we’re going to zero in on a very recent development that seems to be pointing to the real possibility that after a year and a half of watching the commodities related stocks seriously under-perform the S&P 500 [for the first time in a dozen years], somebody has apparently lit a match to the bed of kindling otherwise known as the entire global commodities sector. I say that a bit facetiously because it’s more than obvious that a good deal of the history of the flight of capital into the commodities markets certainly wouldn’t have occurred had the central banks of the world not provided oodles of liquidity in the first place. But on the demand side there’s no question about it, in certain sectors of the commodities industry there currently exist very real shortages that in itself would absolutely drive commodities prices higher… whether the world was flooded with new liquidity every week or not. In some cases that is definitely what’s suddenly happening right now. 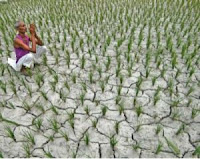 For example, although off the recent highs, the price of corn has exploded higher by 52% just since the end of May. Soybeans have risen from $1100 to $1780 in the space of just 9 months. That represents a whopping increase of (oh my, the Elliotticians are going to love this one) 61.8%. And the most frightening one of all… in the span of one month from mid June to mid July the price of wheat on the world markets popped a stunning 55%. Not all of these increases can be attributed directly to the generosity of Mr. Bernanke. A good deal of it is without a doubt weather related although let me be the first to theorize that any time the corn belt suffers a drought, that too is most likely Bernanke’s fault. Regardless of the reasons why grains are exploding in value, the net result is that in the past few weeks, ironically since QEternity was officially announced (or perhaps not ironically), the the US dollar, the $CRX, the $SPX, and the $CRX:$SPX ratio itself have all broken significant trend lines. In doing so, each and every one of them is signalling that the world may once again suddenly be in the process of blasting off in a new round of inflation, perhaps crushing inflation. These are serious trend lines, months in the making.

If history is to be considered a reliable guide we should trust that any time we see the $CRX rising and it’s ratio with the S&P 500 rising, the stock markets in general have risen as well… every single time. So ultimately what we want to know is whether or not the ratio has indeed recently turned higher with conviction… and whether or not it is likely to be a sustained assault. So we begin with the monthly chart below which covers the entire duration of this study going back to late 1999:

The first thing that just jumps off the chart, the very reason for this article, is the fact that for 4 weeks now the ratio has been putting in an effort to find a bottom. True enough, it is entirely possible that it could be nothing more than a standard re-test of the yellow 13 year long rising trend line. However, fundamentally I think there are numerous reasons to doubt that’s the case. For one thing, the central banks of the world have made it very clear, they are all going to print their own currencies in an effort to reflate the entire world. It’s essentially an admitted no holds barred race to the bottom for the currencies. The second reason is that the overall food supply for all of humanity is deep, deep under water. And no I’m not talking about the fish supply because that’s the only food source that should be deep under water… and it’s not there. The food supply for all of mankind is in trouble and possibly irreversibly so. In other words we may never catch up from here, especially with the population of the planet continuing to grow relentlessly while the sources of food diminish every single day. It’s a head on train wreck happening in slow motion right before our very eyes. Jim Rogers is no stranger to the scary implications these trends carry. I’d like to be able to claim that Mr. Rogers and I had a lengthy telephone conversation about the situation last evening but unfortunately I cannot. It seems that every time he calls me I’m busy putting a new roof on the igloo or something. In any case, here’s Jim Rogers’ take on the worsening food commodities story:

Markets Close Up, Bears Moved To The Wings

Markets Close Up, Bears Moved To The Wings