The Dow: 83 Years of Cycles

History moves in 36-year cycles. Why is this so? I don’t know. Plato writes that “God geometrizes”; and that: “The Laws of Nature are the thoughts of

Kepler wrote “Geometry is one and eternal shining in the mind of God. That share in it accorded to humans is one of the reasons that humanity is the image of God.” He also wrote: ” Geometry, co-eternal with God and shining in the divine Mind, gave God the pattern… by which he laid out the world so that it might be best and most beautiful and finally most like the Creator….”

We see that 36-years can be viewed as an emblem of a full circle, 360 degrees. My claim is that history moves in 36-year cycles, with 18-years of expansion always followed by 18-years of contraction. These 36 year cycles, in the economic world, can be broken up for further clarification into four cycles that correspond to the structure of the earthly day, which is also a reflection of the structure of the earthly year.

What does that mean? Growth begins in the Winter (Midnight) with the seed in the ground, the buried form, beginning to rise. All Sun Heroes in ancient mythologies (the most recent being Christianity) are born around December 21 for a reason. In the economic realm, this relates to the Reflation Era, after a Deflation has run its course. Winter to Spring, Midnight to Dawn, covers the Reflation Era, as the economy expands but meets heavy resistance from continuing forces of deflation.

Spring-Summer (Dawn to Noon) is the Infallation Era. Deflation is roundly defeated. The economy expands; resistance is weak and almost non-existent.

Summer-Autumn (Noon to Dusk) is the Disinflation Era. The expansion has ended; deflation has begun; but the economy still attempts to expand, usually with much assistance from government monetary policy. Vast amounts of money are spent in denial that the expansion is over; massive debts are taken on to keep deflation from winning.

In our century we have been through several of these cycles:

Here is one of my diagrams depicting this cyclical swing from the seed-in-the-ground, Winter, to the seed in the fruit at the top of the tree, Summer. The sap in the tree rises from Winter to Summer; and then falls back to protect the root-system when the growing season has ended and the difficult Winter Season approaches. The hexagran on the left divides the four growing seasons into six seasons, with periods of relative price-stability at both the tops and the bottoms. 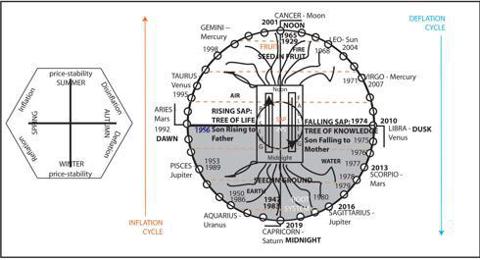 The Dow Jones Average (stocks in general) also participate in these cycles. I intend to present three charts showing these cycles in Dow charts from 1929. The Deflation Cycles do not take humanity back to the stone ages in terms of stock prices. Often there is a sharp initial correction; then quite often we have a sideways market. In all, stocks tend to stay flat for 18 years. We lose time in terms of investment. This is very clearly true in terms of the first chart: 1929, peak of inflation; deflation sets in. 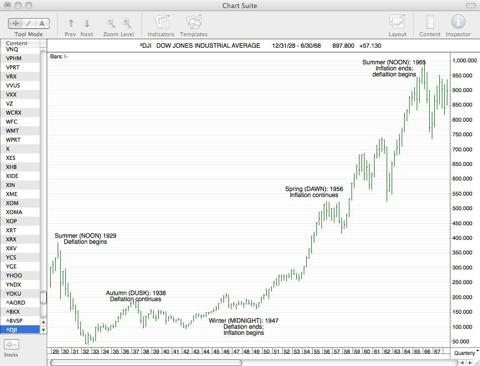 Let’s look at the second chart. Similar pattern: 1965 is the apex of the expansion. There is no great crash. But from 1965 (Noon) to 1974 (Dusk) to 1983 (Midnight) there is an appreciation of about 1% per year. If we adjust this chart with inflation, we get a much different picture. We lose money. But we are, at this moment, only looking at stock appreciation. 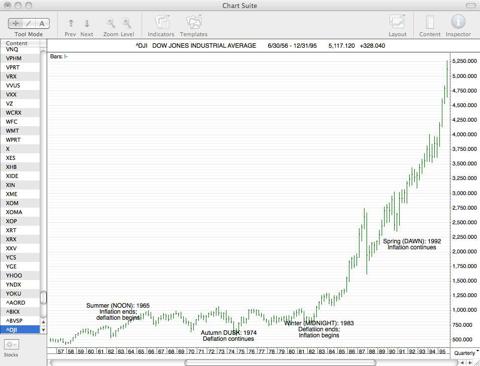 The third chart is similar also. Stocks fly up against no resistance until the apex in 2001. Then the inflation stops; and the disinflation begins. The Fed lowered interest rates to the floor after the Nasdaq Crash and then helped to ingnite the Housing Bubble that was an attempt to override the Deflation Cycle. The resulting debt orgy is the reason we are now faced with the most difficult economic landscape in the history of our nation — and the most troubled global economy landscape ever. But note: stocks had a heavy fall; then rallied back. But they are still moving sideways. There is no breakout here. And there won’t be a breakout until 2019. 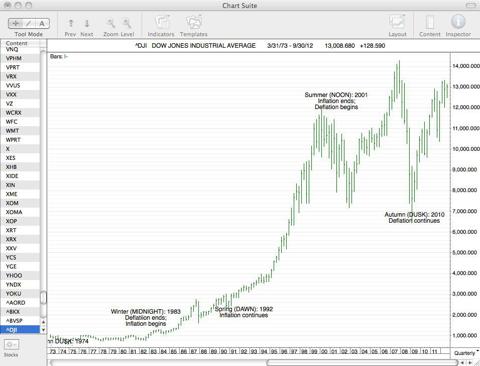 We are near the top of the trading range and should have a new spate of selling that carries stocks back toward the bottom of the established range. In 2019, PE’s for the index will need to be trading in the low range, which is a sign of the end of the Deflation Cycle.

I wrote an article last week about this, in which I look at the very interest work of Ed Easterling (wonderful charts from Ed) that seem to suggest a period of heavy selling will carry us down again before 2019.

I want to borrow two of Ed Easterling’s charts from that article to use here for emphasis. Easterling’s analysis uses year-end PE prices, which he explains thus:

To reduce the distortions to P/E caused by the earnings cycle, earnings (E) have been normalized using the approach popularized by Robert Shiller at Yale. The index for the numerator (P) is the year-end value for the S&P 500. Therefore, the P/E displayed on the chart is the year-end Shiller P/E (i.e., Year-end P/E10).

His first chart shows what he calls the Bull Markets of the Twentieth Century — we are describing different phenomena, so our dates don’t always line up. The key point he makes is that Bull Markets always begin in the LOW PE green band at the bottom of the chart. The first chart shows all his Bull Markets beginning the green band and rising up to the red band at the top of the chart, the place where Bull Markets end and Bear Markets begin. Obviously, the dark blue line in the body of the chart represents our current 1983-2001 Inflation Cycle and 2001-2019 Deflation Cycle (my terms, not Mr. Easterling’s). 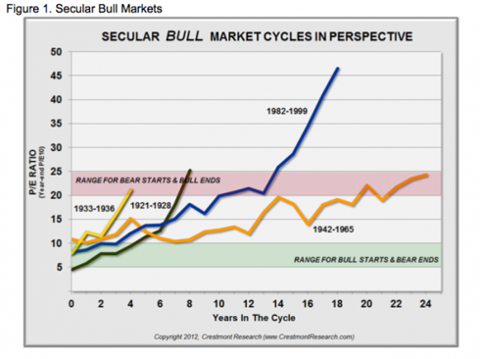 Ed’s second chart is intriguing because it show how all the earlier Bear Markets ended back in the Low PE green zone at the bottom of the chart except the one we entered in 2001. From 2001-2010, the Disinflation Period, it rose, and traveled sideways, so much so that it is still in the High PE red zone at the top of the chart where Bear Markets begin (and Bull Markets end)

Much of this is explained by central bank attempts to forestall deflation, which happened, in fact in all the other Deflation Cycles also. The 1965-1983 Deflation Cycle has one benefit that the 1929-1947 and the 2001-2019 Deflation Cycles don’t have. America did not have a HUGE mountain of debt to unwind in 1965, like it did in 1929 and has today. A lot more debt has to be deflated today that every before.

The 1965-1983 Deflation Cycle was largely mitigated by Fed reflation policies — of course we endured four or five recessions during that period, high unemployment, and sky-high inflation that ended with Fed Funds rates over 20%. 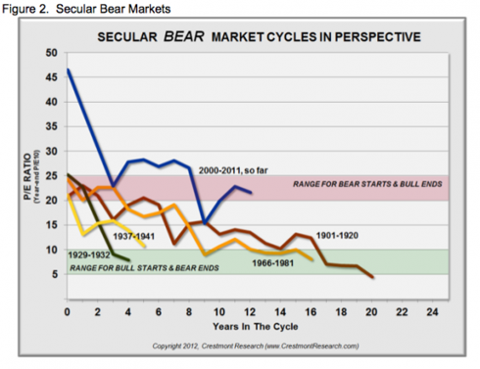 Why Deflation is Inevitable

Below is a picture that shows quite clearly the huge problems with debt we had in 1929-30 and today that we did not have in 1965. This creates much more of a need for deflation today than in 1965. The whole point of the Inflation Cycle is to move out of the Growth Cycle into the Rest Cycle. The economy grows for 18 years and then rests for 18 years. The Rest Cycle is just as important for the process as is the Growth or the Inflation Cycle. Deflation Cycles need to:

2) move the country away from the speculative frenzy of the Inflation Cycle which favors the rich and special interests;

3) close the gap between the rich and the poor, so the country can avoid civil war;

4) raise interest rates to do all of these things, destroy debt and reward savers especially. 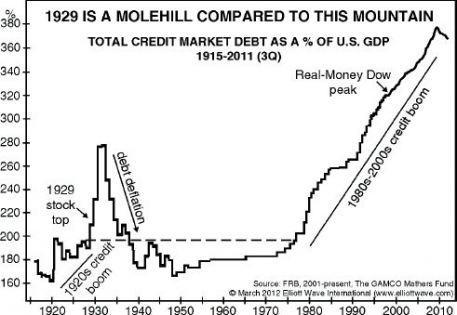 Easterling’s point, in his second chart, is that stocks need to decline back to the green band at the bottom of the chart before another Bull Market can begin again. I say this decline needs to be done by 2019, since geometry is the trump card in all of this. 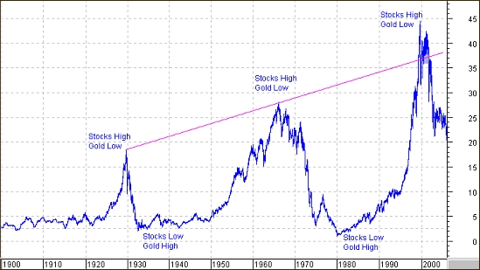 The Secular Bear Has Only Just Begun by Ed Easterling

Michael J. Clark is located in Hanoi, Vietnam. He was born and raised in Sinclair, Wyoming. He is a poet, novelist, artist, historian, and market analyst.  He has a fine arts portfio, a writing portfolio and the working draft of a new book.  He also blogs at Seeking Alpha.  Michael has developed a successful market timing system.  He is retired from a 30-year career in academia.

Is It Nightfall for Knight Capital?

‘You didn’t build that’: A Fifth Similarity between Communism and Democracy

'You didn’t build that': A Fifth Similarity between Communism and Democracy