Use Caution Looking for Dividends

We have been looking in some of the places that have not been all that popular recently among those seeking dividends:  Small caps and REITs.  There are some

exceptionally attractive dividends in the these two areas and also some potential traps.  Let’s look at some of the opportunities, starting with small caps.

A handful of interesting small caps are offering dividend yields three to four times 10-year Treasuries now, which makes a trip to that wilder side of the market worth investigating. We found four companies with dividend yields around 7% to perhaps add some income to a portfolio.None of these companies has much analyst coverage, which is one of the many reasons investing in small caps is riskier than buying up Dow stocks. Their investors can and have been blindsided by unexplained sell-offs. That said, each of these companies was covering its outsized dividend with earnings at its last report. While that doesn’t guarantee a future payout, it’s at least reassuring.

Intersections is a 15-year-old company that sells services that protect consumers and businesses from identity theft. And for awhile last spring, it was one of the hottest companies on Wall Street. 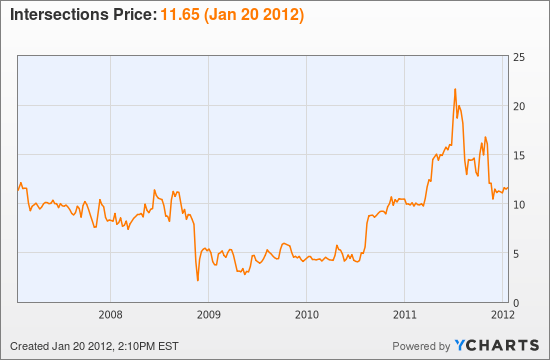 Then…well, a lot of selling happened. Company announcements in the second half of 2011 included a 33% dividend increase, third quarter results of modest earnings and revenue growth, and projections of underlying growth in 2012 of 5% to 8%. The shares are going now for about 11 times past earnings.

Israel-based Ituran puts GPS-type locations devices in vehicles so its subscription service can track them for fleet managers, or for any customer looking for his stolen car. The company has gone global in a big way, and at last report, sales were growing about 12% a year; earnings were up 17%; and the mood was nonspecifically optimistic about growth in 2012. The company sets the dividend as a percentage of net profits, which makes for a big yield now.

YCharts Pro gives the company a strong rating for fundamentals and an excellent rating for share price value.

USA Mobility provides wireless communications systems like phones and pagers (yes, some industries still use them) to government, healthcare and emergency response teams. The company customizes the systems, which makes it a popular player when a hospital or SWAT team needs communications systems that can’t easily be knocked out.

The company has been in recovery mode since budgets at such places began to loosen up last year. Earnings are easily covering its dividend now.

YCharts Pro gives it a strong rating for fundamentals and an excellent rating on share price value.

A key problem for United Online is its dial-up internet service, a business so archaic that even a big dividend can’t make up for its dismal prospects. But that’s less than 16% of United’s revenues now and dying fast.

United would really like you to focus on its growing FTD division (they own that flower delivery business), and the potential for its social networking sites like Memory Lane. That site contains Classmates.com, as well as access to memorabilia like old film clips and yearbooks and user reward tools designed to subscribe. Website revenues were down about 10% at the end of the third quarter, but the company says it’s early days. United is willing to pay up to keep shareholders happy and at least for now, has the earnings to do so. 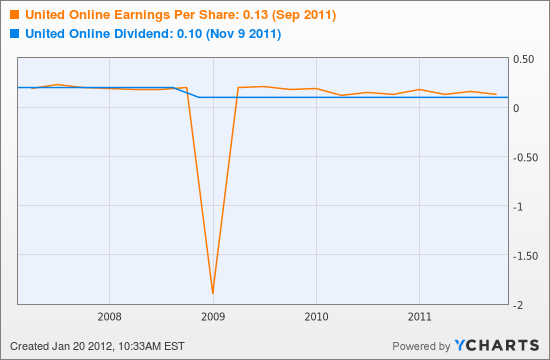 YCharts Pro gives United only an average score for fundamentals, in part because of its debt level.

Good news for homeowners often spells bad times for home mortgage REITs, and several Joe Public victories lately threaten those 13%-to-20% dividend yields that mortgage REIT investors have grown to love. Are the risks so big now that investors should snub those double-digit offerings?

The latest problem for mortgage REITs involves government-backed refinancing programs for underwater homeowners. They’ve gained steam again, as most states are eager to makes deals that will mitigate their liability for foreclosure abuses. This does nothing for home mortgage investors such as American Capital Agency (AGNC), Annaly Capital (NLY) and Hatteras Financial (HTS), the three biggest companies investing in agency-backed home mortgages. With Freddie Mac and Fannie Mae behind their investments, they have little to lose if some homeowners default anyway. They will, however, lose millions in profits if big numbers of the mortgages they’re holding now are paid off early in favor of new, cheaper loans.

The bigger picture for mREITs is more gruesome. Broadly speaking, the companies make most of their money by borrowing at low interest rates and lending at higher interest rates. So when the spread between those two rates is wide, like it has been in recent years, mREITs tend to roll in the money. That’s one reason their share prices saw very nice gains in 2009. 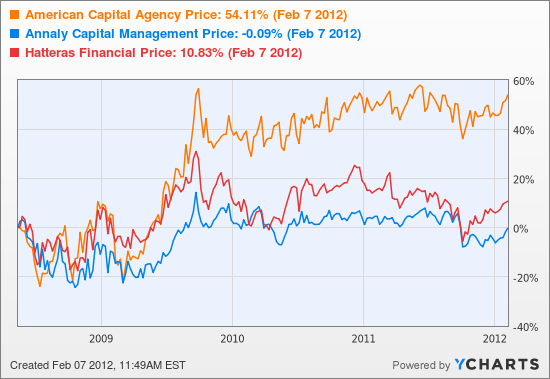 Since the beginning of the year, short-term interest rates have been going up while long-term interest rates go down. (The chart below shows that trend, rather than actual rates.) REITs work a variety of derivative and hedging schemes to keep cash flowing, but they rarely escape the fact that profits shrink when short and long-term rates get closer. 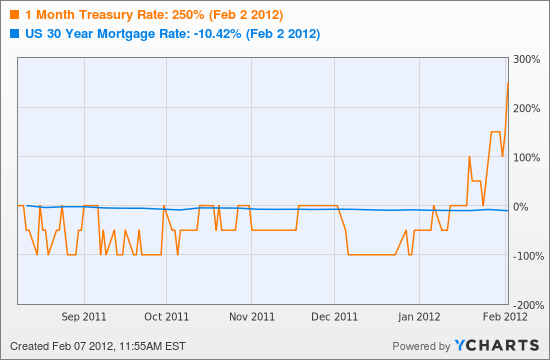 Perhaps the biggest threat to REITs is the potential for a drying-up of the short-term funding necessary for them to continue business as usual. We got a whiff of such a scenario on several occasions last year when worries about the European debt crisis caused U.S. banks to tighten their wallets. REIT prices dropped as much as 15%.

And just as the companies were coming to grips with this new reality, the Securities and Exchange Commission began to question whether the government should be granting these entities the special tax status that makes them thrive. At issue, and now in public comment stage, is the leveraged status mortgage REITs typically maintain. 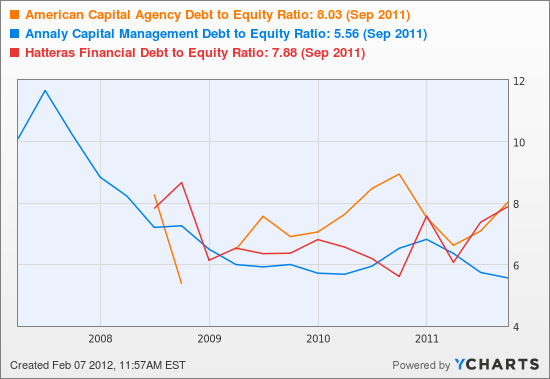 Several REITs, including American Capital and Annaly, have already cut dividends in anticipation of harder times ahead. But yields in the sector still remain among the highest in the market – American Capital will be close to 17% even after the cut, and Annaly and Hatteras are still at around 13%.

With total 5-year returns for these companies ranging from about 70% to 200%, YCharts Pro considers all three of them undervalued now and gives each of them strong ratings for fundamentals. And despite the obstacles ahead, analysts are still quite gung ho for American Capital, the middle in size of the three with a market cap of $5.3 billion. Several major investment firms, including Morgan Stanley and Barclays Capital, started coverage of American Capital with overweight ratings recently. Annaly and Hatteras are decorated largely with hold ratings.

Despite the kudos, few expect high REIT payouts to continue for long. Government-backing against loan defaults adds an element of safety to these kinds of REITs, but it doesn’t protect against everything that might hit profits and lower payouts. Then again, real safety, in the form of 10-year-Treasuries, is paying about 1.86%.

Editor’s note: Source material for this article came from:

No Market Volume, No Telling What Is Going To Happen Next

No Market Volume, No Telling What Is Going To Happen Next