The basic proposition in this article is that there has been significant evidence (admittedly of a rather technical nature), demonstrated during recent market “difficulties”, that there is considerable relative strength for the Russell 2000,the US micro-cap index, in comparison to the larger cap index, the $S&P 500.

After the tumultuous conditions across most asset classes over the last week or so, there are some interesting patterns emerging which point to the fact that the micro-cap stocks are behaving far more independently of macro risk than might be expected. In fact there is evidence going back to September 2010 that suggests that there is an asymmetry in the performance of IWM and SPY (I shall use the two ETF’s IWM and SPY as surrogates for the cash indices).

One of the features of this asymmetry is that, during recent months, the beta value of IWM has been increasing when the overall market is performing well and has been decreasing when the overall equity markets are suffering from risk aversion. Based on a rolling 20 day linear regression the readings for beta (i.e. the gradient of the linear regression) were moving up towards a peak of about 1.8 during the strong upward impulse in prices during the latter part of 2010 and the first few weeks of 2011, and, during the recent price retreat, the beta value has declined sharply with a reading on Friday of just 1.14. This is not what one normally expects to see, as will be discussed below.

The chart below captures the relative price performance of three major US equity indices since September of 2010. The Russell 2000 has delivered a return of 25%, whereas the S&P 500 has returned 16% and the DJIA about 14%.

Significantly the recent sell-off has been more severe for the large cap indices than for the 2000 smallest stocks that are traded on US exchanges and which are the constituents of IWM. 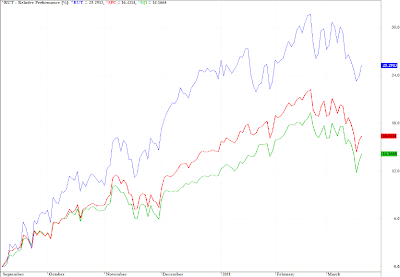 A second technique to illustrate the recent decline in the correlation or co-movement of IWM and SPY is to track the correlation between the daily price changes of each index via a linear regression. The regression is based on daily changes in each index and a 20 day sampling is rolled across the complete data set for the last two years (500 data points)

The chart below shows that the square of the correlation coefficient (or R squared) for the most recent 20 day period which ended last Friday was 0.78 and, more typically over the extended period of two years, the R squared value has had an average reading of 0.86.

In essence what is being demonstrated statistically is that there has been a looser coupling of the daily movements in the two indices and that, somewhat surprisingly, this coincides with the recent volatility and sell-off in the overall market. 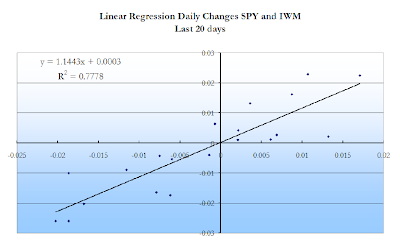 The next chart illustrates the degree of co-movement between SPY and the AUD/JPY cross rate which can act as a very good barometer of macro risk and which in turn can act as a driver as well as a reflection of the major shifts in asset allocation by large funds and asset managers.

The R squared value for the associated movements of SPY and AUD/JPY revealed on the chart is 0.45 which is fairly typical of the degree of correlation exhibited over the last two years. The actual 20 day rolling coefficient value for last Friday was 0.67 – in line with the typical performance between these two instruments – and also one of the most pronounced correlations between any FX pair and a major global equity index.

The manner in which these two asset classes move together is a surface manifestation of the underlying inter-dependent nature of large allocation decisions by global fund managers to both risk on/off currency plays and risk on/off equity (and commodity) plays. 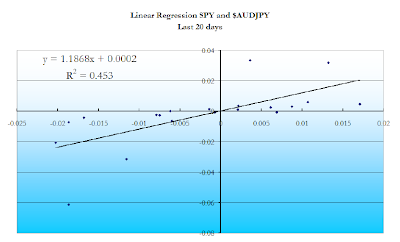 The R squared value of just greater than 0.2, which is indicative of a coefficient of correlation of around 0.45, is not only half the value observed above for the SPY and AUD/JPY correlation, but also from an historical perspective is also considerably below the average value for the R squared value (over the last two years) which is approximately 0.5. 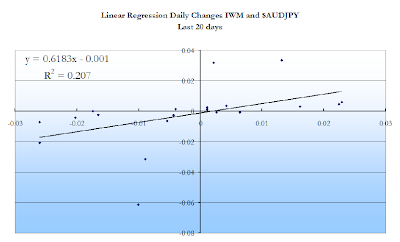 The conclusions that I am drawing from this hopefully not too statistically arcane approach are as follows:

1. Since the micro-cap stocks are showing less tendency to track the larger cap indices when the overall market and risk appetite are in retreat, there is evidence of a de-coupling between the larger macro risk environment and the performance of the micro caps. This is a surprising result as it indicates that when the large caps are getting beaten down the most, the propensity of fund managers to liquidate long positions in the micro caps is not taking place.

2. The large structured trades (often implemented via complex inter-market algorithms) where ongoing adjustments in large futures trades in the S&P 500, and large movements in the SPY exchange traded fund, and the FX market are very closely inter-twined, are not being seen recently in the behavior of the micro caps.

3. There has not been evidence of any liquidity panic in the US equity market despite the recent turmoil, which is largely a by-product of the almost daily injections of several billions by the Fed via its open market operations activities. In less liquid market conditions, where funds are keen not to be exposed to liquidation difficulties, there would be a tendency to avoid the smaller cap issues as they will tend to more difficult to sell when managers in general are heading for the exits.

4. One could also make the case that what is becoming evident might be a variation on the “Long tail” thesis which has been expressed in relation to new business models for mass distribution of companies like Amazon and Netflix. The key idea is that, just as with books and DVD’s, the less popular stocks are now more accessible and less dependent for their level of demand on the activities of large nodes in the market network. This also has, as a consequence, the benefit that smaller stocks will be less exposed to the rapid re-allocation shifts executed by the larger nodes (i.e. prop trading desks and quant funds) in the market network.

Clive Corcoran is an FSA registered investment adviser providing private client wealth management services, as well as being an author, financial educator/mentor and an independent trader.   He has written “Long/Short Market Dynamics: Trading Strategies for Today’s Markets” (Wiley, 2007) and two textbooks, “Financial Markets, and Portfolio Construction Theory” and “Wealth Management”.  He currently is a director of Morphology Management Inc. which has developed a systematic trading platform. Clive has been a regular analyst/contributor to CNBC Europe and other broadcast outlets.  Previously he was the founder and CEO of a personal and business management company for entertainment professionals that operated in Los Angeles, London, Munich and Toronto.  Clive’s Blog Morph366