Core capital goods orders, adjusted by the PPI to reflect the actual volume of orders over time, fell 1% year to year in April. We know that the BLS is understating the inflation rate, so the actual trend is probably worse than this. But this is bad enough. 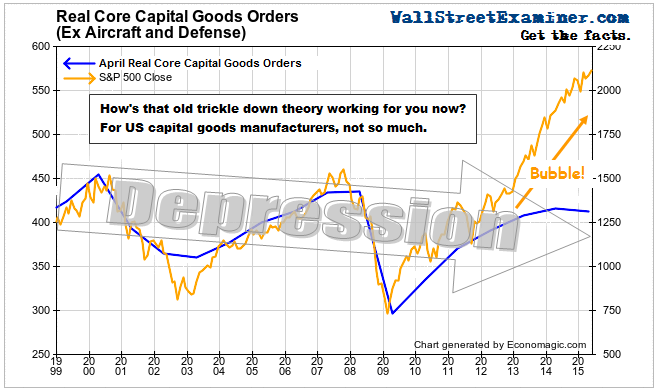 The recent “recovery” may be beginning the next down cycle from a weaker level than each of the last two expansions. Is this despite 6 years of money printing and ZIRP? Or because of it?

QE and ZIRP stimulate financial engineering and wild speculation, not industrial engineering and prudent capital investment. I’d argue that they divert capital away from rational investment in favor of easy money schemes like HFT and “riskless” free carry trades. They encourage corporate executives to issue stock options to themselves, then have the corporation buy them back, rather than invest in their companies to improve and sell more of their products.

At the very least, this is more evidence that trickle down economics doesn’t work. In November of 2010 Ben Bernanke wrote in the Washington Post that the Fed was going to pump up stock prices so that stockholders would be richer and spend more, and companies would invest more as their stock prices went up. That was the old trickle-down theory. We now know for sure that the “beneficial” effects of the resulting bubble are limited to the dealers, speculators, and bankers who benefit from central bank free money. The trickle pools at the top.

Secular Stagnation: The History of a Heretical Economic Idea