In 1990, the pollsters from Gallup started asking working Americans how likely it is Social Security will be there for them when they retire.

It’s not quite that bad, according to the actuaries who keep an eye on the Social Security program. Last year, they projected Social Security reserves would run dry by 2033. After that, incoming Social Security taxes would pay only 75% of currently scheduled benefits.

And what if medical science continues galloping along and extends the life span of the average baby boomer by, say, another 10 years? Our newly formed Apogee Research Group here at Agora Financial plans a comprehensive study exploring the impact of longer life spans on our various social insurance programs.

Today, we take on a counterintuitive proposition: Social Security will remain solvent and still pay full benefits for another three or four decades.

Don’t breathe a sigh of relief. The way we’d get there isn’t pretty.

All over the Western world, well-educated high earners are staying in the workforce longer than they used to. In the United States, nearly two-thirds of men with a professional degree ages 62-74 are still working, if not necessarily full-time. Among high-school graduates, it’s only one-third.

“Employment rates are falling among younger unskilled people, whereas older skilled folk are working longer. The divide is most extreme in America, where well-educated baby boomers are putting off retirement while many less skilled younger people have dropped out of the workforce.”

“Frankly, my continuing to work is all about my wife, to ensure she will have the funds needed to sustain her if I pass away first. We have been married 46 years and my wife has been primarily a stay-at-home mom.” He’s socking away 40% of his salary in his 401(k).

More central to our point, he’s still paying into the Social Security system.

Nor is he alone: Check out the nearby chart from the Labor Department. No matter their education level, the 55-and-over workforce has grown by 5 million since the start of the “Great Recession.” But the under-55 crowd still has 2.5 million jobs to make up. 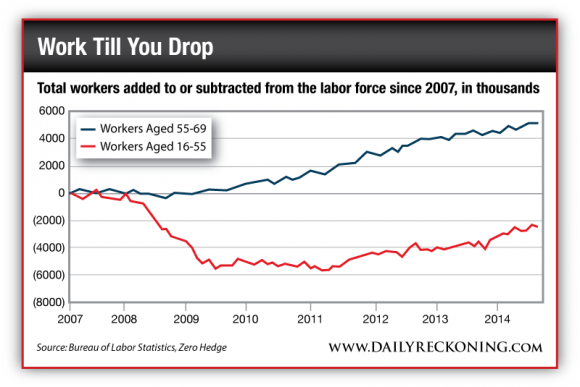 Here’s another Gallup snapshot. Since 1991, the pollsters have asked retirees at what age they retired. They asked the question most recently last April. The average answer was 62 – the highest ever.

“Gallup conducted several polls in the early 1990s and found that the average retirement age was 57 in both 1991 and 1993. From 2002-2012, the average hovered around 60. Over the past two years, the average age at which Americans report retiring has increased to 62.”

“Pay has risen sharply for the highly educated and those people continue to reap rich rewards into old age because these days the educated elderly are more productive than their predecessors… At the other end of the social scale, however, things look grim. Manual work gets harder as people get older, and public pensions look more attractive to those on low wages and the unemployed.”

All the talk about growing life expectancy? It doesn’t apply to the least-educated Americans. In 1990, a white woman who lacked a high school diploma could expect to live to 78. By 2008, only 73.

Those figures come from a study led by longevity researcher S. Jay Olshansky at the University of Illinois-Chicago. The numbers are awful no matter the gender or ethnicity. Again, this is among Americans who didn’t graduate from high school…

“It is an unheard-of drop for a wealthy country in the age of modern medicine. Lack of access to education, medical care, good wages, and healthy food isn’t just leaving the worst-off Americans behind. It’s killing them.”

Professor Olshansky is less certain about Potts’ conclusion. Pressed by The Washington Post for explanations behind the trend, he could only speculate:

“I’m not sure the least educated members of the population are missing out on the advances in medical technology as much as they are adopting harmful behavioral habits that shorten their life. I’ve argued for quite some time that the only control we have over the duration of our lives is to shorten it, and we exercise that control often and with increased frequency (smoking, obesity, etc.).”

Nor is education the only factor correlated with longevity. Men who make more than the median income and reach the age of 65 are living six years longer than they did in the late 1970s. Remember, higher earners are the ones more likely to keep paying into Social Security.

Social Security might make it through the next few decades unscathed. But Medicare and Medicaid are another matter entirely.

Men who make less than the median? They’re living only about 16 months longer.

So there you have it. Well-educated high-earning Americans will work till they drop… and pay into Social Security the whole time. Meanwhile, the least-educated Americans will die off before they can collect much in the way of benefits. Problem solved.

Well, maybe. The Apogee Research Group will have to run the numbers and see whether our hypothesis holds up. Many variables are at work here – including the fact you can collect reduced benefits once you reach “full retirement age” no matter how much you earn on the job.

But as matters stand now, white men with no high school diploma typically live to only 67 – which happens to be full retirement age for anyone born after 1959.

A final thought: Social Security might make it through the next few decades unscathed. But Medicare and Medicaid are another matter entirely.

That’s a doubling every 20 years or so. If you’re 55 now, you need to think about how likely it is health care will take up half the federal budget by the time you’re 75… or whether something in the system will break catastrophically between now and then.

If the medical system descends into chaos and you can’t get the care you need when you need it, your Social Security benefits will be of little comfort, no?

Is the Top In?

Is the Top In?