Here’s Why We Know That Bernanke Knew He Was Wrong About QE, ZIRP, and Trickle Down

In November 2010 Ben Bernanke revealed publicly that boosting the stock market was part of the official economic policy of the US Federal Reserve.

The FOMC intends to buy an additional $600 billion of longer-term Treasury securities by mid-2011 and will continue to reinvest repayments of principal on its holdings of securities, as it has been doing since August.

This approach eased financial conditions in the past and, so far, looks to be effective again. Stock prices rose…

…higher stock prices will boost consumer wealth and help increase confidence, which can also spur spending. Increased spending will lead to higher incomes and profits that, in a virtuous circle, will further support economic expansion.

In short, Bernanke was saying that by buying government securities he knew that the Fed was rigging the stock market to go higher and that that would result in “trickle down” which would spur economic growth. The ultimate goal was to boost incomes and profits in a “virtuous circle,” which would lead to increased employment.

Bernanke said that the reason for the policy was that it worked in the first place in 2009 when the Fed instituted it.

Among the Fed’s responses was a dramatic easing of monetary policy – reducing short-term interest rates nearly to zero. The Fed also purchased more than a trillion dollars’ worth of Treasury securities and U.S.-backed mortgage-related securities, which helped reduce longer-term interest rates, such as those for mortgages and corporate bonds. These steps helped end the economic free fall and set the stage for a resumption of economic growth in mid-2009.

This assertion was virtually universally accepted by Wall Street, the mainstream media, and the public in general. In fact, it has become conomic gospel, a central tenet of Keynesian and monetarist conomic orthodoxy. But it was an assertion, devoid of any proof. It was unproven and unprovable because no other major central bank in the world tried anything different in the wake of the 2008 collapse. They all went to ZIRP and QE in lockstep with the Fed. We simply do not have a basis for concluding that these policies drove the recovery and not other forces.

How do we know that the US economy would not have rebounded without these “extraordinary measures” and that those measures were responsible for the economic rebound? In fact, before the Fed was formed in 1913, there had been numerous economic panics and collapses in the US. In every case, the US economy rebounded strongly WITHOUT extraordinary measures by a central bank.

The US had experimented briefly twice before with central banks, from 1791 to 1811 and from 1816-1836 and junked them. Would it not stand to reason that the US economy, with its natural resilience, would have rebounded without Bernanke’s extraordinary measures? By 2009 there was already an energy technology revolution under way that was beginning to spur a massive oil and gas production boom with wide ripple effects.

The widely accepted gospel that QE and ZIRP were responsible for the initial recovery led to the assumption that they would work to boost the US economy and reduce unemployment going forward. Therefore if the initial “assertion” was correct then the “assumption” about the policy going forward would prove it to be so.

The answer is in this graphic. 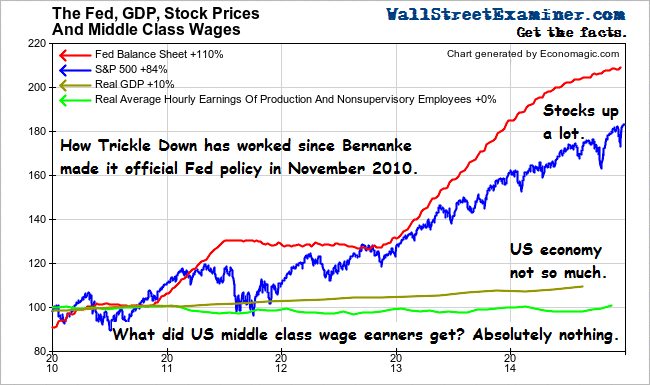 Bernanke was right. The Fed’s asset purchases (Quantitative Easing or QE) did boost stock prices. But after QE was paused in 2010, the annual GDP growth rate in the third quarter of that year hit 3.1%. Once QE resumed and stock prices resumed their rise in Q4 2010, GDP growth actually slowed from 2.7% in Q4 2010, to 1.2% by Q3 of 2011. One could argue from that, that the Fed’s asset purchases actually made the economy grow more slowly.

The Fed then paused QE again and lo and behold, GDP growth began to increase again! It rose to +2.7% by Q3 of 2012. But then the Fed reinstituted QE and yet again, while stock prices continued to bubble higher the economy slowed, dropping to a growth rate below 2% until Q3 of 2013. Growth subsequently rebounded, peaking at 3.1% in Q4 of that year, then settled back again to around 2%-2.7% through Q3 of 2014.

Overall, while stocks rose by approximately 75% between Q3 2010 before Bernanke made targeting stock prices official policy and Q3 of 2014, real GDP increased by a total of 9.2%. During that time, GDP growth was slowest when QE was in force, and fastest when QE was paused, evidence that QE was actually counterproductive in some way.

And how did US workers do? Certainly more of them did get jobs. We have followed that soap opera every month when the BLS has released its employment data. But it is far less reported that since Bernanke officially codified this policy, real wages have not grown one iota. ZIRP and QE have begotten zero wage growth overall. In terms of workers’ income growth, ZIRP has equalled zilch.

The evidence is clear. The assumption that boosting stock prices would boost Americans’ income growth and economic growth is not supported. The assertion that it was the reason for the US economy’s rebound in the first place is not supported.

Our earlier use of this policy approach [November 2008- June 2009] had little effect on the amount of currency in circulation or on other broad measures of the money supply, such as bank deposits. Nor did it result in higher inflation.

One must wonder how Bernanke defines little effect. Perhaps he would agree that 9% GDP growth in 4 years, and zero wage growth, were evidence that the Fed’s asset purchases were of little effect. But on that 84% jump in stock prices, I think that we can all agree, on that Bernanke was right!

Another thing that Bernanke got right was his bet that inflating money supply would not cause “inflation” by which he meant CPI, the prices of consumption goods. QE and ZIRP inflated asset prices but suppressed consumption goods inflation because they promoted excess speculation and malinvestment.

Is Android Becoming the New Windows?