Why the Dollar Will Be King Longer Than You Think

Although we all hate the U.S. dollar, as it continues to hemorrhage wealth, its foothold as the world’s reserve currency isn’t going to disappear overnight.

A Russian gas deal with China won’t change that – as we’ll highlight below.

But before we get to the nitty-gritty, let’s dive into a story that’s right at the tip of your finger, quite literally…

I’m talking about your keyboard.

Old computer or new, tablet or smartphone, you’ll notice that the keyboard configuration is all the same.

It’s the “QWERTY” design – simply named for the order of letters along the top left. 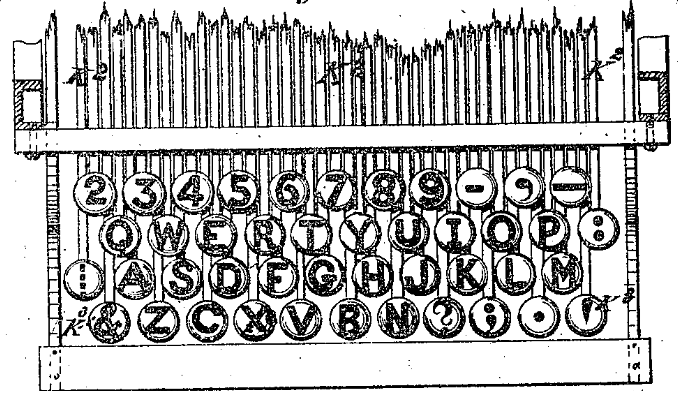 Since 1878 (the date of the patent picture above) or so, if you’ve used a keyboard in the Western world, you’ve had your hands on that ubiquitous letter combination.

And have you heard the history behind the keyboard design?

As the story goes, C. Latham Sholes, the designer of the QWERTY keyboard, developed this particular configuration to prevent the typewriter from jamming. The theory goes that this particular design helped slow down users to the extent that the typing mechanism wouldn’t jam. Sounds good, eh?

However, if you’re up on your urban legend debunking, you know that this story may not be completely accurate.

There’s a completely separate explanation for the QWERTY design that suggests it evolved from Morse code users. The idea there is that this particular configuration gave Morse coders a more efficient platform to translate and type messages coming over the wire.

It’s 2014, so I’ll let the historians battle over which explanation is correct.

In the meantime, there’s something that’s not open for debate…

The QWERTY keyboard was NOT designed for today’s world. Typing mechanisms have been replaced with silicone chips and the need for Morse code has dropped quite significantly over the past 136 years.

Which begs the question: Why are we still using this antiquated design?

It comes down to a simple concept called “path dependence.” Put simply, the decisions we make today are dependent on past circumstances, whether or not they are relevant.

The QWERTY keyboard, gasoline-powered cars, alternating current, DVDs – these are all examples of things we use because of path dependence.

Another example is the world’s reserve currency, the U.S. dollar.

For decades, the U.S. dollar has held the title of the world’s “most reserved” currency. That is, there are more U.S. dollars in foreign national banks than any other currency – it’s something like 60% of the world’s holdings. Here’s a visual… 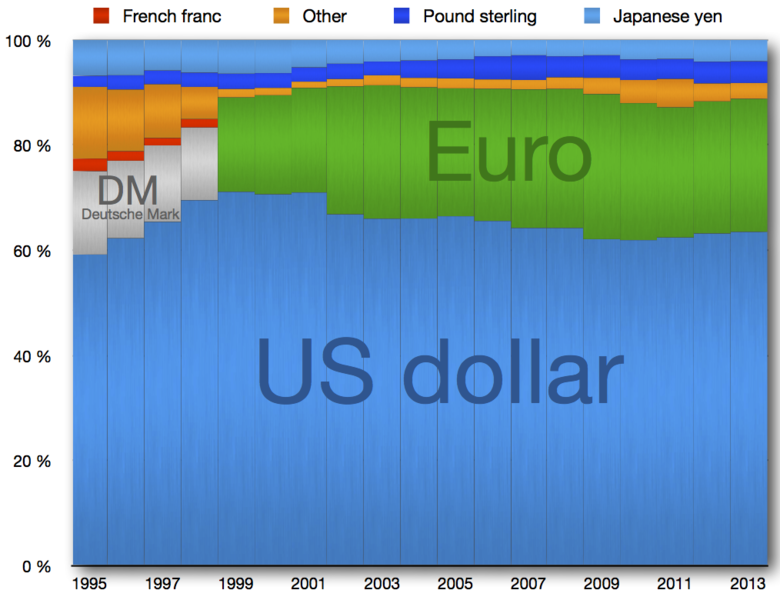 In all, there are millions of U.S. dollars littered around the world. In bank vaults and gypsy cabs alike.

The U.S. dollar is THE medium of exchange.

Regardless of any of the dollar’s flaws – that it’s government controlled, designed to devalue and very often used as a political weapon – the world is path dependent on the U.S. dollar. That’s a simple fact.

Speaking of political weapons, there are plenty of countries around the world that aren’t happy about the role the greenback plays on a global stage. It’s the usual cast of characters: Iran, North Korea, Russia… and they’ve all been targeted with U.S. sanctions.

Sanctions can hurt. But the main takeaway is that these countries are still at the “willing” mercy of the U.S. dollar. That is, they still choose to play by the rules of the global monetary system.

Earlier this month, I was in London with my colleague and editor of Outstanding Investments Byron King. We were getting a feel for the global oil markets and got the chance to hear from a well-connected Russian oilman.

So will Russia start selling crude in nondollar terms?

“There is such a possibility,” says Andrey Bogatenkov, the head of crude trading for Rosneft, Russia’s semi-state-run oil company.

The past four decades have shown that gold prices can swing wildly.

However, the U.S. dollar “is more convenient, more traditional,” he says.

There really wasn’t much of a follow-up to that answer. It’s short. It’s simple. It’s reality.

After all, what good would a non-U.S.-dollar backed currency do for Russia in the meantime?

To answer that question, you’ve got to take another step back. Because to NOT deal in U.S. dollars you’ve got to deal in something else.

Sure, in a recent agreement with China, the Russians could have offered a barter system. But barter gets messy unless both sides want what the other has. It’s much easier to have a medium of exchange.

The deal could have been done in a basket of currencies or rubles/yuan. But that means Russia would need to trust the value of the Chinese yuan. Or any other currency basket. Which gets you back to square one. At that rate, wouldn’t you just deal in greenbacks?

Lastly, the deal could have been hashed out in terms of precious metals. Dealing with gold would be easy if the metal had a consistent value. But the past four decades have shown that gold prices can swing wildly. In other words, what happens if you sign a long-term deal with China today for gold and five years from now the metal is back down to $300 an ounce? That could single-handedly sour the deal.

Add it all up and dealing in anything but U.S. dollars involves a lot of risk. Risk that any sane country wouldn’t take right now. Simply put, there just isn’t a good alternative in today’s global monetary game.

Dethroning the greenback won’t be a quick process. It’s akin to thinking gasoline engines are going to disappear overnight.

There’s simply too much momentum, effort and wealth pushing the ball forward.

And remember, besides being a medium of exchange, the U.S. dollar is a political weapon. And with the U.S. as the No. 1 world power (economically and militarily), there doesn’t seem to be a break in the buck in sight.

So what will break this trend?

My honest answer: Beats me!

It’s the same as the keyboard you’re typing on now. That’s clearly not the most efficient keyboard (considering it was designed to slow typing or for Morse coders), so when is that change going to happen?

[Matt’s note: What do YOU think will be the big catalyst that’ll rock the dollar from the top of the world currency totem pole? Sure, I’ve got my ideas — and a gold-backed Chinese yuan is a good starting point. But what else is out there to dethrone the greenback? I’d love to hear your thoughts. Reply to this post below with your take — I’ll keep an eye out for your response.]

However, not having an end date in sight for the U.S. dollar doesn’t mean we’re all doomed with an ill-fated, Fed-controlled buck.

In fact, there’s a familiar fix for us.

Oddly, it reminds me of a story out of China…

You see, for years, Chinese officials have been urging their citizens to buy gold. The government runs ads on state-run television to stress the benefits and future upside of gold and silver. They’ve also made it easy to buy bullion at local banks.

Why would they do that?

Simple. Because they know that they’re set to devalue their currency. Naturally, when you devalue a currency, it hurts the folks holding it. So by urging citizens to buy gold and silver, they’re simply signaling a way to diversify away from devaluing currency. That way the Chinese are holding gold and other hard assets to counterbalance monetary policy that undermines their national currency.

Back to the U.S., we’ve seen decades of devaluing. Yet you won’t hear that warning from our four-year presidents or distracted congressmen.

But don’t be fooled.

Even though the U.S. dollar looks to be perched as the “most reserved” currency for a while, by any accord, the greenback is a losing investment in the long term. Here are two points for your reference:

Add it all up and not only has the dollar lost value in basic inflation terms, it’s also lost value against other world currencies.

Wrapping everything together, your investment philosophy should be clear. It only makes sense to diversify some of your wealth away from the dollar. And the best way to do that is to invest in things of real value. Keep an eye on gold, silver, oil, gas and other commodities… and the companies that produce ’em.