A Very Real Solution to the World’s Biggest Energy Problems

There was a blockbuster opinion launched by Barclays bank on May 28 that most investors missed, but I’ll bet it has every electric utility in the United States declaring emergency board meetings.

The bank warned investors not to buy the bonds of electrical utilities.

Barclays apparently believes that there is a threat of significant disruption from solar power coming on strong, and that disruption is not priced into utility bonds.

Here’s part of the report:

Electric utilities… are seen by many investors as a sturdy and defensive subset of the investment grade universe.

Over the next few years, however, we believe that a confluence of declining cost trends in distributed solar photovoltaic (PV) power generation and residential-scale power storage is likely to disrupt the status quo.

Based on our analysis, the cost of solar plus storage for residential consumers of electricity is already competitive with the price of utility grid power in Hawaii. Of the other major markets, California could follow in 2017, New York and Arizona in 2018 and many other states soon after.

In the 100-plus year history of the electric utility industry, there has never before been a truly cost-competitive substitute available for grid power.

We believe that solar plus storage could reconfigure the organization and regulation of the electric power business over the coming decade.

We see near-term risks to credit from regulators and utilities falling behind the solar plus storage adoption curve and long-term risks from a comprehensive re-imagining of the role utilities play in providing electric power.

This is yesterday’s news to savvy readers of the FREE Tomorrow in Review e-letter (and for those who’ve read my articles “An Energy Trend Everyone Can Agree On“ and “The End of Energy as We Know It“), but it is a huge confirmation that solar power is likely to change everything.

When a conservative bank like Barclays finally gets around to confirming an obvious truth, you know that money has already moved.

To illustrate what’s happening, allow me to tell you about a recent phone call from a friend who lives in Tempe, Ariz., just outside Phoenix. He jogs several miles in his neighborhood every morning before work.

He called and said:

“Hey, Stephen, every morning when I go for a run in the neighborhood, one or two more houses have guys working on the roof putting in solar panels. The whole neighborhood is going solar. What gives?”

Why are Americans so often the last to recognize trends? Is it because we don’t live in a country like England, home to Barclays, where gasoline “on sale” goes for for $8 a gallon? Must we have a neighbor down the street tell us that not only does he not pay his electric company for power anymore but the utility sends him a check every month? Do we need a colleague at the office to tell us he has never put a gallon of gas in that Chevy Volt he bought last year? That he runs it on sunshine – electricity generated by the solar panels on his roof?

Or do we buy into the myth that there isn’t enough land to put solar panels on to make it the primary power source? Take a gander at this image: 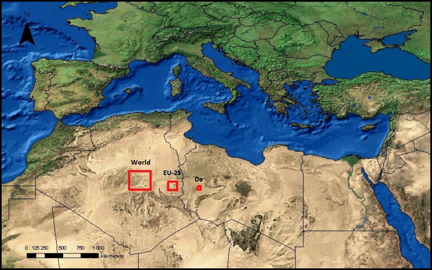 Compiled from data generated by the German Aerospace Center and presented in a Ph.D. thesis written by Nadine May, at the Technical University of Braunschweig.

Concentrated solar is a mystery phrase to most people in the United States, but it’s an important topic in the rest of the world. The concept is based on creating extremely high-output electric generators that run on turbines fired by steam. The steam is generated by using parabolic mirrors to focus the sun’s rays on a tank filled with water.

If you’ve ever played with light from the sun focused by a magnifying glass, you can understand the principle involved.

When I was about 6 years old, I somehow discovered that I could take my grandfather’s magnifying glass that he used to peruse the stock tables in The Wall Street Journal and focus sunlight through it to a spot on the ground. Soon, that spot would erupt into flames. I used to wander in the woods and fields near my house setting every leaf and wood chip I could find on fire, amazed that it worked. I now marvel that I didn’t somehow burn down half the state of Maryland.

Big glass parabolic mirrors are not easy to cast, but because we’re building huge new telescopes around the world at an astounding rate, we’re getting good at it.

In Germany, a kilowatt-hour of electricity costs about 35 cents. In Spain and Austria, it’s about 30 cents. In France and the United Kingdom, it’s about 20 cents. In the United States, we pay anywhere from 5-17 cents a kilowatt-hour (disregarding Hawaii, where power comes from diesel generation), but most of us pay about 13 cents. In Europe, where electricity costs three times what it does here and gasoline is more than double our price, people understand that solar is smart. Europeans also understand that solar will not contribute to the coming age of climate chaos.

Solar is a long play. It will be viable for many years to come because its growth is absolutely necessary to help ameliorate the coming climate crisis and it will continue to fall below grid prices of coal, oil and gas-fired power plants.

Solar is a bandwagon headed for a profitable future. Don’t wait too long to get aboard.