Penalties For Labor And Thrift; Windfalls For Speculation In Land And Financial Assets

There’s no law that says the stock market can’t have a major correction when central banks are pumping money into the system via the Primary Dealers. But in the 12 years since the Fed began publishing detailed data on its operations, and since I began observing those operations closely, the correlations between central bank liquidity flows and market movements have been undeniable. So I continue to feel that there will not be a major correction in stocks until the Fed and its cohorts are forced to change course.

That course change is inevitable, in my view. It is foreordained by the Fed’s history of once or twice a generation serial blunders. The current reactionary policy causes massive malinvestment and economic distortion. The unintended consequences of that are building. They will eventually rear their ugly heads and force a change. That change will be another counter-reaction to the current mistake. It will not correct that mistake, it will only deflect or spread the pain from one subset of victims to others. As Ben Bernanke himself said, “monetary policy has winners and losers.” The only constant seems to be a constantly growing pool of losers and a concentration of winnings in an ever smaller group as well. The Fed has chosen both the winners-bankers, speculators, financial engineers- and the losers-workers, savers, and retirees. 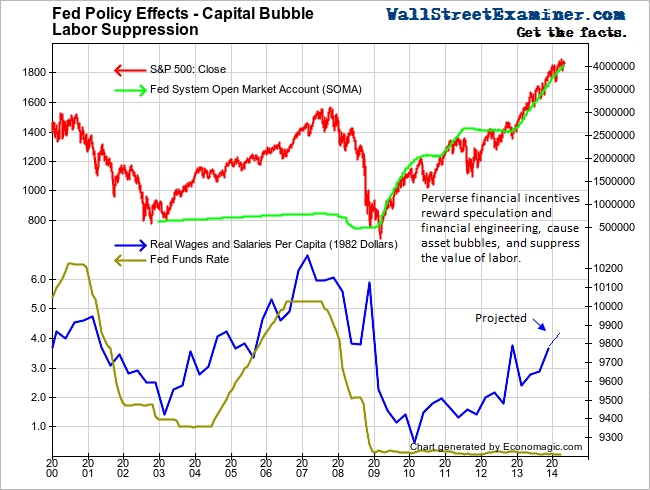 Most ironically, neither the chosen winners nor the losers have deserved their fate. Not only is it bad policy. It is immoral, fostering moral hazard and punishing labor and thrift. A society built on such perverse incentives can not prosper and grow. There will be consequences.

For the time being, the negative consequences of current policy are invisible to the Fed. The most disastrous effect has been the steady, insidious destruction of the US and European middle class as distorted financial incentives result in the destruction of jobs, an ever growing labor surplus, suppression of returns to labor, and consequent destruction of mass purchasing power. Policy favors land and capital, mindless risk and speculation. It penalizes labor and thrift. It promotes outsized returns to speculative capital while labor is decimated. As prices of assets inflate to the stratosphere, gradually, gains to capital will become harder to come by. Then what?

Meanwhile, there’s no inflation because Conomic Theory views only consumer prices and labor rates as subject to inflation. Land and capital don’t “inflate,” they “appreciate.” What bullshit. As long as conomists, central bankers in particular, have an excuse for not seeing the reality of rampant inflation because it is limited to land and capital, they have an excuse to continue a policy that slowly but surely destroys the value of work and pushes the income available to compensate labor ever lower.

Policy makers have been content to ignore or deny the fact that monetary policy has been a cause, if not the cause of the destruction of the middle class. They feel no pressure because of that. However, at some point this trend will begin to materially impact top line economic growth. At the same time, other negative consequences loom from the asset bubbles that policy has spawned. It’s only a matter of time for the central banks to be forced to face the sad consequences of their insanity. At that point, many speculators will get crushed and crony capitalists will suffer a few losses but as usual be protected from complete ruin or from even facing consequences for malfeasance. Worst of all, the steady destruction of the middle class will only accelerate.

Journalists’ Murders Most Likely to Go Unpunished in Iraq