It might not be so apparent now, but it sure will be five years from now when all is evaluated. The big takeaway will be how in the heck did we let the Federal Reserve conduct all of these ad-hoc policy initiatives with some obvious detrimental effects and unintended consequences for financial markets and the US economy?

Where would Markets Go without $75 Billion assistance each month?

Let us start with the most obvious detriment to financial markets the bubble that is the US equities market. Despite what Goldman Sachs says with their double speak to appease wealthy clients who they told to be invested in markets last week and this week said the markets are 10% over-valued, but there is no bubble – there is in fact a bubble in stocks. 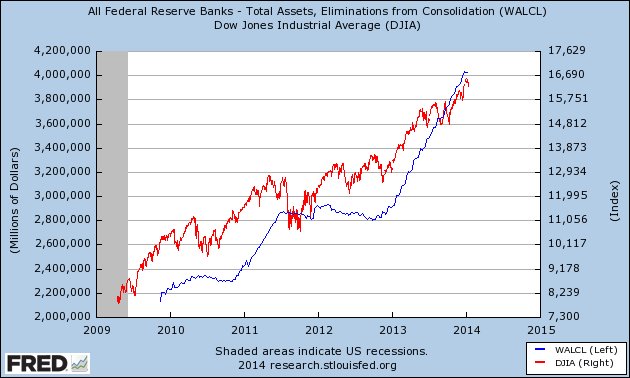 The barometer to use is this: If the Fed stopped cold turkey tomorrow all asset purchases, the Dow would drop 3,500-4,000 points in less than a year (maybe even as little as 6 months), and this is a conservative 25% drop in value just in the short term.

If they were never allowed to intervene in financial markets with asset purchases ever again, eventually markets would fall back to sustainable levels, and all the previous liquidity fueled price appreciation in equities of the last 5 plus years would eventually come out of assets like stocks and real fundamental value would be established.

My guess is that the Dow would fall back to around the 10,000 level on its own merits over the next 3 years with no asset purchases whatsoever by the Federal Reserve, something in the order of a 40% drop in value.

The Bond market is intended for debt to be issued by parties with parties independent of the debt issuers to then determine a fair market price for the risk of holding said debt in the marketplace, and not a social instrument for creating additional liquidity in financial markets which finds its way into the equities, commodities and currency markets via carry trade liquidity driven fund flows. 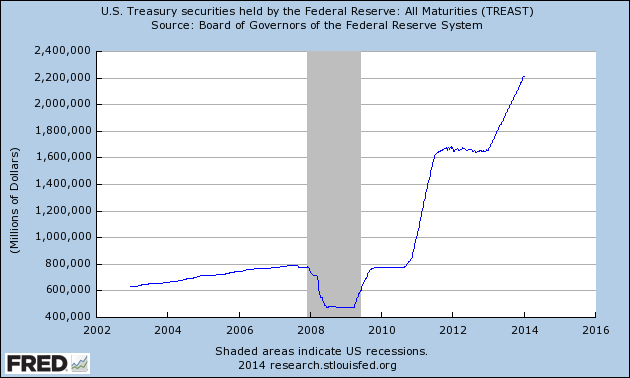 It is supposed to be a risk profiler to keep governments and issuers in check in regard to issuing responsible debt at appropriate times. When debt levels reach unsustainable levels, a healthy and natural bond market prices risk accordingly; thereby incentivizing necessary changes to fiscal and monetary policies.

This mechanism has been greatly distorted by Fed policy, and the long-term consequences are hard to adequately calculate at this point, but they are definitely a cost – the debate is just how high a cost?

The most important point is this the stock market was intended to be a valuation mechanism for public companies based upon how well their business was being run, the economics of their given business paradigm, and the health of the broader macro-economic fundamentals of the market for their goods and services.

It was not built as an instrument for social engineering, manipulation by a government entity, or tool to be used for monetary policy; private companies went public to raise additional financing for their capital structure to grow the business, and the market put a value on the business based upon the future prospects of the given business.

It was never intended as a risk free enterprise. Companies were going to fail, investors were going to lose money; others would flourish, investors would reward these companies with higher stock prices. Fundamentally, the market mechanism would both reward and punish based upon actual operating results of the companies.

This is how a healthy financial market is supposed to work, and we have devolved so far from this healthy and natural market valuation model that there cannot without question be major price discovery distortions in stocks, as in, a bubble in stocks, and the stock market pricing mechanism in general!

Stock buybacks are bad enough, and have distorted operating results considerably with artificially making earnings appear better than they actually are, it provides incentives for other investors to front-run these company buybacks, and they are not being used properly these days by companies, i.e., buying back when shares are cheap relative to company prospects, and selling shares when they are expensive relative to company prospects – again a natural valuation mechanism.

Instead they are being utilized by management to distort prices not because business prospects are so bright, but rather they can borrow cheaply right now ( again thanks to the Fed) and artificially boost their own stock prices and make shareholders happy in their performance of running and managing the company.

Stock buybacks have in a sense become so perverted from their original purpose that they have become payoffs to like and invest in the company, not because the company is performing so well from an operation’s standpoint, but because they are going to buy back their own stock. It becomes both a deterrent for shorting the stock, and sort of ‘mafia bribe’ for shareholders to invest in the company.

Remember, this isn’t even company money, these companies are borrowing to buy back shares! This is fundamentally as screwed up from a management standpoint as one can get, one should borrow money to grow the business and create long-term value, not create balance sheet liabilities for the company solely for the purpose of juicing up the company’s stock price!

This further distorts actual natural market pricing in stocks, there is no actual business evaluation going on currently in financial markets, there are just liquidity injections or price distorting practices.

Moreover, since all these liquidity injection practices are from the long side, it would stand to reason that value is being distorted heavily to the upside, this is about as close to the text book definition of a bubble that one could possibly create, and the Federal Reserve is at the heart of doing just this act!

The stock market I repeat is supposed to be an evaluator of companies, and not a social welfare program to bring about some higher good for economy policy. 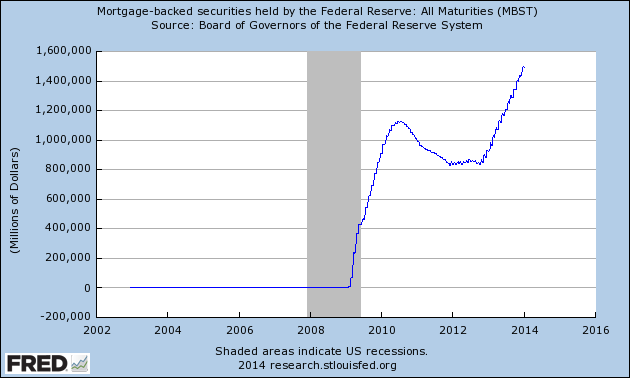 Even if they succeeded in creating a short-term wealth effect for a portion of the population that ended up trickling down to some small extent to the broader economy, the damage to the already shaky financial markets that have crashed three times in fifteen years from a long-term perspective is just a case of the Fed overstepping their bounds and destroying financial markets in the process! On any reasonably weighted Cost/Benefit Analysis this is just too high a price to pay!

Do not Trust Anything an I-Bank says for Public Consumption

Goldman Sachs like many of these investment banks have benefited immensely from the Fed overstepping their bounds in financial markets with asset purchases, they are never going to openly tell the American public whether there is a bubble in stocks. 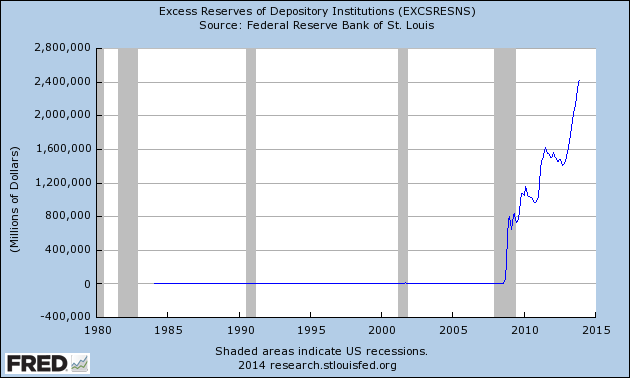 In fact, they have a long history of not even telling their own clients their actual feelings on markets. And given how many times these investment banks have royally screwed up their own financial investments, half of them probably have no clue of the conditions ripe for constituting a bubble in the first place until after the fact!

The real overstepping by the Federal Reserve to actually buying up financial assets has severely distorted the market process, and the long-term damage to what financial markets are supposed to be about from an overall philosophy, fundamental and mechanical methodology standpoint with the associated costs is really incalculable. 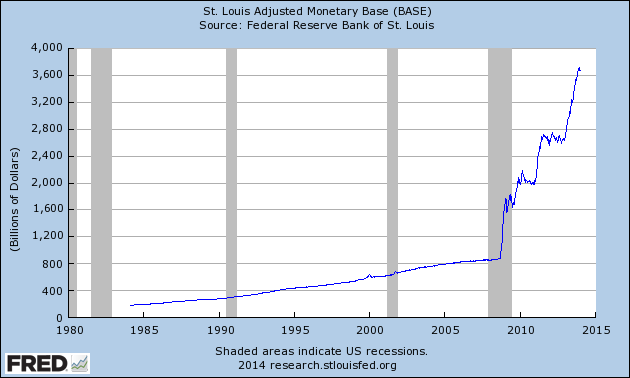 Moreover, that this act has become acceptable fed policy turf, this precedent and the fact that there were no proper checks and balances to restrict and question this intervention is the harmful and malicious fallout that will inevitably become the Bernanke Legacy.

There are many other measures the Fed could entertain instead of the path that Bernanke chose in destroying forever the concept of what constitutes a market mechanism.

Consequently unless the Fed has forever changed what markets actually are, social good mechanisms for government wealth creation, and that means a socialized commitment for eternity, i.e., the market must appreciate 10% every year regardless of broader economics or fundamentals.

Then they have caused more damage by creating a short-term bubble that is unsustainable on its own, and have set the stage for future ad-hoc interventionist asset purchases in markets on equally subjectivist timeframes and justification!

This is the real area where the Fed is guilty of overstepping its bounds. They have forever destroyed financial markets with interventionist policies, and future legislation will have to be created to limit the Fed’s power in this area, and restore financial markets back to their intended purpose.

Yes financial markets are built and intended to fail at times, once they are no longer allowed to fail, they become state tools for policy outcomes. And this reality is a bigger failure in a democratic state, than any short-term and well-meaning goals that result from such policies.