The Washington Post begins to pull the covers back on the real problem of the new 0-care law. It punishes and penalizes good people and doesn’t solve the basic problem of the US medical services delivery system.

They are not eligible for subsidies, but they found a cheaper plan than the one being offered by their insurer. However, there was another problem: It would have required the couple to switch from the doctors they have seen for more than 16 years and travel more than 100 miles from their home to the nearest major hospital center for treatment – in Green Bay, Wis.

For consumers whose health premiums will go up under new law, sticker shock leads to anger – The Washington Post.

This mirrors the complaint I have made repeatedly. For people who are in their late fifties and early sixties who make too much to be eligible for subsidies, insurance premiums, even plans with a $12,600 annual deductible for a couple are simply not affordable. The subsidy cutoff for a married couple is $62,000. Many small business people earn that much or a little more. How many could afford $10,000 a year in insurance premiums for a policy with a $12,600 deductible and 20% co-pays? Perhaps those who are comfortably into a six figure income could, but not many below that would be able.

I’m 63 and my wife is 57. The cheapest quote I saw for a high deductible bronze plan in Palm Beach County, Florida was $745 per month from Humana. No other major insurer was below $1060. That tells me that Humana is offering a low ball teaser rate that won’t be available in 2015.

The law is unfair to older, hard working, self-employed people who must buy their own policies. Those who make more than subsidy eligible incomes but less than enough to be able to afford to pay full freight, are getting screwed. But what else is new? These are the same people who are getting screwed on their savings, either getting zero percent interest, or being forced to speculate in increasingly risky investments.

0-care not only fails to include everyone, creating winners and losers, it fails to solve the basic problem of the US medical services delivery system. The medical industrial complex extracts 18% of US GDP for itself. Compare that to the rest of the developed world. Health care takes approximately 11% of GDP in all other developed nations. The difference between 11% and 18% is the US medical-industrial mafia syndicate skim. It amounts to a 70% private tax on the American people, above the cost of health care in the the rest of the world.

That 70% tax is forced on employers who must insure their employees. Laden with that burden how are these employers to compete with competitors from around the world who do not have to bear this cost? Not only is it 70% higher than the rest of the world, but in the rest of the world, it is the taxpayer’s cost, not the employer’s. In the rest of the world, because the government is the single payer in the market, or because it has busted the medical industrial cartel and tightly regulates the market, the rate payers get a huge discount on the services relative to the US. US employers are penalized in export markets because of this higher cost burden. They cannot compete. So what happens? They move the jobs overseas. American workers lose first because they pay more for medical care, and second, because they then lose their jobs.

Under 0-care, the US Government becomes the strong armed enforcer , the leg breaker, of the medical industrial mafia 70% skim. Here’s the deal, you pay us or you pay us.

Who gets the skim? Hospital chain and insurance executives are paid millions, when government run health care systems around the world do the same jobs with fewer people earning 1/10th of the salaries. Pharmaceutical and medical marketing and advertising in the US cost billions annually. These costs are unheard of anywhere in the world. Hospital procedures in the rest of the world cost 1/10th to 1/20th of what they cost in the US. Why is that? Because of the skim. 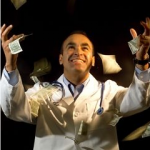 Then there’s the topic that shall not be named, and must be discussed in hushed tones in darkened rooms behind closed doors with drawn shades. It’s about the people in the white coats that we hold in such high regard, who often complain loudly about being hapless victims squeezed by the US system. But excluding our primary care doctors, who are often real heros who are not overpaid, the truth is different. Medical specialists in the US typically earn at least double what the same specialties earn in every other developed country. The US cost problems start with them-the doctors, the medical “care” establishment. Unless that is brought under control, until the triumvirate cartel of doctors, hospitals, and insurers is crushed and the profiteering is ended, it will continue to bleed American society to death.

Because that triumvirate has so deeply embedded itself in the pockets of the politicians, wresting control away from the Syndicate looks unlikely. So far, no one has even tried. The Medical Industrial Syndicate’s propaganda has successfully divided the American people. We will continue to fight with each other rather than fighting the real enemy- the doctors, insurers, hospital executives, and pharmaceutical kingpins and their propaganda minions who form the Medical Industrial Mafia. They are winning. They have successfully enlisted the government to increase their turf and enforce their skim, while keeping the American people enslaved by their evil system. Ultimately, barring a miracle, the system will again exclude more and more people, and the crushing burden it imposes on those who remain to pay the freight will lead to societal collapse.

Note from the author:

The Wall Street Examiner Professional Edition’s unique perspective on the macro liquidity forces that drive markets gives you a trading edge that you’ll find nowhere else, even institutional services costing tens of thousands of dollars yearly. Follow it risk free for thirty days. If, within that time, you don’t find the information useful, I will give you a full refund. It’s that simple. 30 day risk free trial for new subscribers. Click here for more information.