Don’t Get Faked Out by this Week’s Unemployment Claims

The mainstream media this week reported an increase in initial jobless claims to 380,000, an increase of 13,000. This was another huge miss for

the consensus of “conomists”, where the central tendency of expectations was for 359,000 initial claims. The “conomic” establishment continues to prove its worth week in and week out. The question is whether these people are just clueless or willing instruments of the Wall Street distribution machine. I’ll leave that for you to decide. The issue today is whether the number of claims is anything unusual. Does it represent a sign that the economy is weakening?

The media and conomic pundits report claims on a seasonally adjusted basis. That is a fictional number designed to eliminate normal seasonal patterns in the data in order to represent an abstract impressionistic version of a smooth curve for consumption by the masses, which the conomic establishment assumes is too stupid to understand real data. It’s a very strange device because it is a simple matter to compare the current performance of the actual number, in other words “reality” with the reality of the same week in past years.

The Labor Department (DOL) does publish the actual number. This isnot a survey sample, but an actual compilation of the actual weekly claims, which each of the 50 states submits to the DOL. The DOL warns in the weekly release that the current number is an advance number. The fact that the number is revised up every week is simply a matter of the fact that the initial count is not complete. This is not a survey, and not a sample. It is the actual number reported by the 50 states. The number reported next week will be the final number for this week. The DOL is very clear about this. It reports in today’s press release that, “The advance number of actual initial claims under state programs, unadjusted, totaled 381,875 in the week ending April 7, an increase of 62,530 from the previous week. There were 448,029 initial claims in the comparable week in 2011.” Highlighting is mine.

Can it be any clearer? The DOL spoon feeds this data to the media and the conomic establishment, and they completely ignore the facts. Rupert the Hacker’s Wall Street Urinal posts an article claiming to be mystified by the weekly upward revision, when this is a normal part of the process. The number is revised up by 3-4,000 every week. Downward revisions are extremely rare, in fact, they almost never occur. The circumstances would have to involve a larger error in a large state submission. It just doesn’t happen under normal circumstances.

The advance number for actual claims is down by 66,154 or 14.7% since last year. The total number of claims will be revised up next week, so that in the end the difference will be closer to 60,000 or something on the order of 14%. There are many reasons for the drop and you can find negative arguments, such as that fewer workers are eligible to file claims (not true), but the fact is that far fewer people are losing jobs this year. New claims this week as were 0.29% (29 hundredths of a percent) of current total nonfarm payrolls. In the same week last year they were 0.34% (34 hundredths of a percent). So the decline in claims is not a matter of fewer people being eligible. A smaller percentage of the eligible are filing claims. Fewer people are losing jobs.

Wall Street would love to see an excuse for the Fed to do more printing and market propping, so its conomic mouthpieces have ginned up a phony consensus estimate of a phony construct, the seasonally adjusted number, to give the market an excuse to sell off. The players strapped on the dynamite vests and walked into the Eccles Building with their thumbs on the dead man switch, all based on the lie that this week’s number was a bad sign.

Here is a chart of the actual data. 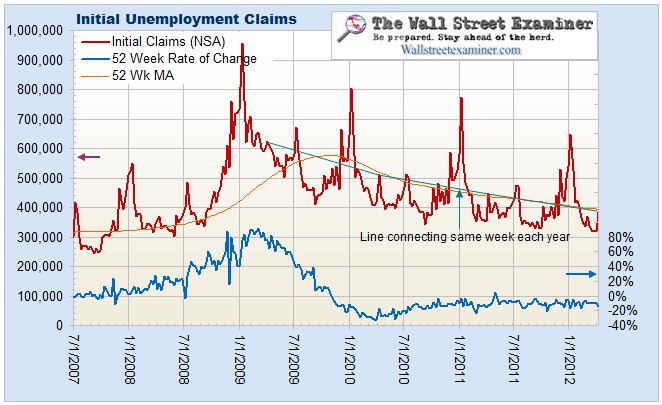 That is a picture of the facts, and the fact is that the current level of claims is right on trend with the trend of the past 2 years. There’s plenty of variance week to week, but the trend has been stable, with weekly year to year change ranging from 5% to 20% since mid 2010. This week’s number is completely consistent with the trend. People can argue with that all they want, but they’d be arguing with the facts. Many people will start with the argument that the DOL is lying every week. That’s a personal choice that everyone is free to make. In my study of a variety of data, I look for logical inconsistencies, and I’m satisfied that the DOL data is reasonably accurate.

The greater problem as I see it, is that people reading the mainstream media and listening to the conomic establishment, are unknowingly being engaged in fiction, and that makes it completely impossible to get at the facts. When you look at what’s real, instead of the seasonally adjusted nonsense and the conomists ridiculous interpretations of it, it’s absolutely clear that there’s no sign, no hint, not a scintilla of evidence, in this data, that the economy is weakening.

Editor’s note: Stay up to date with the machinations of the Fed, Treasury, Primary Dealers and foreign central banks in the US market, along with regular updates of the US housing market, in the Fed Report in the Professional Edition, Money Liquidity, and Real Estate Package. Try it risk free for 30 days. Don’t miss another day. Get the research and analysis you need to understand these critical forces. Be prepared. Stay ahead of the herd.  Click this link and begin your risk free trial NOW!

Other articles by Lee Adler