The percentage of job seekers relocating for new positions in the last half of 2014 rose to its highest level in five years, as ongoing improvements in the employment and housing markets made moving for employment a more palatable option for those in transition.

An average of 15 percent of job-seeking managers and executives moved for new positions over the last two quarters of 2014, according to the new report from global outplacement consultancy Challenger, Gray & Christmas, Inc.  That was up from an average of 11.4 percent in the first two quarters of the year.  In 2013, the relocation rate among job seekers averaged 13 percent.

The latest relocation rate is the highest it has been since the first half of 2009, when an average of 16.3 percent of job seekers moved in the immediate wake of the recession. Said John A. Challenger, chief executive officer of Challenger, Gray & Christmas:

Relocation activity plunged after the first half of 2009 as home values continued to decline, which made it virtually impossible to sell an existing home without taking a significant loss.  The housing market is still recovering in most regions, but the progress made last year, clearly is encouraging more job seekers to expand their searchers geographically.

The Challenger relocation rate is based on a quarterly survey of approximately 1,000 job seekers. Said John A. Challenger:

Relocation is rarely the most desirable option for job seekers.  There is a lot of cost and risk involved.  The collapse in the housing market, which was a primary factor behind the recession, made relocation even more unattractive, as many job seekers were stuck in homes with market values well below what was owed on the mortgage.  Starting in 2013, we saw a rebound in home buying and home prices.  That trend continued in 2014, leading to the upturn in relocation among job seekers.

A recent report from the National Association of Realtors indicates that a majority of metropolitan areas experienced steady year-over-year gains in home prices in the fourth quarter of 2014.  The Association attributed slightly stronger price growth to a decline in housing supply and an uptick in demand fueled by lower interest rates and a stronger job market. 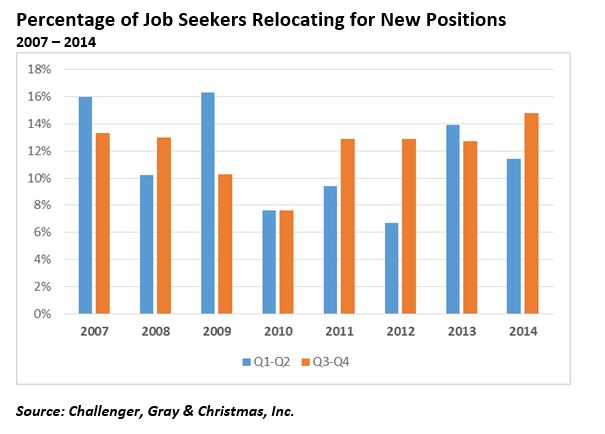 Indeed, the number of cities with low unemployment continues to grow.  In December, there were 158 metropolitan areas with unemployment rates below 5.0 percent.  Only 78 metro areas could say the same, a year earlier. Added Challenger:

At the end of last year, there were more than 70 metropolitan areas with an unemployment rate of 4.0 percent or lower.  That number is growing every month. Employers in these areas are undoubtedly struggling to find workers from the local talent pool.  So, for job seekers who are willing to relocate, the list of cities with good opportunities keeps getting longer.

Even in the strongest economy, the decision to relocate is one that is not made lightly.

You are not only leaving your social safety net of friends and family; you are leaving your professional safety net made from former co-workers, business associates, etc.  These are the people you would turn to in the event of a job loss.  However, this network does not exist in a new city or state.  You have to start building it immediately.

If there are professional associations related to your occupation or industry, it would be a good idea to join the local chapter in your new area.  Charitable and service organizations are another way to expand your social and professional network.  And, do not overlook your new neighbors.  Making new friends and getting to know people in your new area will not only make the transition easier, but these are the people who will help you if your new employment situation does not work out.

Insolvency After The 2005 Bankruptcy Reform