After a record-breaking hiring spree in October, seasonal employment gains in retail fizzled in November and December, with employers adding 23,000 fewer workers than during the same two-month period a year earlier. To make matters worse, it appears that several retailers are now implementing heavy job-cut initiatives to start the year.

The Bureau of Labor Statistics data will be adjusted over the next couple of months, so the final tally may end up exceeding last year’s total. Even if that occurs, though, hiring definitely fell short of the expectations based on the strong hiring numbers we saw in October.

Indeed, holiday hiring got off to a strong start in October, with retail employment growing by 182,000 jobs. That was the largest October employment gain in Labor Department data going back to 1939.

The early hiring gains, coupled with lower-than-expected Black Friday gains, may have tempered hiring activity in November and December. Of course, it is important to keep this year’s hiring numbers in perspective. Yes, holiday job gains were flat from a year earlier, but 2013 hiring was the best we have seen since 2000.

It is also important to understand that the retail employment numbers do not include the robust seasonal hiring that occurred outside of that sector. Between FedEx and UPS alone, nearly 150,000 holiday workers were added to the economy.

If the retail sales and hiring data tell us anything, it’s not that consumers are spending less; it’s that they are spending differently. The retail environment has been evolving ever since the advent of the internet and the changes that occurred slowly and steadily over several years are finally coming into full view.

The challenges that some retailers faced over the holidays are having negative consequences as the new year begins. Since January 1, there have been several significant job-cut announcements, including 2,500 from the closure of 14 Macy’s department stores. JC Penney is closing 40 stores, resulting in 2,250 job losses. Young adult clothing retailer WetSeal announced that it is closing 338 stores and cutting nearly 3,700 jobs.

Undoubtedly, there will be more job cuts in the coming weeks and months. RadioShack, for example, is expected by many to announce more store closures and job cuts, as it continues to struggle. 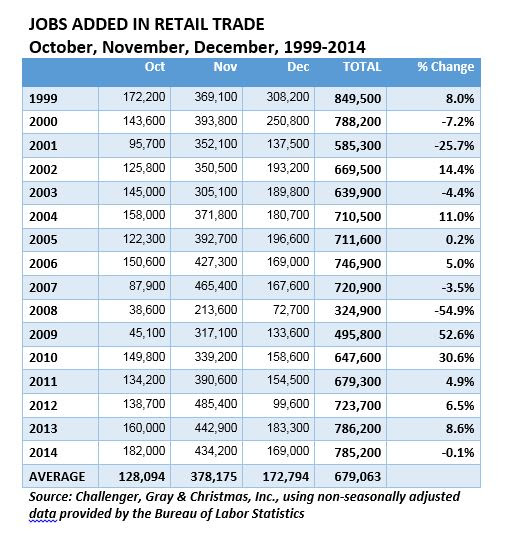 Market Commentary: Markets Close Down After Trading Sideways During The Afternoon Session On Low Volume

Market Commentary: Markets Close Down After Trading Sideways During The Afternoon Session On Low Volume