An improving economy should lower the barriers to starting a business. However, it also means that more companies are hiring. Faced with the choice between entrepreneurship and traditional employment, a new survey indicates that less than 6.0 percent of out-of-work managers and executives were willing to give self-employment a shot in the first half of 2014.

The latest findings on start-up activity are based on a quarterly survey conducted by Challenger, Gray & Christmas, Inc. among job-seeking managers and executives who found employment, started a business, or retired. 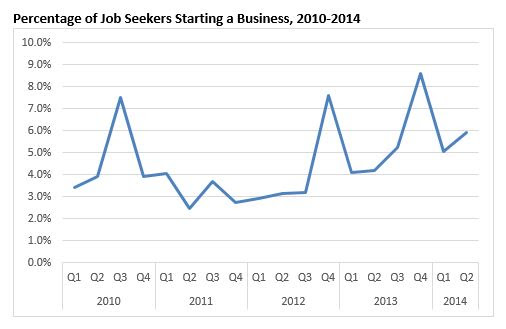 The start-up rate can fluctuate significantly from quarter to quarter. In the fourth quarter of 2013, for example, nearly nine percent of jobless managers and executives started a business. The percentage then dropped by 50 percent in the following quarter. However, the overall start-up rate is trending upward from record lows in 2011, albeit slowly. Even with the increase, though, less than 6 percent of job seekers, on average, are willing to try their hand at entrepreneurship.

We tend to see an increase in job seekers starting businesses in the immediate wake of a downturn, as job openings decrease. Once we start to see job gains, even in the nascent stages, people start moving away from the relative uncertainty of self-employment toward more traditional job opportunities..

As the economy and job market continue to expand and we get closer to full employment, self-employment will begin to rise again, as the confidence factor increases and the risk factor decreases. We may be on the leading edge of that increase. There are, in fact, many areas of the country already near full employment. In these markets, jobs are plentiful, but so are opportunities for prospective entrepreneurs.

As of June, the Bureau of Labor Statistics counted 8.6 million self-employed workers nationwide. That represents about 5.8 percent of the nation’s 147.1 million workers, which is virtually equal to the percentage of job seekers starting businesses in the Challenger survey. Challenger added:

Even in the best economy, starting a business is a significant challenge. We are not talking about starting a factory or a tech firm, which presents an entirely different level of complexity. The vast majority of the entrepreneurs represented in our survey are starting one-person operations as consultants, contract workers, or freelancers. Even at this level, though, the cons to starting a business typically outnumber the pros.

In addition to whatever service or expertise these entrepreneurs are providing to clients and prospective, they must also take on the roles of marketing and business development, accounting and business management. Further stress and anxiety come from the fact that the start-up operation is typically funded by friends and family, personal savings, and/or credit cards; not venture capitalists or investment banks. All of these factors make can make self-employment a daunting endeavor, which is why less than six percent are willing to take this path..

Pay with Promises or Pay as You Go? Lessons from the Death Spiral of Detroit

Pay with Promises or Pay as You Go? Lessons from the Death Spiral of Detroit