After climbing to a 15-month high in May, planned job cuts announced by U.S.-based employers in June plunged 41 percent to 31,434, the lowest one-month total so far this year. Through the first half of 2014, the pace of job cutting is down 5.0 percent from a year ago

June job cuts were 20 percent lower than the same month a year ago, when employers announced 39,372 job cuts. Job cuts during the month dropped sharply from May, when planned layoffs reached 52,961, which was the largest monthly total since February 2013, when 55,356 job cuts were announced.

New Jersey-based employers were hit particularly hard by June layoff activity, accounting for three of the top four job-cut announcements during the month. The closures of two Atlantic City casinos and a Westhampton-based transportation firm resulted in nearly 7,000 job cuts.

The casino closures were the primary reason the entertainment and leisure industry was the top job-cutting sector of the month. In all, these firms announced layoffs totaling 6,005 in June. For the year, employers in the sector have announced 13,700 job cuts, which is up 50 percent from 9,145 at the same point in 2013. 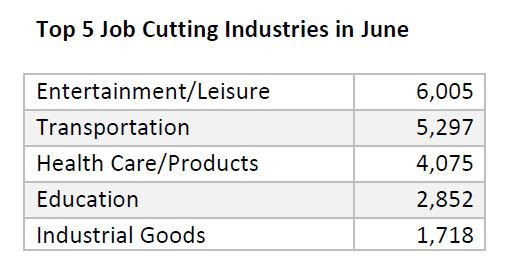 The heaviest downsizing through the first half of the year occurred in the computer industry, where employers announced plans to cut 30,002 workers from their payrolls. Retailers have also seen heavy job cuts, having announced 26,863 planned layoffs through June. Said John A. Challenger, chief executive officer of Challenger, Gray & Christmas:

The holidays were not kind to several retailers who answered with heavy layoffs in the first quarter. We saw large-scale job-cut announcements from Macy’s, Best Buy, J.C. Penney, and Sears to start out the year. Meanwhile, one of the largest job cuts of the year so far resulted from the bankruptcy of Coldwater Creek, which resulted in 5,500 layoffs.

“The same arctic weather that sapped momentum out of the entire economy in the first quarter undoubtedly contributed to retailers’ misfortune during the same stretch. The situation appears to have improved along with the weather, as layoffs by retailers declined by more than half in the second quarter.

It is also important to understand that not all of these job cuts are related to the economy. Retailers, in particular, are vulnerable to constantly changing trends in fashion, technology, and consumer demand. Retail, in general, continues to grow. But it is an increasingly competitive space where we could see more failures than successes.

The same could be said for the tech sector. Obviously, this is an area with a huge potential for growth. After all, we are more and more reliant on computers, software and other technology every day. However, change in this industry occurs rapidly, and some of the larger, less nimble companies are sometimes forced to alter their course and that can be painful. This was exemplified by large layoff announcements in the first half of this year by Hewlett-Packard and Intel.