Job cut announcements by U.S.-based firms were up 17 percent in April, as employers in retail and financial services continued to shed workers in a challenging business environment.

Employers announced plans to shed 40,298 workers from their payrolls in April. That was up from 34,399 in March and 6.0 percent higher than the 38,121 job cuts recorded in the same month a year ago. So far in 2014, Challenger has tracked 161,639 announced job cuts, 12 percent fewer than the 183,162 planned layoffs in the first four months of 2013. Said John A. Challenger, chief executive officer of Challenger, Gray & Christmas: [all quotes in this post from John A. Challenger]

Despite the April increase, the pace of downsizing remains relatively low. We just saw the lowest first-quarter total in 19 years and the year-to-date monthly average of 40,410 is the lowest since 1997.

However, while the economy still has a lot of room for growth, it is unlikely that monthly layoffs will experience a precipitous decline. Even during the economic boom of the late 1990s, employers still averaged about 550,000 announced layoffs annually.

One area that has continued to struggle in the wake of the recession is retail, which announced an industry-leading 6,993 job cuts in April. To date, retailers have announced 25,224 job cuts, which is only slightly lower than the 31,297 retail job cuts reported in the first four months of 2013. 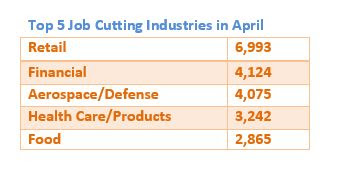 Among the retailers announcing cuts in April was Coldwater Creek, which never found its footing after the recession and was forced to declare bankruptcy and shutter 350 stores. Like other retailers, it struggled amid a changing retail landscape, where more and more competition is coming from the internet

Rising job cuts in the tech sector is not necessarily a harbinger of a weakening economy. Change occurs so rapidly in this sector that employers have become very adept at shift their workforce levels to the latest trends. In many cases, these firms are simultaneously hiring in one area while cutting staff in another.

Step by Step: Evaluating the Value of Single and Multi-Step Income Statements

Step by Step: Evaluating the Value of Single and Multi-Step Income Statements