Doom in the News

Warning you about the end of the world (doomster scenario #137)

Summary: It’s time for yet another warning of doom. As usual, based on a flimsy foundation of data and analysis. As usual, the news media eats it up. And the public, mostly on the Left, applaud. No matter how often these predictions prove false, the Left uncritically believes the next. Too bad for them that the public no longer cares.

(1) The trumpets of doom sound again

It’s based on this paper: “Human and Nature Dynamics (HANDY): Modeling Inequality and Use of Resources in the Collapse or Sustainability of Societies“, Safa Motesharrei, Jorge Rivas, & Eugenia Kalnay, Ecological Economics, in press.

There are widespread concerns that current trends in resource-use are unsustainable, but possibilities of overshoot/collapse remain controversial. Collapses have occurred frequently in history, often followed by centuries of economic, intellectual, and population decline. Many diff erent natural and social phenomena have been invoked to explain speci fic collapses, but a general explanation remains elusive.

In this paper, we build a human population dynamics model by adding accumulated wealth and economic inequality to a predator-prey model of humans and nature. The model structure, and simulated scenarios that off er significant implications, are explained. Four equations describe the evolution of Elites, Commoners, Nature, and Wealth. The model shows Economic Strati cation or Ecological Strain can independently lead to collapse, in agreement with the historical record.

The measure “Carrying Capacity” is developed and its estimation is shown to be a practical means for early detection of a collapse. Mechanisms leading to two types of collapses are discussed. The new dynamics of this model can also reproduce the irreversible collapses found in history. Collapse can be avoided, and population can reach a steady state at maximum carrying capacity if the rate of depletion of nature is reduced to a sustainable level and if resources are distributed equitably.

Nafeez Ahmed and the media ech0-chamber focused on the “NASA-sponsored” aspect to give the study undeserved emphasis. The push-back was fast: “NASA Statement on Sustainability Study“, press release from NASA, 20 March 2014 – Excerpt (red emphasis added):

“{the paper} was not solicited, directed or reviewed by NASA. It is an independent study by the university researchers utilizing research tools developed for a separate NASA activity. As is the case with all independent research, the views and conclusions in the paper are those of the authors alone. NASA does not endorse the paper or its conclusions.”

The National Socio-Environmental Synthesis Center (SESYNC), at which one of the study’s authors works, elaborates further on NASA’s role (red emphasis added):

Motesharrei received minor support from NASA to develop a coupled earth system model. Some of this funding was spent on the mathematical development of the HANDY model {basis of the paper}.

(3) What’s the fascination with doom?

It’s entertainment, part of the long tradition of fairy tales, science fiction disaster films, and horror flicks. It’s a legitimate concern. It’s a political tool, source of scary stories to influence the public to adopt certain pubic policy measures. But after 50 years of overuse, starting with the scares of the 1970s – famine, overpopulation, and global cooling (all still MIA) the public has become indifferent to new screams of warning. Example:

“Moses Versus Joseph: A Biblical Lesson in Communication about Climate Change“, Cliff Mass (Prof of Atmospheric Sciences, U Washington), 16 March 2014 – “I noticed something else: the audience’s eyes glazed over as the endless list of disasters were described.”

Posts about the Left’s crusade about climate change:

The discussion about this study nicely demonstrates our inability to clearly and coolly evaluate scientific research.

(a) Keith Kloor, at the Discover magazine blog, writes about the study and the news media coverage:

(b) Nafeez Ahmed’s rebuttal has the funniest sub-title of the year: “Did Nasa fund ‘civilisation collapse’ study, or not?“, blog of the Guardian, 21 March 2014 – “Journalistic standards won’t be upheld by attempting to discredit science we don’t like.” He doesn’t notice that he (and his fellow climate activists) routinely “discredit science {they} don’t like.” It’s their primary mode of rebuttal, with personal smears as a close second.

Most of the articles about the study are accurate, but are none the less chaff in the public debate. They nicely illustrate why so many vital issues turning on science have collapsed into cacophony.

As a profession, science requires commitment and focus – devoting years, decades, or a lifetime in pursuit of data and theory which might prove a dead-end. Public policy requires understanding uncertainty and the limits to what we know. Journalists are bridges between these two spheres, a difficult task. Unfortunately exaggerating the certainty of studies – with which scientists often cooperate – makes better copy.

The following comments are from experts, but as usual neither scientist admits that this field lies on the edge of science, a poorly understood and immature topic. That is the vital context for laypeople to know, but are seldom told.

(a) Keith Kloor, journalist at the Discover magazine blog, gets some brief expert comments on the paper. He checks with one of the top social scientists working in this field: Joseph Tainter (Professor of Environment & Society, Utah State U; his Wikipedia entry), author of The Collapse of Complex Societies (1988).

Overall I found the paper to be trivial and deeply flawed. It is amazing that anyone would take it seriously, but clearly some people do (at least in the media).

You are correct that they cite my work a lot, but they seem not to have been influenced by it, or even to understand it. I suspect they were strongly influenced by the work of Peter Turchin – for which, please see the attached (short) review.

Tainter provides more detail in an email to Kloor:

It is interesting how collapse theories mirror broader societal issues. During the Cold War, we had theories ascribing collapse to elite mismanagement, class conflict, and peasant revolts. As global warming became a public issue, scholars of the past began to discover that ancient societies collapsed due to climate change. As we have become concerned about sustainability and resource use today, we have learned that ancient societies collapsed due to depletion of critical resources, such as soil and forests. Now that inequality and “the 1%” are topics of public discourse, we have this paper focusing largely on elite resource consumption.

Models depend on the assumptions that go into them. Thus the first four pages of the paper are the part most worth discussing.

The paper has many flaws. The first is that “collapse” is not defined, and the examples given conflate different processes and outcomes. Thus the authors are not even clear what topic they are addressing.

Collapses have occurred among both hierarchical and non-hierarchical societies, and the authors even discuss the latter (although without understanding the implications for their thesis). Thus, although the authors purport to offer a universal model of collapse (involving elite consumption), their own discussion undercuts that argument.

Contrary to the authors’ unsubstantiated assertion, there is no evidence that elite consumption caused ancient societies to collapse. The authors simply have no empirical basis for this assumption, and that point alone undercuts most of the paper.

The authors assert that there is a “two-class structure of modern society,” and indeed their analysis depends on this being the case. The basis for this assertion comes from two papers published in obscure physics journals. That’s right, this assertion does not come from peer-review social science. It comes from journals that have no expertise in this topic, and whose audience is unqualified to evaluate the assertion critically.

In other words, there is no empirical or substantiated theoretical basis for this paper’s model.

In modeling, once one has established one’s assumptions and parameters, it is a simple matter to program the mathematics that will give the outcome one wants or expects. For this reason, models must be critically evaluated. Unfortunately, most readers are unable to evaluate a model’s assumptions. Instead, readers are impressed by equations and colored graphs, and assume thereby that a model mimics real processes and outcomes. That seems to be the case with this paper, and it represents the worst in modeling.

The archaeological record is quite unambiguous: every prior society in every part of the world has ultimately been eclipsed. Human communities are kinds of machines – machines for social life – and just like any machine they fall apart and are discarded. However, civilisational collapse is actually quite rare.

Civilisational collapse typically involves the disappearance of entire ways of life, systems of thought, cultural values and worldviews. These generally do not disappear due to convulsive periods of collapse but rather fade over time as alternative systems of belief take their place.

However, although civilisational collapse is rare, political collapse is constant. Kingdoms, principalities, republics and states come and go and typically their downfall is violent and convulsive. The warnings in the recent study should carry significant warnings to current global political leaders: address the threats posed by climate change and economic inequality or face the rapid undoing of the current political order. The archaeological record suggests that while civilization will likely endure, politics as we know it, odds are, will not.

(a) Equally fantastic but opposite scenarios:

(b) Posts about doomsters:

(a) The Yellowstone super-volcano eruption of 2021

By Mister Ed Fan, at DeviantArt. For more information see About our certain doom from the Yellowstone supervolcano, 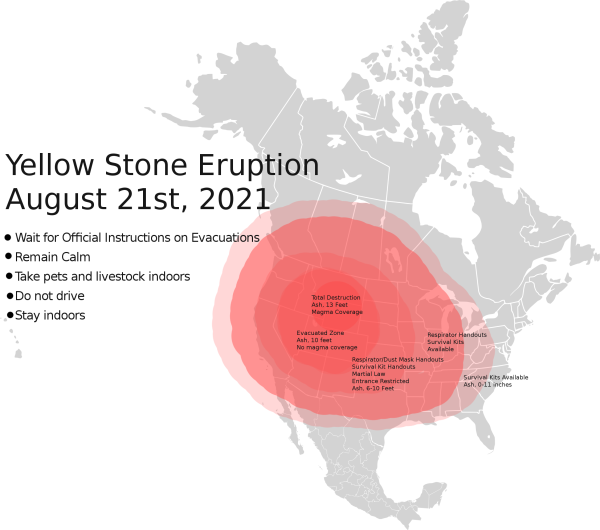 By Mister Ed Fan, at DeviantArt

(b) Impact of an asteroid or comet

Putting the F Back in Fatherland