US businesses want to hire millions of workers. The only problem is that those businesses don’t want to pay those workers enough to entice them off their parents’ sofas. So the jobs listings grow, and mainstream media clowns like Joe (@TheStaleWort) Weisenthal go crazy over the numbers.

This Bloomberg cartoon shows how far US financial “journalism” has sunken. Considering how bad it was to begin with, it is quite an accomplishment to get even worse. In addition to the Bloomberg headline being a lie, the one line “story” missed the most important fact in the data. 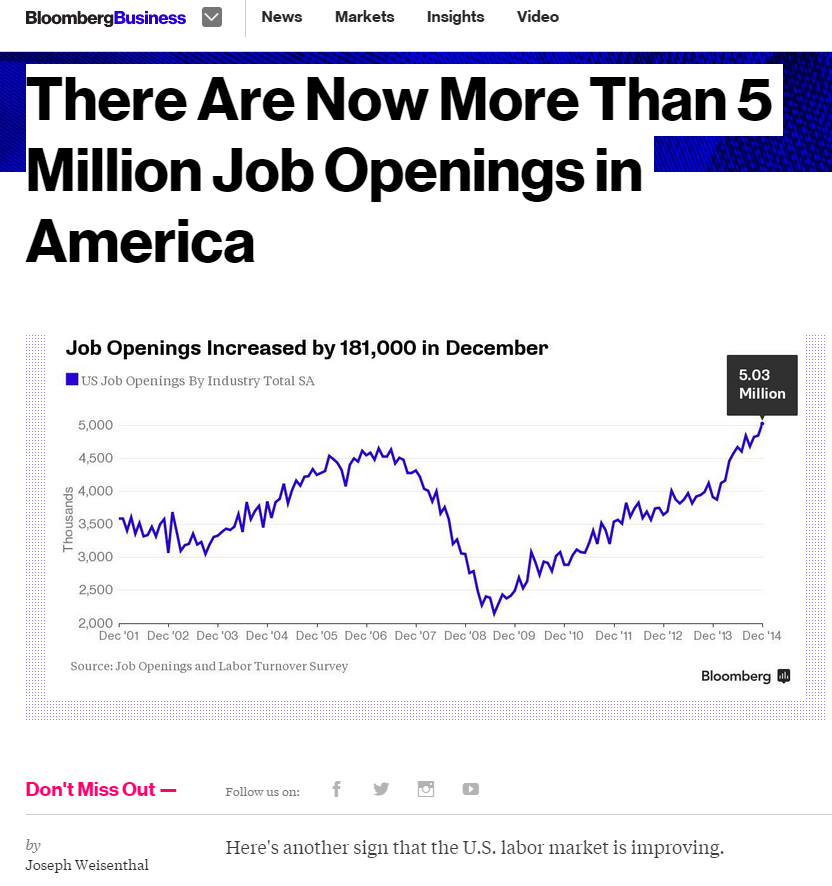 Yes, job openings surged. They rose by 25,000 at the end of December to 4.43 million on an actual, not seasonally adjusted basis. That is 30.7% higher than the level of December 2013 which is an enormous gain. As Decembers go, the gain of 25,000 jobs from the end of November was also big. The November-December change is usually negative. The 10 year average for December is a decline of 75,000 jobs.

The chart doesn’t lie. The increase in job openings is accelerating.

Exactly where are those job openings? Except for State and Local Goverment jobs, they’re mostly in the low pay service sectors. 61% of the job openings were in the following sectors, three of which pay the lowest wages in the US economy.

These sectors also had the largest year to year percentage gains. The next largest sector was Manufacturing at 6% of the total. No other employment group had more than 4% of the jobs total.

Maybe that’s why new hires in December hit an all time record low as a percentage of job openings since the JOLTS survey began in 2000. 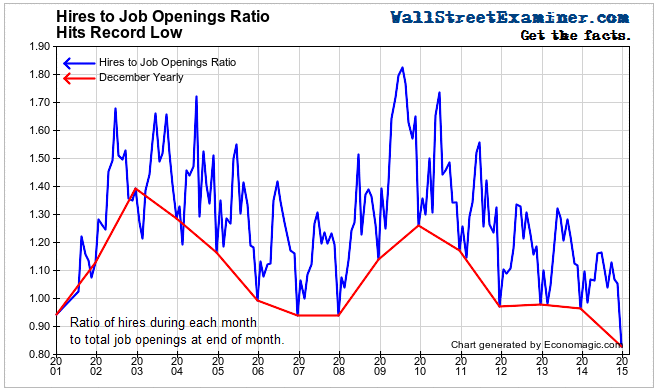 Rate of Hires Drops To Record Low- Click to enlarge

Let’s delve into how Bloomberg reported the story. First, there weren’t 5 million job openings. That number is made up via the spurious method of extrapolating annualized fictitious monthly seasonally adjusted data. If the monthly data is off, which it always is, just multiply the error by 12. That way you can make the annualized number even more spectacular.

The number of actual job openings was 4.43 million per the BLS. It was the biggest December on record so there really was no need to exaggerate. Weisenthal just brianwilliamsized it a little.

CORRECTION- The WSJ’s Josh Zumbrun has correctly pointed out that Professional and Business Services are not low wage jobs. In fact, the median in that sector is above the mid range for all jobs. However a few very highly paid professionals in that field skew the average. The BLS says that 83% of the workers in that field are production and nonsupervisory. The average weekly earnings for this group in December was $862. The average for all private employees was $848. Since this is the average, it’s reasonable to infer that roughly half the jobs in the group are at or below the average, but not in the same range as the other 3 private sector categories on the list.

Infographic Of The Day: Vegan And Gluten Free Alternatives