The Real Force Behind US Economic “Growth,” Such As It Is, Is Not The Fed

As the stock market has scooted off into Fed driven bubble territory over the past year, industrial production, on the surface at least, appears to be expanding quite nicely. After briefly going negative in mid 2013, the annual growth rate turned upward and has been accelerating, reaching 4.3% in July. This measure is by units of production, therefore no inflation adjustment is required. It’s a pretty impressive performance for the nation’s factories, mines, and utilities. Can the Fed take credit for that growth, or was there something else that drove it?

The answer is that Fed is not only not responsible for that growth, it is responsible for once again putting us in grave danger. The financial engineering bubble the Fed has enabled does not create real wealth, it only transfers it from one class of economic actors to another. In this case, it has gone from a dwindling middle class to the bankers and corporate plutocrats who control the levers of power. That’s a story which I have covered in these pages for years. You know the details.

The industrial production data provides some real insight into the drivers of real growth in the US economy, such that it exists.

Media pundits and the Wall Street establishment like to back out defense and aviation to arrive at a core figure for industrial production, but as Alan Tonelson pointed out, while extremely volatile, their contributions to the total index are relatively small and have little impact on the trend over time. I like to deconstruct the index differently to get a better idea of how the US economy is really doing.

In fact, take away energy and the rest of the US economy isn’t doing that well. In some ways, it’s not growing at all. What growth there is appears entirely due to the energy boom and its ripple effects. Thank goodness for that boom and the technological changes that led to it. Environmentalists may feel differently, but without that growth in energy the US economy would be in even deeper trouble than it is.

The energy boom deserves far more credit for what growth there is in the US than does the Fed, but you will never hear the Fed’s cheerleaders acknowledge that. It’s also the most likely reason that the US is doing better economically than Europe and Japan. Both the BoJ and ECB have tried massively stimulative monetary policies over the past 5 years with little impact. Europe and Japan have been swinging between no growth and contraction for the entire time since 2009 while the US has seen modest expansion.

Here are a few charts that shed some light on the facts. First, manufacturing, now growing at a rate in excess of 4% has finally crawled back to the peak levels of 2007, just before the US economy collapsed. However, the June seasonal peak was below the level of 2007′s peak. While manufacturing is back to where it was in 2007, it’s no stronger, and the US and the rest of the world are a lot bigger now than they were 7 years ago. Relative to population growth, US manufacturing and the jobs that go with it, are still lagging.

Electric Power generation is necessary not only for industrial and commercial activities, but for our regular needs and wants of daily living. There are few things which we do at work or at home for which electricity does not play a role. Consequently, electric power generation had been in a secular growth trend from the inception of the measure in 1974 until 2008. But then that all come to a standstill. We use no more electric power today than we did in 2008, in spite of the US population being about 6% greater now than then. The question is whether the flattening of this trend is a matter of greater technological energy efficiency, or forced conservation and reduced demand due to the pressure on real household incomes. It’s probably a little of both, but the trend suggests that across the entire wealth spectrum the experience of economic growth has been extremely limited. We have seen lots of income data supporting that conclusion. Only those near the top of the curve have experienced “growth.”

The real driver of whatever growth we have seen in the US in the past 6 years has been in getting oil and gas out of the ground and into the economic stream. Since 2009, energy production has risen by over 50%. Oil and gas extraction has been growing so fast that its share of industrial production has risen from 26% in 2006 to nearly 30% today. 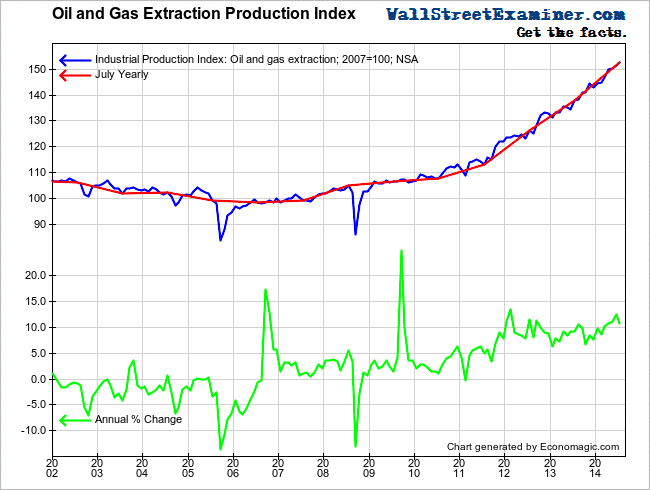 At some point this trend will begin to slow. I don’t pretend to know when that will be, but when it does, the US economy is likely to look a lot less rosy than it appears today. Non Energy industrial production is just about back to 2007 levels after a strong growth spurt in the last 12 months. Even though direct energy production is removed from the index shown below, it’s likely that the ripple effects of the energy production boom played a role in this growth.

Does this lack of growth since 2007 justify the stock market being 28% higher today than it was in 2007. When the Fed and its partner major central banks, the BoJ and ECB finally pull the punchbowl will prices come back to earth with a thud? I think the answer to that is “yes,” but for those of us in the markets, timing is the issue, which I cover in the Professional Edition.

What about the growth in energy capacity, that is, the construction of all those oil and gas wells that are required to produce that energy? What impact has that had since 2007?

Ask yourself where the US economy would be without this enormous investment and without the tremendous annual increases in actual production.

While the Fed is behind the enormous ramp in stock prices since 2008, the Fed’s cheerleaders give it far more credit than is deserved for the economic “recovery” that has left too many Americans behind. That “recovery,” like so many booms in history, is largely due to an accident of technology, an innovation so great that it has driven economic growth in the US for the past 5 years. We know this because growth in those parts of the world lacking in oil and gas reserves, or where for other reasons this technology has not been widely adopted, have not grown, while the US has. Likewise, in those areas of the US where there are oil and gas resources, growth has been far faster than in areas where there is not. A prime example… without oil and gas, there would be no low tax economic miracle in Texas.

This lucky accident of technological history is completely independent of the Fed’s policies of QE and ZIRP. Those policies were not necessary for this boom in energy. It was going to happen regardless of the level of interest rates or the mountains of cash the Fed pumped through Primary Dealer trading accounts. Historically normal interest rates and money creation would not have slowed this boom one iota.

Conversely, had the Fed never instituted ZIRP and QE, the massive financial engineering asset bubble currently putting the world at renewed risk never would have happened. With the boom in energy rippling out into the US economy, this bubble and its high frequency trading, stock option buybacks, and the immoral crushing of the nesteggs of America’s elderly, was wholly unnecessary. The dislocations that will result when the world’s central banks finally relent from these policies will extract another terrible price, a price that did not need to be paid. It is only a matter of time.

We can already guess the excuse which the Fed’s cheerleaders and apologists will have then. It will be that the Fed did not do enough.

These policy makers, these economists, these media pundits, simply refuse to consider the facts. They dare not question their models and their false heroes. They are incapable of admitting error. They are incapable of embarrassment. They have no conscience and no shame. These are the qualities of our economic policy makers and those in the self congratulatory media echo chamber who aspire to be like them. It is why we will simply go on careening from one crisis to the next from generation to generation.

As individuals and money managers with consciences all we can do is protect ourselves from those crises as best we can. We must arm ourselves with the facts and act upon them when the times require.