The Mystery of Bottomless Reserves

When I first went to work for ConocoPhillips (NYSE: COP), I worked on technology development. I had spent the previous seven years working in the chemical industry, and didn’t know all that much about the oil industry. My first job at ConocoPhillips was helping with a gas-to-liquids process in which we took natural gas and converted it into diesel, in a process very similar to that in Shell’s (NYSE: RDS-A) Pearl GTL plant in Qatar.

I still didn’t know a lot about the art and science of oil production, but during my first year of work there I noticed something that seemed peculiar. Looking through the company’s annual report, I noticed that if I divided Conoco’s proved oil reserves by its production rate (the R/P ratio), I came up with a value of only 10 years or so. This alarmed me a bit, so I asked some of my coworkers if this was normal. Nobody seemed to know for sure.

If I look at the situation at ConocoPhillips today — more than a decade after I first posed that question — I read in the 2013 annual report that the company had 8.9 billion barrels of oil equivalent (BOE) and its production rate was 1.5 million BOE/day. Thus, the R/P has grown to 16.3 years. In fact, according to the 2014 BP Statistical Review of World Energy, the R/P ratio for the U.S. as a whole was 12.1 years at the end of 2013. Twenty years ago, the R/P ratio in the U.S. was only 9.6 years.

Think about the implications of that. In 1993 the U.S. had enough proved reserves to produce at the then-current rate for 9.6 years. Not only did we continue to produce for 9.6 years, today’s production rate is 17% higher than it was in 1993, and yet we now have enough oil to produce for 12.1 years at current rates. And the world as a whole has a R/P ratio of 53 years. 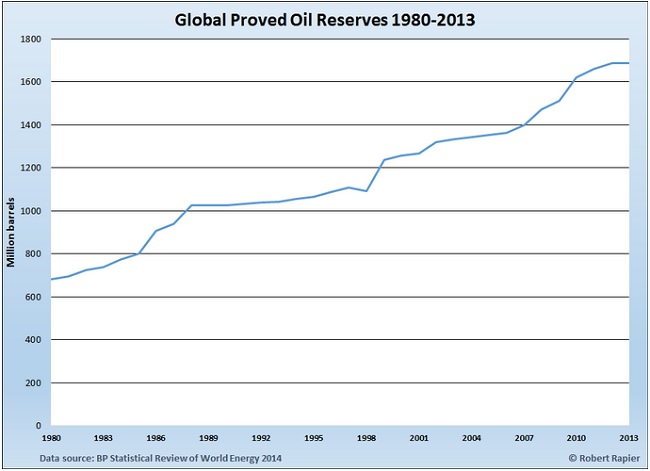 How did this happen?

It basically comes down to three things. The first is that obviously more oil was found. For example, in 1965 Alaska’s Prudhoe Bay and its 25 billion barrels of oil had yet to be discovered.

The second is that technologies for recovering oil from existing fields improved. Shell geophysicist M. King Hubbert is often credited with correctly predicting in a 1956 paper that U.S. oil production would peak in 1970. What many don’t realize is that this was a secondary prediction. He actually predicted that U.S. oil production would peak in 1965, and qualified that prediction by stating that the peak could happen as late as 1970. But he was skeptical about the latter date because he said that would require the U.S. to find additional oil fields equivalent to “eight East Texas oil fields.” But those oil fields continue to be “found” by applying new recovery technologies to producing fields and increasing the recovery percentage.

The third factor comes down to the way proved reserves are defined. As I discussed in more detail in a recent issue of The Energy Letter, the U.S. Securities and Exchange Commission (SEC) requires that in order for reserves to be counted as “proved,” the oil must be “estimated with reasonable certainty, from the analysis of geologic and engineering data, to be recoverable from well established or known reservoirs with the existing equipment and under the existing operating conditions.” Undeveloped reserves can also be booked as proved provided the previous criteria are met and there is a development plan for drilling within five years.

These three factors explain why oil production has far outstripped what expectations might have been given estimates of proved reserves in the past. Today’s R/P ratio in the U.S. of 12.1 years is really a reflection of the oil development that is in the pipeline at current prices. In recent years, U.S. reserves have gone up as higher prices made shale oil economical to produce, and resulted in lots of shale oil reserves being added to the proved reserves tally.

The reason that the world as a whole has a much larger R/P ratio is that other countries don’t have to abide by SEC rules in accounting for their proved reserves. As a result, there is a lot more uncertainty about the global reserves figure.

But it is safe to say that we will be using oil for decades to come, and when we do move on to something else there will still be plenty of crude left in the ground.