Much like its northern neighbor, Mexico is not water scarce when viewed as a whole. But unequal water distribution has led to significant water stress in several parts of the country. Supply has been further strained by poor infrastructure, pollution and overuse — partly attributable to inefficient management and a growing population. Still, Mexico is positioned to experience significant economic growth because of its proximity to the United States and the likely expansion of its manufacturing sector as the country’s population increases.

Recent changes to the constitution to encourage much-needed investment in the country’s energy sector will further aid the faltering sector. Asymmetrical distribution and increased competition for limited water resources, however, could temper Mexico’s potential for growth. Growth is still possible without addressing the problem, but it must be dealt with if Mexico hopes to fully utilize its geographic advantages, especially in the industrial and manufacturing sectors. In addition to the other obstacles that must be addressed, Mexico will need to make policy and behavioral adjustments to overcome its current water scarcity issues.

Mexico is constrained by its geography, which consists of a limited core territory located on a plateau, surrounded by difficult-to-control mountains, desert and jungles. Rivers cut across the terrain, headed to the Pacific Ocean, the Gulf of Mexico, the United States to meet the Rio Grande or the south toward Central America. Major rivers and lakes, including Lake Chapala and Lake Cuitzeo, provide surface water for Mexico’s 122 million people. Groundwater from 653 aquifers provides roughly one-third of Mexico’s approximately 460 billion cubic meters a year of natural renewable water resources. On paper, Mexico is not a water-scarce nation: It has 3,776 cubic meters of water per person per year. However, water is not equally allocated geographically.

Water stress is not a new problem in Mexico and the roots of current patterns of use can be traced back to the first half of the 20th century. “Ejidos,” or communal farms, were instituted in the 1930s and were eventually established throughout the country. Evidence of over extraction in the aquifers was first noted around the same time, and the problem worsened between the 1940s and 1960s during the Green Revolution, when technology transfers and financial aid were provided to the developing world and significantly increased agricultural production, including in Mexico. Today, agriculture remains Mexico’s most water-intensive industry, accounting for 77 percent of total use. The industrial and municipal sectors account for the remaining extractions. 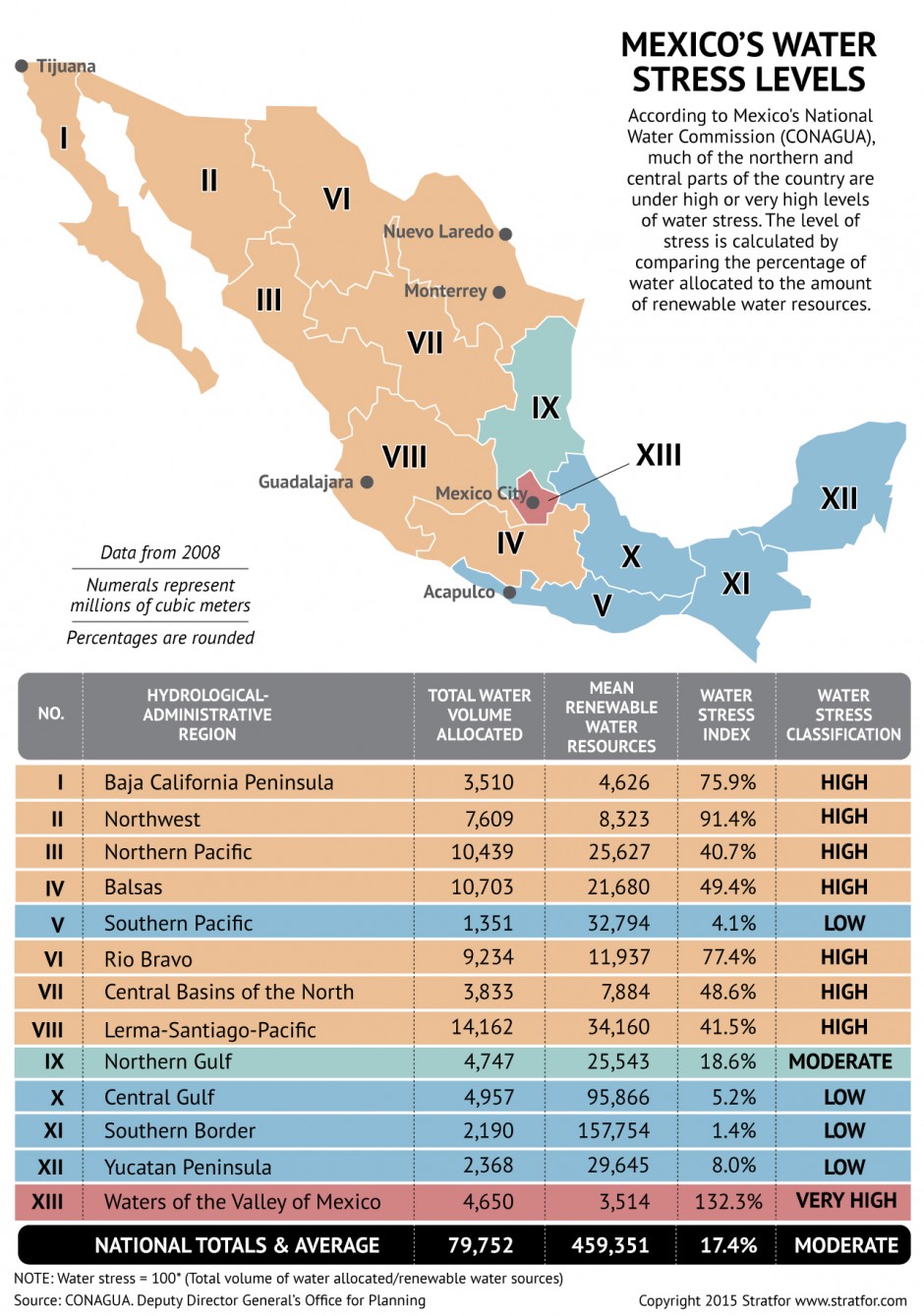 In the southeastern portion of the country — including in the Balsas, Southern Pacific and Lerma-Santiago-Pacific hydrological administrative regions — agriculture is the primary industry. The Lerma and the Balsas regions in Mexico’s southwest are both classified as high water-stress areas, and threats to the water supply could lead to social unrest as local populations protest actions perceived to threaten the water supply. A social organization in Cacahuatepec has already emerged to oppose a dam on the Papagayo River, and additional social instability could result if water availability decreases to the point where current farming practices are no longer profitable. Moreover, a loss in profitability could push agricultural communities to become more economically reliant on criminal activity.

Water stress is a limitation that Mexico will be forced to overcome to reach its full economic potential. Still, Mexico is on the verge of economic growth in the manufacturing and energy sectors in the coming years. Mexico’s increasing population and proximity to a large consumer base in the United States leave it poised for success as a manufacturing base. However, the growing population is a double-edged sword when it comes to water. Mexico’s capital, with a population of more than 21 million people in the greater metropolitan area, is representative of the effects of water scarcity and stress because of overuse in the nation. Mexico City’s water supply is insufficient. The water stress index there is high at 132 percent, and other studies indicate that extraction rates are even higher at about 182 percent of the supply, meaning that each year more water is used than is replenished by nature. Inadequate infrastructure and lack of wastewater treatment add to the pollution. The city requires water to be pumped in over large changes in altitude to meet demand — an expensive solution to what will only be a growing problem as the population increases.

The oil and natural gas industry will soon begin seeing the benefits of a recent constitutional changethat allows foreign investment into the country, a necessary step given the lack of technological know-how within and the mounting financial pressure on state-owned energy company Petroleos Mexicanos, or Pemex. The real prize from energy reform will be offshore deep-water targets that use treated seawater. Still, water competition could play a role if or when unconventional fields are developed in the northern and central parts of the country. While some of these contracts are currently up for bidding, larger levels of exploration and production will not occur for several years, by which point waterless fracking (or other water-efficient techniques) already utilized in the United States will likely become more prevalent. Moreover, low oil prices could delay bidding on some unconventional projects. In the short term, it will be the manufacturing, municipal and agricultural sectors that will compete the most for Mexico’s limited water resources.

The inception of the “maquiladora” program in 1965, bolstered by the North American Free Trade Agreement in 1994, has made manufacturing a key part of Mexico’s economy. The maquiladoras are manufacturing operations set up in free trade zones with tax benefits that import raw materials for assembly and then export to the large U.S. market. But these operations have worsened water stress as competition, especially along the border, has significantly increased water pollution. Industry consumes more than 3 billion cubic meters of water per year, and the increase in pollution decreases the usable supply, though it is difficult to determine to what extent. Pollution from industrial activity, stemming from things such as the solvents used in the manufacturing process, can threaten surface water sources by lowering the purity of the water.

Mexico’s industrial sector is already showing signs of its potential by shifting toward higher-end products such as electronics and automobile assembly. In Monterrey, electronics manufacturing is the largest industrial sector, but the San Juan Basin, in which the city is located, has less than 500 cubic meters of water per person per year. Groundwater sources in the basin are also showing signs of overuse. Still, manufacturing is expected to remain an integral part of the Mexican economy, and the industry will continue to compete for the limited water resources in the north.

There is a substantial framework in place to ensure the improved and appropriate use of water: the National Water Commission (Comision Nacional del Agua, or Conagua), a large agency that is the sole federal authority on water. The Law of National Water in 1994 sought to modernize the sector and decentralized management responsibilities. However, more than 20 years later, the implementation of efficient management is still a problem. Permits and other regulations are not readily enforced, overlaps in concessions and overexploitation remain and infrastructure is in disrepair or is inadequate in many areas. Furthermore, the federal water management budget is inadequate to fund the necessary modernization.

Much of the water in northern Mexico is subjected to water sharing agreements with the United States. Mexico is in a stronger position in terms of the flow of the Rio Grande than it is for its other major shared river with the United States, the Colorado River. However, the 1944 treaty, which governs shared surface water distribution between the United States and Mexico, decreases the amount of water available from the Rio Grande for use in Mexico, increasing competition along parts of the border. To better utilize the limited water resources and to mitigate future constraints because of water scarcity, Mexico City will likely need to adjust the water sector policy to increase investment, as it has done with energy and electricity. Investments into desalination plants could benefit coastal populations but are an expensive option, at least in the near term.

As for long-term solutions, there likely will not be a complete renegotiation of the 1944 treaty, which has only been modified through minutes to make relatively minor adjustments or clarifications. Without some sort of change, Mexico’s water stress levels will only continue to grow, and competition for water — though only one of many obstacles facing Mexico — could limit the country’s future growth.

Editor’s Note: This is the eighth installment of an occasional series on water scarcity issues around the world that Stratfor will be building upon periodically.

“Industrial Expansion Will Strain Mexico’s Water Resources is republished with permission of Stratfor.”